Spear
v · e
Gaius Worzel (ガイウス・ウォーゼル) is a member of the nomadic people of the Nord Highlands. He is introduced as a member of Thors Military Academy's Class VII.

Gaius is a nomad of the Nord Highlands with wavy brown hair tied into a short ponytail, tan skin and light blue eyes. he bears a strong resemblance to the rest of the members of the Worzel Family.

As a student of Thors, he wears the standard Class VII crimson uniform, in a similar alternative style to Elliot. His sleeves are kept rolled and wears sandals instead of shoes because of his homeland culture. He also has his own loose ankled trousers and wears a lavender sash around his waist.

Gaius's civil war outfit consists of a lined pattern long-sleeve shirt with the sleeves folded. Overtop is a dark crimson belted vest where his black trousers are overlayed with pants sleeves chained to his belt. He switched his sandals for normal shoes

After Gaius's long absence, he sports a more traditional fashion of a nomadic soldier. Replacing his crimson vest is a long dark crimson overcoat with white pants, boots and open-fingered gloves, with the style resembling that of his new occupation.

Gaius is a friendly yet level-headed individual, able to discern the true nature of things without prejudice. He is grateful to the wind and Aidios for the people he has been able to meet and the experiences that have come across his path. His personality is without any sense of discrimination, leading him to be heavily relied on by the members of Class VII. Within the group, he frequently acts as the voice of reason. He is a very devout follower of the Septian Church and Aidios as a result of his mentor's, Barkhorn, influence.

Gaius was born in the Nomadic Settlement in Nord in S.1187, to Lacan and Fatma Worzel. As their firstborn, he is the older brother to Thoma, Sheeda, and Lily.

Raised in the Nord Highlands, Gaius came from a part of the Empire isolated from the commoner/noble dichotomy, granting him a unique perspective on the class system that divided his class and the rest of his country. A level-headed and respectful ally, Gaius fought alongside Class VII to protect Erebonia from many threats during his time as a student.

Gaius is able to 'read' the wind in the sense that he is able to discern higher elements and feel the auras of his enemies. He is later revealed as being able to sense the 'Gale of Ruin', and ability which rarely manifests in the Empire.

Gaius learnt about the world outside Nord and the geopolitical situation of his hometown through monthly Sunday School lessons held by Barkhorn. Amazed by his mentor's knowledge, Gaius vowed to learn about the world as much as possible to better protect his homeland.

After the 3rd Armored Division was transferred to the Zender Gate on the border between Erebonia and Nord, Gaius met Lieutenant General Zechs Vander. Adamant that Gaius' skill would prove useful at Erebonia's most prestigious military academy after assisting him in obliterating a flock of monsters, seeing as Erebonia's cavalry's lance and spear training has their origins rooted in both the Eisenritter and the spearmanship of Nord, he gave Gaius a recommendation to attend Thors Military Academy.[2]

Having never left Nord before, the number of people he saw while transferring lines on his way to Trista threw him for a loop[3] and he saw Roer was one big mass of iron.[4] He was selected for Class VII and befriended Rean Schwarzer and Elliot Craig at the start of their orientation. Gaius joined the Art Club to improve his skills as an artist.

Offering an 'outside' view to Erebonian society, he interrupted another discussion between students born noble and commoner by pointing out fundamental problems in Erebonia's class system, which in turn served as an eye-opener for those around him.[2] During their field trip to Legram, Gaius realized that the people of Nord and Legram worship both Aidios and the animist spirits, despite the difference in culture and tradition. Protecting those traditions by levying through taxes is worth it, he continues to argue.[5]

During the Erebonian Civil War, he returns to the Nord Highlands to help protect the region from the conflict. After Rean Schwarzer and the rest of Class VII come looking for him, Gaius decided to team up with again and helps put an end to the civil war together with the crew on the Courageous.

Although the civil war within Erebonia has ended and Gaius returns to the Nord Highlands to help the nomads recover from the war, he finds out that Erebonia's annexation of Crossbell has lead to a constant conflict between the Imperial Army of Erebonia and the Republic Army of Calvard both near the Tangram Hills east of Crossbell as well as in the neutral territory of Nord.

Having protected Ordis during the civil war, Barkhorn noticed Gaius' anxiety over the future of his homeland and decided to visit him in Nord. Gaius had only just explained that the destructive wind blowing across the highlands gave him a bad feeling, when a Republic aircraft broke through the 7th Armored Division's line of defense and began attacking the Nomadic Settlement.[6]

Afterwards, Gaius's mentor, Barkhorn, died protecting Gaius and the Highlands from Calvardian threats. In his dying moments, Barkhorn, then the 8th Dominion of the Gralsritter wing of the Septian Church, passed his Stigma down to Gaius. This caused Gaius to inherit Barkhorn's position as the Eighth Dominion, at which point his title became the Soaring Phoenix (絶空鳳翼).[6]

Thomas Lysander, the other Dominion known to be operating in Erebonia, guided Gaius to Arteria where he would be trained for the next half year during which his friends from Class VII were unable to contact him.

Along the way, Gaius settled on his alias as a Dominion which he reveals to everyone before his battle with Emma Millstein and Laura S. Arseid against Arianrhod and McBurn in the Gral of Erebos.[6]

“Once again, I swear to protect both Nord and this country, my second home.”
— Trails of Cold Steel IV

Throughout Trails of Cold Steel IV, Act 2: "Guiding Starlight", Gaius offers his inherited Merkabah as Class VII's primary mode of transportation. Being a new Dominion, his Merkabah was understaffed - it is unknown if Barkhorn had other squires. To help alleviate the shortage of manpower, Thomas had his squires, among them Rosine, to help operate Gaius' Merkabah until a new crew could be found.

Gaius decides to spend his last night before the World War with Linde, with whom he participated in the Art Club as students.[7]

During the World War, like the rest of Class VII Gaius joins Prince Olivert Reise Arnor's operation Radiant Wings. His father Lacan and brother Thoma are also assisting with the operation, starting by evacuating the nomads to the comparatively safe northern area, leaving Gaius assured about the safety of his mother and younger sister.[8]

Hearing about the disappearance of Olivert Reise Arnor and Scherazard Harvey, Gaius starts a search for them in their rumoured location- the Nord Highlands. He and his siblings greet Rean at their settlement when the latter comes to assist in the search. Gaius explains that he had been riding around the highlands but had not yet been able to determine any clues, but he had found evidence of campers from remains of fires and food packaging. Gaius accompanies them to the watchtower where they face off against a simulacrum of Arios MacLaine.

The news that a battalion of Calvardian tanks are heading for Nord spurns Gaius and the 23rd Armored Division into action, although they feel something is amiss. Gaius orders an emergency evacuation. After confronting the tanks, they find no signs of life, and the tanks seemingly automated. Zeo signals the news that the settlement is in danger and they rush back. Afterwards, they search the Highlands in a massive operation and eventually discover the Courageous II, cloaked. After freeing the crew and prince, they escape and continue the operation to stop the 23rd Armored Division's ambitions. Gaius uses his Merkabah to block a unit of Calvardian tanks. Soon after, Gaius witnesses Rean save the settlement from an automated Railway Cannon with his Tyrfing unit and the subsequent appearance of a Great white Divine Knight which disabled the Courageous II and Merkabah's engines. They are saved by Zeit.

Gaius is part of the group that infiltrates Reverse Babel in a joint effort to take out Elysium.

Hollow copies of Gaius are fought in the Infinity Corridor; once alongside hollow Wallace Bardias and once more in a group with fellow dominions Thomas Lysander and Wazy Hemisphere- both hollows.

After Barkhorn is found alive by Celis Ortesia and Rion Balthazar in Calvard, Gaius is mentioned to have been asking them about him. He is present at the gathering of Dominion in the New Year in Arteria, understandably overjoyed to see Barkhorn again. 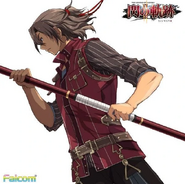 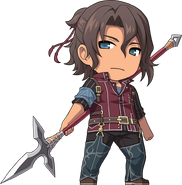 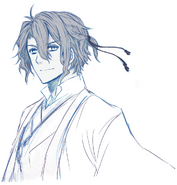 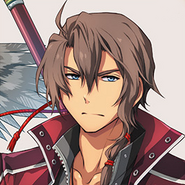 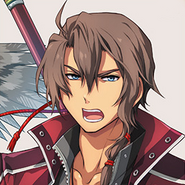 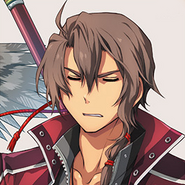 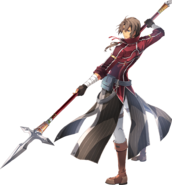 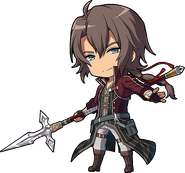 Promotional Screenshot of Gaius with Fatma Worzel and Thoma Worzel