Gareth is a middle-aged man with spiky brown hair, blue eyes, visible stubble and a scar across his right eye. He wears a variant of the Red Constellation's gear: several red armor plates over baggy black and green clothing. His shin armor guards are pointed and more detailed compared to other members' uniforms. Various pouches of ammunition and explosive equipment can be seen on his person. Gareth uses a large sniper rifle in combat.

Despite his rough appearance, Gareth is respectful and extends a great courtesy to those he converses with. He is pragmatic, relying on ambush techniques and taking his opponents unawares in a combat situation. He regrets the loss of former commander Baldur Orlando and passes on his condolences to his next of kin.

As an exceptional sniper, Gareth has long served as the right-hand of Baldur Orlando. He often works with fellow commander Shirley Orlando.

Gareth is amongst the Red Constellation forces arriving in Crossbell after being hired by Giliath Osborne to provide security for the West Zemuria Trade Conference. He takes part in the systemic execution of terrorist forces. He greets Randy and expresses his condolences for Baldur's death.

Gareth helps lead the Red Constellation's attack on the resistance in the Mainz region, and had pinned them down ready to finish the job before Randy Arrives and attacks him. Gareth is pretty confident in winning against Randy's stun-halberd but soon recognises he is outclassed when Berzerga comes out, stating his precision had been knocked off by the first blow. He is also sent into withdrawal when a band of white wolves ambushes them. Gareth muses their defeat comes at the hands of their lack of owning aerial supremacy.

Gareth appears in Hamel from up on a ledge, providing covering fire to Shirley. Shirley claims he is there as her father wanted her to have some more protection whilst in Erebonia. They leave together and Gareth is not seen again until the red Constellation operation to guard the Railway Cannons that are firing upon Ordis. Gareth is also present guarding the Gral of Erebos with the rest of his corps.

After the Great Twilight, Gareth's first appearance is to pin down Aurelia Le Guin in the Osgiliath Basin and prevent her from assisting the others. They retreat when the Pantagruel is unveiled. He next almost snipes the male team on the Pantagruel when he lands as part of a boarding party. He is fought, but temporarily withdraws with a flash grenade before later redeploying on the main deck.

Gareth attends the memorial event for Rutger Claussell, bringing along the Jaegar King's favourite bourbon. Per Sigmund's request, he ensures that Shirley does not get any alcohol or tobacco.

In S.1207, Gareth was asked by Shirley to help train Cedric Reise Arnor. Working with Gilbert Stein, the commander of the 6th Enhanced Jaeger regiment, the two groups were sent to the Temple of the Moon to begin the training session. When Cedric hesitated to start the session, Gareth fired a warning shot at his feet to force him. Cedric was eventually able to realize what had been holding him back and eventually reached the two commanders, where Gareth supported Gilbert from afar.

Cedric defeated Gilbert and was satisfied with his victory. Gareth was also satisfied with how fast the fallen prince had matured, only to become upset when Gilbert refused to accept the loss and summoned his G-Apache. He tried to intervene, but Shirley appeared and ordered him to stand down. Gareth watched as Cedric defeated Gilbert a second time.

When Crossbell's rebels attacked the city to retake it from the Supreme Leader and the Black Guard, Gareth was contacted by Dieter, who requested his services. Gareth was impressed that Dieter reached out to the corps again and accepted the lucrative offer, working with the rebels to liberate the city. 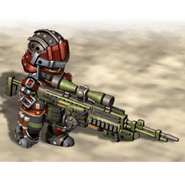