George is a young man with a large figure. He has messy brown hair and eyes and quite a pronounced nose. During his time at the academy , George wore yellow overalls, working boots and goggles. Following his graduation and subsequent 'travelling' across the continent, George wore a mustard coloured shirt, covered a black and white shirt worn unbuttoned and a long cream coloured coat with deep pockets. He wore loose working chaps and leather boots.

Possessing a brilliant mind, George displays a happy and helpful personality. He cares about his friends and is willing to do his all in supporting others.

Behind the scenes, George served as a Gnome, maintaining his friendship with the others as a simple farce to cover his true duties. Initially shown to be cold and calculating, George's time with his friends caused him to significantly falter. Whereas he would complete orders with no questions asked, if they involved his former friends, he would often have doubts and somehow find a way to allow them to survive. After being released from the Gnomes' service, George realized his errors and although he was warmly welcomed back by his friends and resolved to carry on, he continues to be ashamed of his own actions.

He has been friends with Angelica Rogner, Towa Herschel and Crow Armbrust since his 1st year at Thors Military Academy. He is G. Schmidt's third student.

George is in his second year at Thors and is the Head of the Engineering Club. He helped design the ARCUS units and offers his services to Rean Schwarzer and Class VII as an Orbal Engineer. Over the course of the game, it is revealed that he has also been helping out with other new Orbal technological patents (such as the Orbal Bike) and has been friends with Towa, Crow, and Angelica since their first year.

After Angelica is forcibly removed from Thors, he continues to maintain her bike.

During the Occupation of Trista, he helps Towa escape from Trista. He is deeply shocked by Crow's betrayal.

During the Erebonian Civil War, George reappears with the Courageous. He serves as Valimar's main mechanic from hence on and helps to create a sword out of Zemurian Ore. During this time, it is also revealed that he served as Professor Schmidt's apprentice during his time at Roer Institute of Technology.

When Rean and Class VII reclaimed Trista, he built another Orbal Bike for Angelica.

After graduation, George travelled around to various Orbment research facilities e.g. Zeiss Central Factory in the hopes of improving his skills. At the end of his tour, he is said to have visited the Verne Company to meet Professor L. Hamilton.

Two years after the civil war, George returns to help out Rean Schwarzer with defeating Osborne and Ouroboros' plans. However, it is later revealed that he is a double agent working for the Gnomes in order to reform the Great One. When Ordine was handed over to the military, George had accompanied it as a "helpful mechanic". However, the Azure Knight ended up in different hands. He also arranged the funeral service for Crow Armbrust, but the body used in the funeral was a dummy prepared by the Gnomes. This was done so that Alberich could obtain Crow (in the form of Azure Siegfried) and Ordine.

After meeting with Siegfried, who disturbingly reminded her of Crow, Angelica set out to find out the truth, learning that George had never went to Calvard or visited L. Hamilton. When Angelica notices this, she heads to Himmel Cemetery to confirm the true identity of the body and confronts George there. Alberich is also present and orders George to get rid of Angelica as she knows too much; George apparently complies with the order.

As Rean destroys the Nameless One, George activates the trigger for the explosive devices that he hid on the Courageous and destroys it. George then tells a shaken Towa that he had killed Angelica. Sinking to her feet, Towa doubts George could have killed Angie and claims that George is probably holding her captive in the Gnomes' headquarters. Introduced as Copper Georg (銅のゲオルグ), he accompanied by a red combat shell, named Naglfar (ナグルファル).

Instead of killing Angelica as ordered, George intentionally missed her vital parts, allowing her to survive. He proceeded to have a mask placed on her, turning her into the Red Rossweisse. He confronted the teams at the Black Workshop and later participated on the attack on the Pantagruel.

George battles alongside Sharon when the ship they are on is raided by Class VII to start the Second Rivalry, only to be defeated. Alberich then deployed a Leviathan Zauber Soldat, much to his surprise. The Leviathan soon went berserk after being severely damaged, attempting to target Irina Reinford and G. Schmidt. With Sharon restraining the Leviathan, George then had Naglfar destroy the Leviathan, which crashed onto the shield generator and caused the Draco Shrine to appear prematurely for the Second Rivalry. Seeing this, Alberich dismissed George from the Gnomes, who then attempted to commit suicide to atone for his sins, but was stopped by Angelica. With encouragement from his former classmates and Schmidt, he decided to carry on, teleporting away, but reassured them he would help when the time came.

Following the appearance of the Tuatha De Danann and five supporting Salt Pales, George informed the group that it was called Tuatha De Danann, the Gnomes had been refurbishing it for thousands of years and that it would bring about the conclusion of the Great Twilight. Remorseful for blowing up the Courageous, he admitted that he could not stand by and accept what was wrong like Alberich did. He offered to join one of the teams infiltrating the Salt Pales, accompanying Angelica, Sharon and Roselia.

The day before the operation to infiltrate the Salt Pales began, George arrived at Mishelam Wonderland and reconciled with his former classmates.

He later attended the wedding of Olivert Reise Arnor and Scherazard Harvey.

After Millium was revived, she was upset that her combat shell, Lammy, had not returned with her. George was able to find a section of the workshop that contained Lammy's core, but the area had been overrun by generic shells and OZ Mirage units. To assist Millium with reclaiming Airgetlam, George temporarily loaned Naglfar to her. 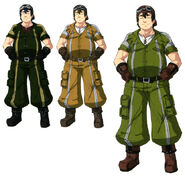 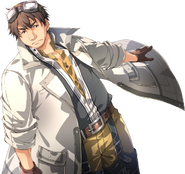 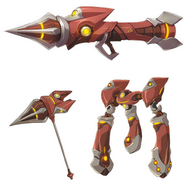 Hello there, beautiful. May I have a moment of your time?
Please be aware spoilers for Trails of Cold Steel III and IV may be present in the following section. Hit [Show] on the right if the show must go on. Adios, amigos!
There we go, the end of spoilers. Thank you for your time!