v · e
The Gnomes () are a clan of artisans that descended from the civilization that inherited the Lost Zem prior to the Great Collapse. The Gnomes use the Black Workshop (黒の工房), one of the Thirteen Factories, as a front for their operations.

Before the Great Collapse, the Gnomes, at that time called the Kin of Earth, received the Lost Zem from the Goddess. Under its watchful protection, their society flourished, until one day they came in conflict with the inheritors of the Ark Rouge.

Following the great battle that ensued, the Ark Rouge and Lost Zem fused to form the Great One. Realizing that this power was too great for humans to control, the Kins of Fire and Earth worked together to seal the Great One away, with the Kin of Fire splitting the power into seven fragments, and the Kin of the Earth crafting seven vessels for those fragments. Following this, they renamed themselves to the Gnomes.

In the Dark Ages, during the Dark Dragon incident, the chief of the Gnomes persuaded the elder of the Hexen Clan to guide Emperor Hector I to become the Awakener of the Divine Knight Testa-Rossa. The elder of the Hexen clan reluctantly agreed, and Zoro-Agruga was slain, but there were many casualties in this incident, including the Emperor and the Hexen Elder, and both Testa-Rossa and the Holy Beast of Earth were afflicted with the curse.

Following this, the chief of the Gnomes approached the new Hexen Elder, Roselia, as well as the Emperor, and spoke to them about a Prophecy of the World's End, before formally cutting off contact.

For the next 700 years, the Gnomes were never seen, however it is said by Roselia that they were secretly behind many of the incidents that plagued the Empire since.

The Black Workshop was first mentioned in Trails of Cold Steel II. Despite efforts of the Imperial Army's Intelligence Division's efforts to locate the Workshop, its current whereabouts are unknown. Chancellor Giliath Osborne is known to have done business with the Black Workshop through the Intelligence Division, but connections were supposedly shut down around the end of S.1203.

Trails of Cold Steel III reveals the true identity of the Black Workshop as the Gnomes. After the corruption of their Holy Beast of Earth, the Gnomes vanished from Erebonian history in the fourth century after the Great Collapse. They resurfaced several centuries later under the alias of the Black Workshop in preparation of their Great Twilight in collaboration with Giliath Osborne. By this point, the leader of the Gnomes, Black Alberich, had taken over the body of Franz Reinford and the only other member revealed to be working with him was George Nome who remembered his true identity as a gnome after Crow's death triggered it.

Following the assassination attempt on the emperor caused by the Erebonian Curse, they begin to put their plan into action and eventually succeed by causing the death of their holy beast and starting the great twilight. Following this, they capture Rean Schwarzer and keep him prisoner at the Black Workshop.

After Class VII locate the Black Workshop and rescue Rean, they eventually learn the truth that both Giliath Osborne and Black Alberich are working for Osborne's divine Knight Ishmelga and that Alberich's goal is to place the whole world under the curse of the Great One so everyone would be under Ishmelga's control. Following George's defeat prior to the second Rivalry, he decides to help Class VII and their allies to atone for his sins after he helps stop Alberich's Leviathan from killing Irina Reinford and G. Schmidt with the help of Sharon Kreuger.

During the day of the Great War, Class VII invade the Empyreal Fortress and fight Black Alberich and Rufus Albarea during the fifth rivalry. After defeating Alberich, Franz Reinford begins to regain control of his body for a short time before he is taken over again and leaves. During the final rivalry, Alberich asks Osborne to hold off until later in the war to start the rivalry before Osborne stated there is already enough conflict to start it. Following Osborne's death in the normal ending of Cold Steel IV, Alberich shows up to inform Class VII that Rean will now be taken over by Ishmelga before he leaves again. In the golden ending of the game however, Franz Reinford manages to fully retake his body from Alberich and convinces Rean to use the blessing of the holy beast of earth to expel Ishmelga from his body and kill him. Following Ishmelga's death, Franz Reinford and Roselia use the Sacrament program from the Sept-Terrion to revive Crow Armbrust and Millium Orion. However Franz begins to die since the program only works on those who were Immortal for only a short amount of time and he became one over ten years ago. Before he dies however, he and his daughter Alisa Reinford say their goodbyes to each other and that they love each other.

The Gnomes are responsible for building Spirit Shrines across Erebonia. Built on top of septium veins, they were constructed to encourage the formation of massive Zemurian Ore crystals. These crystals were in turn used to create the Divine Knights.

One of the Divine Knights, Valimar, confirmed that the Old Schoolhouse behind Thors Military Academy was also built by the Gnomes. It demonstrates the incredible technology the Gnomes worked with, such as large-scale phase space, the expansion of flexible materials as well the development of the trial system Class VII faced in Trails of Cold Steel.

They are also responsible for creating the Originator Zero units Millium and Altina Orion. Cultivated in tubes, the girls were adjusted to link with combat shells, for which the Black Workshop is also responsible, and afterwards sold to customers. Millium gained consciousness in the care of Chancellor Giliath Osborne in S.1199 and the Ironbloods whereas Altina was ultimately "loaned" to the Noble Alliance during the Erebonian Civil War. This was ultimately revealed to be a ruse however, as Osborne had managed to secretly subvert control of the Black Workshop away from the rest of the Thirteen Factories by S.1204 and had Altina dispatched to aid the Ironbloods' primary member Rufus Albarea in his mission to weaken the Noble Alliance from within.

The greatest creation of the Gnomes is the Empyreal Fortress, the Tuatha De Danann. It is the fortress they used in their clash against the Kin of Fire during the Great Collapse, and has been renovated by the Gnomes for the past thousand years. 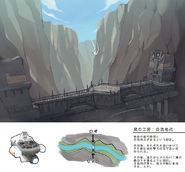 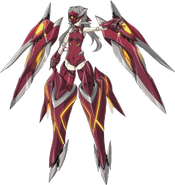 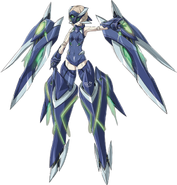