To participate in this battle, the treasures took the form of two giants. The battle was said to shake the very earth itself, and brought calamity to the land. The two civilizations, having realized their mistake, made peace with each other, but it was already too late. The giants had been locked in an eternal struggle, and their battle could not be stopped. This battle continued until both titans had exhausted their power. The remains of the fire titan were enshrined on Bryonia Island, while the remains of the earth titan were brought to the Nord Highlands.

Their spent power resulted in the creation of the Great One, which governed both Fire and Earth. Realizing that this is something too powerful for human hands, the factions collaborated to seal the body of the Great One in a higher plane. The Kin of Fire worked to split the remaining power into seven fragments, while the Kin of the Earth crafted seven vessels for the fragments of power. These vessels became known as the Divine Knights. Afterwards, the factions changed their names. The Kin of Fire renamed themselves to the Hexen Clan and the Kin of the Earth to the Gnomes.

One of these Divine Knights, Ishmelga, became obsessed with the Great One's power and sought to conquer Zemuria. Ishmelga spent thousands of years making arrangements to do so, but most of it had been taken by Argres, who realized the threat it posed. By S.1206, it had acquired enough resources in order to begin its plan - the Gnomes, under the leadership of Black Alberich, and small amounts of its curse that lingered in the Empire's territory.

Throughout the game, Ishmelga's attempts to forge the Great One once more are constantly thwarted by Class VII, with Valimar and its Awakener, Rean Schwarzer, with the resulting Rivalries being rushed well before the ideal time. After the final Rivalry, Valimar and Rean defeat Ishmelga and Osborne. Seeing Rean as a substitute for Osborne due to the pact it made him, Ishmelga dove into Rean's soul and attempted to overpower him to gain full control of the resulting Great One.

Rean's visit to the Sanctus Shrine before the final Rivalry started meant that he had Argres's power, the Earthen Prison [JP 1] . When Franz reminded him to use what the Holy Beast gave him, Rean realized its purpose and with the help of his friends, managed to purge Ishmelga from himself.[1]

Doing so, both Valimar and Rean return to normal. From the rejected remains, Ishmelga's thoughtform merges with the Great One, creating Ishmelga-Loge, an incomplete and severely weakened, but still very powerful, version of what the Great One would actually be. [1]

After a brutal battle, the group manages to destroy the Great One's body. Ishmelga abandons it and tries to escape into a different dimension but Rean pursues it. Together with Millium, Rean cleaves the thought-form in half, killing Ishmelga for good. Rean returns to his original dimension with the news that Erebonia has finally been released from the curse.[1]

Through the singularity Elysium, the Great One is once again manifested as a calculation of what could have happened if Ishmelga would have succeeded in fusing with Rean and Valimar after the final Rivalry,[2] building on what the player witnessed during Trails of Cold Steel IV's normal ending. The creation of the Great One should not have been possible, and its resulting creation caused the singularity to malfunction and allow it to gain control over the system. It attempted to purge the singularity's AI, Lapis, but was unable to do so.

The result is Zoa Gilstein, the Zero Knight (《零の騎神》 ゾア＝ギルスティン), which is introduced as an eighth Divine Knight that should not exist yet unexpectedly appeared after the disappearance of the other seven. Ishmelga-Rean, the fusion of Rean Schwarzer and Ishmelga, serves as Zoa Gilstein's Awakener.

From the shadows, the Great One takes control of Crossbell through the singularity, creating puppets to do its bidding, along with massive weapons of destruction meant to subjugate Zemuria under the pretense of a "Crossbell Unified Nation". Its plans are thwarted once more by the protagonists. 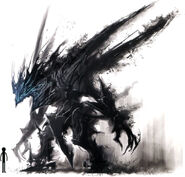 The Gods of Creation form their shells

The birth of Steel

Combat details of boss Great One