Male
v · e
Grianos (グリアノス), also known as the Azure Guardian (蒼の守護鳥), was the familiar of Vita Clotilde, the Second Anguis of Ouroboros.

In his regular form, Grianos is a small royal blue nightingale like songbird with turquoise tips on the wings and tail. His breast contains some yellow feathers. His Aura form is much larger, featuring a cockatrice like neck and scaly segments. It also has metallic prongs and armour plates.

Grianos is one of two familiars created by Roselia, the Hexen Clan elder; the other familiar was Celine. He takes on the form of a bird and is incapable of human speech. He has been with Vita since she was young and growing up in the Hexen Clan village. He mostly as the medium through which Vita sends her magic through (akin to a projector), and Vita also uses him to keep an eye on targets. Like Celine, he is presumed to know and use magic.

By using the spell Savant Valse (), Vita is able to pour an incredible amount of mana in her familiar, allowing Grianos to grow into Grianos-Aura (グリアノス＝アウラ), a monstrous bird which is capable of summoning gale winds with its wings.

Vita is seen sporadically, and when sighted by Rean, Emma rushes off to chase after him, knowing the connection to Vita. At the first attack of the Noble Alliance, Grianos flies to Vita as she reveals herself and uses his projection abilities to display what is going on in the capital.

During the October War, Grianos was most often used by Vita to help her project her image over long distances and relay images. In one of the Spirit Shrines, Vita sets Grianos on Class VII as a sort of test, transofrming him into his Grianos-Aura form.

At the end of said war, Grianos was killed in the Infernal Castle by Rufus Albarea upon him revealing his true allegiances.

One of his feathers came into the possession of Musse Egret, who used it to teleport out of the Gral of Erebos when the Great Twilight began.

Vita is looking into the possibility of reviving Grianos, and she becomes capable of summoning a spiritual version of him. 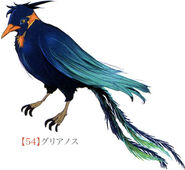 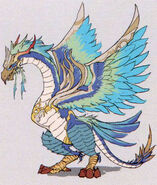 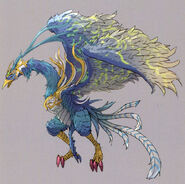