Gustav is a grizzly middled aged man with blue eyes and bright blue hair which is spiky and tied up with a red cloth bandana. He wears a set of orange overalls and leather work boots, beneath which a blue shirt can be seen.

Gustav is a big, strong and dependable individual. He is also quite capable of thinking on his feet, for example, throwing Antoine into one of the containers to serve as a diversion from the crate Estelle and co. were hiding in.

Gustav has been working at the factory for a long time and is a capable mechanic. As stated by his role, his job requires for him to oversee the maintenance of big machines and big projects and regularly cooperating with the military in repairing equipment

During the kidnapping of Albert Russell, Gustav is requested by Factory Chief Murdock to sneak Estelle and co. into Leiston Fortress.

Gustav is first introduced when Factory Chief Murdock leaves the Bracer Guild to inform him about Professor Russell's rescue operation. Prior to this, he is mentioned a couple of times and it is revealed that he has been out working on repairs at Leiston Fortress before coming back to Zeiss.

After Estelle and co. are ready to head to Leiston, Gustav is first seen moving the maintenance ship over to the landing dock's flight bay. Coming out of the ship, Gustav greets everyone and tells Tita that he heard about what happened from Murdock. He then instructs everybody to get on-board, having already prepared everything in advance and then they ship out.

In the air, Gustav instructs the group on how they are going to sneak them into the fortress and warns them that it's gonna be a tight squeeze for everyone. After that, he gives Estelle and co. free time until they get closer to the Fortress and informs Agate on where he'll find the Orbal Device repair station. After a while, the airship gets closer to the fortress and Gustav calls the group back. He then opens the secret entrance and asks everyone to squeeze in. After they get in, he then closes the door and wishes them luck before fully closing it.

Arriving at Leiston, Gustav greets Maximillian Cid and they exchange greetings. Maximillian then compliments Gustav on his fast timing and Gustav replies that it is because the military are his best customers. Gustav then asks him what happened and Maximillian blows it off as something minor. He also tells Gustav that they have gotten closer to figuring out who attacked Zeiss Central Factory. Gustav expresses his relief about the news and inquiries about Professor Russell. Maximillian tells Gustav that the kidnappers are requesting a ransom, so he is probably safe.

Maximillian then tells Gustav that they have to perform the scans now for the sake of procedure and orders his men to perform the check. As the men are scanning around, they come across something in one of the cargo boxes. Gustav explains that its probably a mouse, but Maximillian still orders it open. Opening the box, a cat jumps out. Seeing him, Gustav explains that the cat is Antoine who is like the official pet of ZCF. Gustav then scolds Antoine who runs back into the Leibnitz. After joking around for a bit, Gustav finishes his repairs and leaves.

Gustav is then next seen meeting Estelle and Joshua after the rescue. Gustav tells the pair that he heard that the mission was a success from Murdock and thanks the pair for rescuing the Russells. Joshua then asks if the stunt with Antoine was on purpose and Gustav laughs and said that it was. He then asks the pair why they are at the docks and they tell him that they are supposed to take an airship to Grancel.

Gustav notices that the airship is late, but tells the pair to rest up before leaving. Suddenly, Gerald, a worker arrives with a emergency message for the group. Gerald explains that they received a communique from the airship corporation with orders that all airships are to grounded for inspection by the military. Gerald then tells Estelle and Joshua to wait at the Bracer Guild until he contacts them and leaves.

Sighing, Gustav states that he is going to have to tell Murdock about the Leibnitz's grounding and inspection. He then tells Estelle and Joshua to be careful and leaves in the direction of the Factory Chief's office. He is not seen from again for the rest of the game, but Murdock mentions later on in Grancel Castle that he is doing okay.

Gustav is brought to the Arseille engine room to perform maintenance and repairs, a prospect he relishes, stating 'his heart skips a beat' every time he sees it. He is installing a newer model engine onto it -The XG-02. he wishes the party good luck in investigating the earthquakes plaguing the region and finds the source of them being the Elmo hot springs creepy.

The Orbal Shutdown Phenomenon causes a lot of work for him, as it effectively shuts down the port.

Gustav plays a key role in the excavation work and clean-up of the fallen Liber Ark in Valleria Lake. He directs the machinery that is pulling up debris and ruins from the lake, salvaging anything that might be of use. 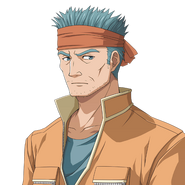 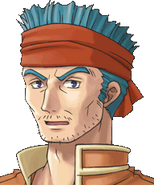 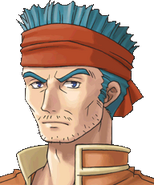 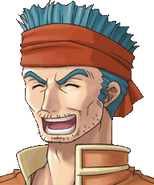 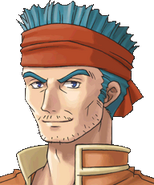