Tonfa
v · e
Guy Bannings (ガイ・バニングス) was an investigator for the Crossbell Police Department until his death in S.1201.

Guy was a tall young man with brown eyes, thick wavy brown hair and thick eyebrows. He wore a red shirt, jeans and white and red sports shoes, with a brown and white jacket and white fingerless gloves as well. Around his neck was a silver dog tag.

Proud of his exceptional achievements, Guy was a highly spirited duty-driven police investigator. From his reputation, it is clear that he was thought highly of and that he would pursue the ideals of justice no matter the cost or danger to his own person.

During the information war between Erebonia and Calvard, his parents died in an aircraft accident, leading him to raise his younger brother alone.

Guy started working at the Crossbell Police Department, where he teamed up with his superior Sergei Lou and partner Arios MacLaine. The three of them teamed up to become a highly capable force of justice in Crossbell renowned for their excellent achievements in the world of policing. Guy's contributions were recognized and rewarded with a transfer to the First Division.

While acting within the First Division, Guy's inexhaustible dynamism was unprecedented and he was seen as a one-of-a-kind policeman by his colleagues.

When he caught wind of the Crois family's Azure-Zero Project, he started a thorough investigation which led him to suspicions regarding his former partner Arios. Arios called out Guy to the Orchis Tower construction site to confront him over his knowledge of the Project, and once there Guy attempted to have Arios give up on the plan. Arios refused and began a fight to the death against Guy. Even though Arios had the upper hand in combat skill, the two fought to a draw. Guy called for a cease-fire during a pause in the action, trying to avoid a violent resolution.

Just as Arios was willing to stop fighting and listen to what Guy had to say, lawyer Ian Grimwood, leader of the Azure-Zero Project, intervened and shot Guy in the back from the shadows. With his last words, Guy warned Ian that his "successor" will show up one day to face him.

He had also investigated both Revache and Joachim Guenter's activities, with Revache's don, Marconi, considering Guy a "pain in the ass". Joachim had hired Revache to get rid of Guy before he could discover his plot, but when the mafioso arrived, Guy was already dead. Guy died in the line of duty in S.1201, leaving behind his brother Lloyd and fiancée Cecile Neues.

After Guy and Lloyd managed to meet each other in the World of Zero for one last time, he encouraged his brother to continue growing and, at long last, managed to say goodbye. 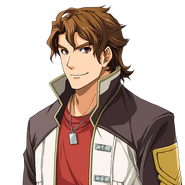 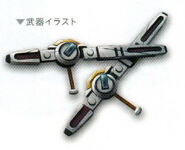 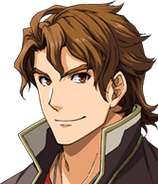 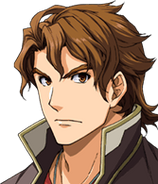 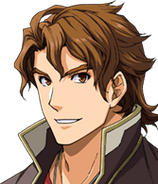 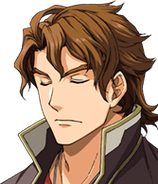 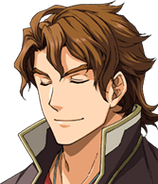 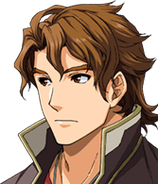 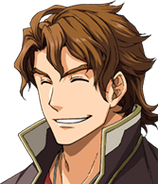 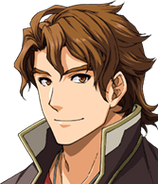