Harold is a tall man with brown eyes and hair in a shade of bright pink. He wears a brown coat with a yellow hem over blue trousers, white shirt and red sweater. Around is neck is a pale indigo neck-tie. Harold is also seen wearing the uniform of the Imperial Army of Erebonia at one point.

Harold is loved by his family and customers alike. he always strives to do the best he can for his family and his duty to his country, but has been faced with some terrible decisions that have tormented his mind and left a hole in their family. Nevertheless, he strives to help others wherever possible and acts with both leadership and thoughtfulness.

Before Colin, however, Harold and Sophia had another child: Renne, born in S.1192. Harold had just started working as a merchant. The aggressive growth of Crossbell's trading market, however, made it impossible for him to run an honest business and he ended up with enormous debts. They ran from the creditors, taking Renne with them. At one point, they feared that the mafia would hunt them down and decided to temporarily entrust Renne to an old, trustworthy friend living in Calvard until her parents had paid off all their debts.[2]

Following the advice of a reliable lawyer, he managed to clear his debts within a year by rebuilding his professional network from scratch. When they went to Calvard to pick up Renne again, they found their friend's house burnt down. Arsons and organised burglaries were common in Calvard during the mid S.1190s and authorities were late to arrive in the remote region. Autopsy reports concluded that all inhabitants of the house had died.[2]

Devastated that they had lost their daughter, they lost their will to live and considered committing joint-suicide. Around that time they discovered that Sophia was pregnant with Colin, which reinvigorated their willpower to live and continue their life as honest traders. Although Colin brought them happiness, they continued to live burdened by the sin of abandoning their daughter. [2]

Harold lives with his wife Sophia and son Colin in the Residential Street in Crossbell City.

When Colin went missing, Harold went to Special Support Section and pleaded with them to find his son. During their search, the team was assisted by Renne, where they saved Colin from a group of monsters. Lloyd then informed Harold that his son was safe, and he came along with Sophia. Colin came to sometime later, wondering where the "girl with purple hair like Papa's" went. Harold wondered if it was their daughter and he told them about their daughter, who they presumed was dead. Unbeknownst to the three Hayworths, Renne had been hiding in a closet in the same room. Regardless, he was grateful for the girl's assistance and hoped to see her in person in the future.

Harold continued to work as a merchant despite Erebonia's forced annexation of Crossbell. Following Ash Carbide's shooting of Emperor Eugent Reise Arnor III, Giliath Osborne framed the assassination attempt on Calvard, with the Central Council of Erebonia unanimously passing the National Mobilization Law to prepare for war. Harold was conscripted and was worried about leaving his family behind, but a memento by Colin and words of encouragement by Renne (who he did not recognize as his daughter despite their shared purple hair) before his group left for Tangram Fortress.

Harold managed to survive through the Great War on the first day and reunite with his family. On the day of re-independence ceremony, due to the simulacra of Rufus Albarea occupying the entire city with the black guards, he had to escape the city with his family. Thanks to Mireille taking shots from the terrorists, many citizens managed to flee to Mainz and took refuge there, including Harold and his family. While his wife tried to perform any possible first aid treatments for Mireille, he tried to aid the other refugees and Guardian Force in supplies. 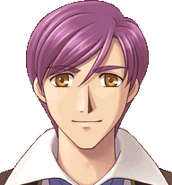 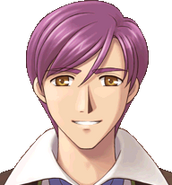 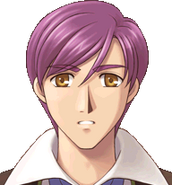 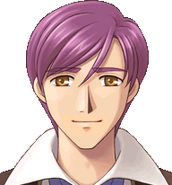 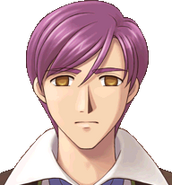 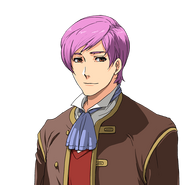