178cm.
v · e
Hartmann (ハルトマン) is a former Speaker of the Crossbell government.

Hartman is an elder man with brown eyes and greying black hair, with a streak of silver running through. He wears a black suit with a gold trim above a grey collared shirt with a purple cravat. The cravat is pinned with a golden brooch with an inlaid ruby.

Hartman is an intimidating figure and a taste for the grander things in life. He is morally corrupt, falling to the temptations provided by the D.G cult and being susceptible to manipulation by them as a result.

Hartmann was born into nobility in Erebonia. With the family's fortune, he bought himself an enormous mansion on Mishelam.

In Crossbell, Speaker Hartmann represented the Crossbell government alongside Mayor Henry MacDowell in the form of a joint representation. Whereas Speaker MacDowell maintained politically neutral, Hartmann led the pro-Imperialistic movement within the government. He was also responsible for declining Mayor MacDowell's reform proposals.

In the spring of S.1203, he had a private conversation with Chancellor Giliath Osborne of Erebonia.[1]

While serving in this position, he also supported Revache and was involved in their smuggling and money laundering. Hartmann was frequently invited to Paradise, one of the lodges operated by the D∴G Cult. By doing so, cult leader Joachim Guenter hoped to pursue him into a collaboration.

After the Cult Incident was resolved, Hartmann lost his position as a politician and became a political refugee seeking asylum in Erebonia. His access was denied, however, and he sought shelter in the former Altair Lodge near Altair City. The madness of his partner-in-crime, Ernest Reis, scared him more than the prospect of getting arrested.

They found that during his stays in Paradise, Hartmann had been taking drugs that rendered him unable to judge normally. He insisted that he was the real victim, but the Crossbell Police Department could not overlook the visits to Paradise out of his own accord.

In the end, Hartmann surrendered to his crimes and was taken into custody in the Knox Prison. He ended up as a cowardly person who had lost both his social standing and the wealth he had built up. 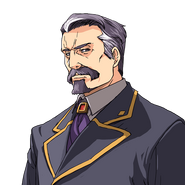