Male
v · e
Heinrich (ハインリッ) is the vice principal, instructor of political economics and homeroom instructor of Class I at Thors Military Academy.

Heinrich is a middle aged weaselly man with small brown eyes behind round spectacles, and combed-back brown hair into a ponytail. He wears an elaborate maroon suit with a short purple cape, white shirt and lavender cravat.

Heinrich has very high standards, insistent on maintaining the academy's high reputation and making sure that both students and staff adhere to the rules. He is incredibly passionate about the history and pride of the academy.

He has very high views of nobility due to their upbringing, while he looks at Class VII with disdain in part due to Instructor Sara's unprofessional conduct and the students' "dubious pedigree" as a result of the mixed class. He shows disbelief whenever Class VII surpasses Class I.

He is also a fan of Arc en Ciel; this is having seen Rixia Mao perform, having a photo of her in his notebook that he carries around with him. He considers her to be the "greatest artist of her time", and will take any chance to hope that his voice reaches hers.

Heinrich plays a minor role as the Vice-principal of Thors, mostly disparaging the efforts of commoner students. Behind his grumpy exterior however, he turns out to be a fervent fan of Rixia Mao and the Arc-En-Ciel and gets lost in passion when the subject is brought up. He fears for his reputation should his love become common knowledge, a sentiment he shares with regard to how he treats the commoner students.

He remains at the academy when Trista is occupied by the Noble Alliance. Upon its liberation, he remains as the Vice-principal. He is initially dismisses the complete Gambler Jack II collection as being mass market rubbish but resolves to give it a chance after thinking of his beloved Rixia. he is shown to care for the students when he wishes them all to return safely and not go missing on their operation, but haughtily as if to retain his image.

Heinrich is perturbed by the news of what had been happening in Crossbell, worrying for the state of his favourite star. 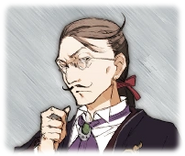