Helmut Albarea (ヘルムート・アルバレア) is the father of Rufus and Jusis Albarea. He was the lord of the House of Albarea (one of the Four Great Houses) and with it both Bareahard and the Kreuzen Province, before his positions were taken by Jusis following Helmut's arrest for his crimes perpetrated during the October War.

Helmut is a middle aged man with brown eyes and greying blonde hair which is kept short, parted in two directions and matches his thick moustache. Helmut dresses elaborately, with white, gold and blue waistcoats, a gold trimmed green jacket with matching tassels and bright white trousers. he wears a red sash around his torso, a sign of his status. Helmut also wears a thick purple scarf around his neck.

Helmut is a rather strict man both his family and the people around them. He is a supporter of the Noble Alliance and dislikes the idea of commoners attaining high positions in society. He also treats commoners as expendable and easy to manipulate, having no qualms in creating questionable policies on them. As such, he was also often at odds with Governor Carl Regnitz who supported Giliath Osborne's ideas of reforming the existing social classes.

Helmut also maintains high expectations for both of his sons; while it is clear that he loves both of them, he also expects them to maintain the family legacy. Even though Jusis is his biological son, he treats him significantly harsher than Rufus due to his commoner heritage. This, combined with his obsession, eventually disgusts both of his sons and put them on a different path.

Helmut Albarea was born into the Albarea House of the Four Great Noble Houses of Erebonia. As such, he was treated like a noble and was with raised with the high expectation of becoming the next lord. He eventually became the lord of Kreuzen.

At one point after becoming the lord, he married a noblewoman. In S.1177, he had his first son, Rufus.

Rufus was actually his nephew - his father was actually Helmut's younger brother, who had been banished for an unknown offense. Despite this, Rufus was still a pure-blooded noble, and Helmut needed to protect his reputation. He treated Rufus as if he was his true son.

Some time later, Helmut fell in love and engaged in a marital affair with a commoner woman. In S.1187, this woman bore Helmut's first biological son, Jusis. Jusis was raised by her until she died sometime after. After Jusis lost his mother, Helmut adopted him both out of love for his mother and maintaining his reputation. However, he treated him harshly due to his commoner heritage. Rufus noted the hypocrisy in Helmut raising Rufus as his own and his heir, while keeping his true son Jusis at arm's length over his heritage. This fostered the skepticism Rufus had towards Erebonian nobility, which would eventually lead to him secretly joining Osborne's Ironbloods. Rufus kept his allegiance to Osborne a secret from the rest of his family.

In S.1203/4, Helmut began attending secret meetings with Duke Cayenne who wanted to form a coalition of nobles known as the Noble Alliance. The organization was going against Osborne and his reformist policies in order to return the nation back into a true aristocratic system. Since Helmut agreed with Duke Cayenne's ideas, Helmut lent Cayenne the funds and military forces to enable him to begin his coup d'etat.

In the second chapter of Trails of Cold Steel, Helmet learns of Class VII's arrival to the province for a field study, which included Machias Regnitz (the son of Carl, Osborne's political right-hand man). During the field study, Helmut has Machias arrested with the intention of using him as a hostage against Carl. Helmut intentionally separated Jusis from the group before doing this to prevent him from interfering, but Jusis went behind his back and helped free his classmate anyway, to Helmut's chagrin.

During the October War in Trails of Cold Steel II, Helmut joined the other nobles in beating back all traces of resistance from the Reformist Faction. Intending to make a name for himself, he hired the Northern Jaegers to search Ymir for Alfin Reise Arnor without regard to the village's status. The jaegers did find Alfin, but Vita Clotilde intervened and dismissed the jaegers by using her magic to manipulate them into believing that the princess was not there.

When Jusis sent a letter to Helmut intending him of his decision to leave the Noble Alliance, Helmut became upset at this and sent a detachment of his provincial army to confront his son and his classmates. Helmut ended up saving Class VII, as they had been fighting off McBurn and Duvalie, the former having lost his fighting mood when the army arrived. After Rean defeated the Goliath unit, Jusis bade his father farewell, much to his disappointment.

The town of Celdic was eventually liberated by the 4th Armored Division when they managed to push Helmut's forces near the Twin Dragons Bridge. Enraged that the people of Celdic were openly welcoming the Imperial Army, Celdic had some of his soldiers and the Northern Jaegers make an example out of Celdic to put other towns in line. This led to the death of Celdic's market manager, Otto, and caused Helmut to be condemned by both sides of the war; Rufus gave Class VII guidance in sneaking into the duke's fortress to help them arrest him for his crimes.

After bypassing Duvalie (who was not there in the interest of defending Helmut), Jusis personally arrested Helmut and forced him to relinquish his position as Duke. Helmut was put under house arrest until a suitable punishment could be found. Despite being arrested by his own son, Helmut appointed Jusis as acting lord until he could return to rule. He also expressed his suspicion of Duke Cayenne, correctly believing that he had ulterior motives at hand with his mysterious associates. 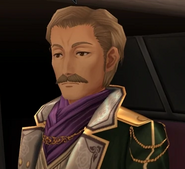