Hibelle is shown to be knowledgeable yet mature in behavior, as well as knowledgeable. He can assess the situation in both normal and serious cases. Quite honest yet sincere, Hibelle is proven to be dependable towards others as to not let them worry, especially his fellow freshman.

Being a second-year student at Thors Academy, Hibelle is the head of the wind orchestra. Hibelle tutors Mint on how to use the flute and is usually found helping set up instruments for others or arranging for the concerts they play, such as the one in the church. At some point, Hibelle explains that he used to tune the pianos and was mistaken for a ghost due to not being seen, forming on of the Seven Mysteries of Thors

He was injured in his arm which prevented him from taking part in the summer concert.

Despite being the studying-type, Hibelle can be very motivated in battle after Trista was invaded by the Noble Alliance, even Rean and Class VII were glad to know someone with such skills was lucky to help them out.

After escaping Thors Academy, Klein & Hibelle teamed up to travel the Empire assessing every update on the war, until they came across a hostage situation. Requiring assistance, they contacted the Courageous where Rean and Class VII came to their aid. The situation was about a hijacked airliner hidden around the Eisengard Range. The culprits where none other than the Bugbear jaeger-dropouts Class VII apprehended back in the Nord Highlands.

The two snuck in different directions with Class VII rescue the hostages while Klein and Hibelle liberates the main bridge. After restraining the mercenaries, the Thors students secured the safety of the remaining hostages before setting the airliner en-route to Roer Airport, where the culprits are handed over to the RMP and Nortia Provincial Army. Klein and Hibelle gave much of credit to Class VII for they played only support roles. With the mission done, Klein and Hibelle decide to regroup with everyone aboard the Courageous.

After graduation, Hibelle joined a military band to spread the power of music.

During the Great War, Hibelle is one of the unseen Thors Graduates that helps on board the Ark Royal. He thanks Klein for setting up a diversion in the intelligence network and is working with Makarov to finalise their strategy. He and Clara will be in charge of the maintenance and manoeuvring of the armored soldiers. 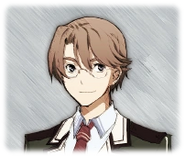 Add a photo to this gallery
Retrieved from "https://kiseki.fandom.com/wiki/Hibelle?oldid=65194"
Community content is available under CC-BY-SA unless otherwise noted.