Hugo is a young man with brown eyes and golden blonde hair. As a student of Thors, he wears the standard commoner uniform consisting of a green and white blazer, trousers, white shirt and red tie. Upon graduation, Hugo wears a smart navy suit over a black shirt, magenta tie and white waistcoat. he also now wears glasses.

Born and raised as the son of Kleist & Co.'s owner, Hugo grew up to become an aspiring businessman, being very devoted to help his family's company prosper. He endeavours to turn all situations to profit, carefully analysing a situation or circumstance to find out how best to turn it into an asset. He is friendly and generally amicable but can sometimes overlook the personal side of a business or the people running them in favor of the financial side. He maintains a friendly rivalry with Becky and the two strive to outcompete each other with their contrasting business philosophies.

Even after enrolling at Thors Military Academy, he continued to live at home in Heimdallr so he could help his father run his company. He commuted to the academy every day. At the academy, Hugo developed a mercantile competition with the similar minded Becky. He and Becky often get into a very heated rivalry, with Hugo preferring to maximise profit at any cost as opposed to Becky's more personal approach.

Charismatic and clever, Hugo does whatever it takes to maximise his income. Even during the Erebonian Civil War, he travelled through Erebonia to establish a commerce network to unite imperial businesses. Rather than hogging all the money, he decided to donate all income generated through the academy's flea market to the empire's post-war recovery.

After his graduation, Hugo started working full-time as the managing director of Kleist & Co., making cool-blooded, rational decisions wherever he goes. It is revealed he disbanded the cooperative set up during the war due to its perceived inefficiency which annoyed Becky.

Under Hugo's direction, the Kleist mall begins an strategy to push their influence in Ordis' retail market within six months, but upon investigation some of the illicit tactics used against Rivera Mart, New Class VII doubt his involvement. He is said to be travelling the country at this time. When Hugo arrives for his general inspection, he demands an explanation from Woods, the manager, calling him a third-rate sales manager. Thanking Class VII for helping him get 'rid of some trash' , Ferris Florald instead decides not to prosecute so that they can proceed as business rivals on fair terms. Hugo agrees then leaves on other business.

Hugo is later seen working, trying to make sure stores stay open even during martial law. He is working closely with the Imperial government. At the outbreak of the Great Twilight, Hugo is present in the capital when cryptids and Magic Knights begin to manifest.

Later on in the Great Twilight, Hugo continues working with the government despite it being obvious that the government is attempting to instigate war with Calvard. He encounters Class VII in Raquel, intending to apprehend them after a tip from a source he declines to name. He states he is after Ash, who is in disguise but after Vincent Florald intervenes stating that it would interfere with their deal, Hugo backs off stating he merely wanted to chat with old friends, leaving in an orbal car.

Hugo once again stops the ambitions of Wads when he plans to purchase precious metals and arts. Hugo states that the government is already content with an arrangement and that Woods is simply creating unnecessary labour and from the perspective of business ethics, potential and continuity, cancels the plan at once. He greets Rean again but states he has a habit of sticking his nose in where it doesn't belong, and says he will reimburse all of Parm's residents. When pressed on his connections to the government, Hugo warns Rean not to press it or proceed without proof, especially given his status as a fugitive.

When Woods resumes blackmailing civilians to turn profits and claiming he has government sponsorship, Hugo once again appears to get him to stop invoking the name of the business and claim falsehoods. Woods had been with the Kleist mall since its inception which is why Hugo had originally placed him in control of their Ordis operations. Hugo criticizes Woods for his unethical actions, stating that while he appreciates his devotion and efforts to the company, he cannot overlook his breach of conduct and suspends him indefinitely. He then apologizes to the group for the trouble he caused and offers to resign, but Becky and Class VII convince him to work with them, given his insider connections to the government, which he accepts.

Hugo is present at Mishelam Wonderland the night before the Great War, inspecting a branch of Kleist that had been opened there, alongside Becky. He is also part of the efforts to reach out to Alan who had been consumed buy the curse. He states he used the Kleist high speed cruiser to get there. It is said as part of his apologies for everything he had done, Hugo arranged for the Zauber Soldats to be cleansed.

Hugo partners with Becky on more business ventures, and the two have a stall at the Thors Branch Campus academy festival. Kleist states he is more open to business that is not based on purely rational decisions but that he still doesn't plan on making bad investments. He wants to rebuild the Kleist company.

Hugo is present in Crossbell as Reverse Babel appears, brining supplies along with Becky. He states they are from Kleist & Co's desire to expand their operations to Crossbell but Becky is dismissive of this claim. 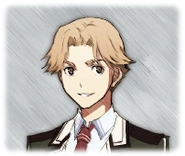