The Ironbloods (, literally "Children of Blood and Iron"), are an elite unit of operatives handpicked by Erebonian Chancellor Giliath Osborne himself. All of the Ironbloods revere Osborne (analogous to the reverence Anguis of Ouroboros have for their Grandmaster), and are some his most competent and devout followers.

The Ironbloods were first mentioned by Lechter, the first one to appear onscreen (and the only one to appear prior to Trails of Cold Steel) in Trails in the Sky the 3rd, Star Door 8: "Return to the Empire".

Rufus was the first member to join. On behalf of his father, Rufus hired the Arngarmr jaeger corps to attack Osborne, who was a rising figure in the commoner movement. Osborne survived the attack, leaving Vulcan as its only survivor, and not only traced the attack back to Rufus' father, but in fact deduced that it was Rufus himself who ordered the assault. Rufus did not particularly desire Osborne's death; it was simply a test of his competence, and Osborne deduced this. Impressed by his competence, and possessing a pre-existing disapproval for the nobility, Rufus agreed to become the first member of the Ironbloods in secret.

The next member to join was Claire Rieveldt. Osborne impressed her during a time of internal dispute within her family by noting her cognitive powers and encouraging her to bring her corrupt uncle to justice. She successfully did so, but this led to her uncle being executed and her being isolated from the family. Osborne inspired Claire to attend Thors Military Academy, and she later became the second Ironblood and also became a Captain of the Railway Military Police.

The third member to join was Lechter Arundel. Lechter's father was guilty of instigating a terrible event, and Osborne was ultimately the one responsible for bringing him to justice. However, Osborne was comforting to Lechter, granting him the letters his father wrote before his crimes, and invited him into his organization to give him the choice of what he would do with his life. He agreed, and joined as the third Ironblood. While technically having been the first youth recruited by Osborne Lechter only worked for the Intelligence Division at the time and did not formally join the group until his return from his foreign exchange study at Jenis Royal Academy in Liberl.

The fourth and final member to join was Millium Orion. In S.1199, the Black Workshop created her as a homunculus - an artificial human, though she could still develop her own emotions. Alongside her combat shell, Airgetlam, she worked for the Intelligence Division.

In the Gral of Erebos, the Ironbloods were deployed to stop Class VII from reaching the bottom, where it is revealed that Altina Orion, the final series of the Oz models, was meant to sublimate into the Sword of the End to kill the Nameless Holy Beast to bring about the Great Twilight. The group ultimately failed to stop Class VII, but Millium ended up sacrificing herself to save Altina, becoming the Sword in the process. Millium's soul was transferred into the Sword, meaning that she could no longer help the Ironbloods.

Knights of Blood and Iron

In their position to defend the Empyreal Fortress Tuatha De Danann, the group is collectively known as the Knights of Blood and Iron (鉄血の騎士) in Trails of Cold Steel IV, Finale: "Scattered Petals, Dying Flames". The group also includes a new member - Cedric Reise Arnor (who had been interested in joining the group in the previous game).

Rufus is arrested for conspiring with him to instigate the Great War; rather, he took the blame on Osborne's place, seeing that Lechter and Claire's positions meant that they would be needed to restore Erebonia. He is jailed and had most of his assets confiscated.

Rufus's surrender allows Lechter and Claire to continue leading their respective organizations in the aftermath of the war. Lechter in particular received much derision and scorn from his colleagues for his part in the war.

Millium's soul is successfully transferred into a backup body built by Franz, away from the prying eyes of Black Alberich.

Cedric disappears and joins Ouroboros as an Enforcer.

Ironbloods at the Gral of Erebos (Trails of Cold Steel III, Finale: "For Whom the Bell Tolls") 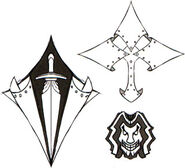 Concept art for the Knights of Blood and Iron