Ishmelga (イシュメルガ) was one of the seven Divine Knights of Erebonia, and the main antagonist of Trails of Cold Steel IV. It is described as a "thought entity birthed from malice." Ishmelga is revealed to have orchestrated every disaster that has ever befallen in Erebonia from the War of the Lions to the massacre in Hamel.

The seven Divine Knights were constructed to seal and serve as a receptacle of the Great One's power, the ultimate yet unstable power that was born from the fusion of the Sept-Terrions of Fire and Earth.[1] The Divine Knights were originally equipped with systems to think on its own,[1] and would be influenced by the actions of mankind.[2] Under influence of humanity's malice, however, Ishmelga involved into a unique spiritual lifeform.[Note 1][JP 3] In order to become a god-like entity with absolute power as much as possible, it spreads that malice throughout Erebonia in the form of a curse.[1]

Ishmelga succeeded in making one half of its creators, the Gnomes, its underlings which would continue to support it throughout history. In S.371, Ishmelga's dominance over the Gnomes was the likely cause of the Gnomes' declaration of separation from the Hexen Clan and their withdrawal to the background.[1] Using the Gnomes, Ishmelga continued to work on weaponry needed for the Great Twilight and areas required for the Rivalries. Ishmelga eventually dominated the soul of Franz Reinford, reawakening him as the Gnomes leader, Black Alberich.[1]

As a Divine Knight, Ishmelga was unable to use its full power without an Awakener.[1] Ishmelga's eye fell on the triumphs of Dreichels Reise Arnor during the War of the Lions and became obsessed with his soul. It tried to persuade the emperor to become its Awakener until he died of old age. Two hundred years later, it turned its attention to Dreichels' reincarnated soul in Giliath Osborne. Lianne Sandlot, who was cautious of the darkness, forced Ishmelga to wait for an opening to make its move.

Seeing an opportunity to claim Dreichels' reincarnated soul in S.1186 after Lianne temporarily took her gaze off Osborne, Ishmelga manipulated the spearheading officers of the Hamel Tragedy into launching a raid on Osborne's home, killing his wife and mortally wounding his son. In a desperate plea to save his son, Rean, Osborne agreed to become Ishmelga's Awakener.[1]

With the Gnomes as its loyal kinship and Osborne as its Awakener, Ishmelga's final aim was to accelerate the Great Twilight in order to become the Great One. By spreading the curse and initiating the Great Twilight, the conditions for the seven Divine Knights to engage in the Rivalries were met. It aimed to use the Rivalries to absorb the power of the other knights, restore itself to the Great One and gain world domination.[1]

Ishmelga's plan came in jeopardy during the final Rivalry, as it had taken advantage of the Great Twilight to start a massive world war and intended to use the conflict and strife to set the final Rivalry. Osborne dismissed Alberich's warning to wait later, claiming that there was enough conflict to begin. Osborne was eventually defeated by Rean and Valimar. At the final moment, Ishmelga abandoned the Black Divine Knights and targeted Rean, who as the true sacrifice had already been marked as a spare for Osborne. Ishmelga's thoughtform, now obsessed with the young Awakener, fused and took over Valimar. Both Rean's skin and Valimar's exterior became defiled by Ishmelga.[2]

In the true ending of Trails of Cold Steel IV, Argres's blessing as the Holy Beast of Earth dispels Ishmelga's binding spell on Black Alberich, returning him to Franz Reinford. With Franz's advice and the support of his friends, Rean manages to seal Ishmelga's thoughtform and the nearly completed Great One in the Earthen Prison.[JP 4] As the final Rivalry took place earlier than Ishmelga had planned, Ishmelga re-emerged as an incompletely manifested Great One known as Ishmelga-Loge; despite its immense power, the group noted that it was possible to defeat it before it grew even stronger. After struggling against Rean and his friends, the Great One was defeated at long last.[2]

Having lost the Great One's vessel, Ishmelga returned to its shadow-like existence of a thoughtform and teared its way into another dimension in an attempt to escape, with Rean pursuing it. In an attempt to have Rean spare it, Ishmelga insisted that humanity managed to grow thanks to its efforts to instill the general notion of strife. Rean acknowledges that humanity did indeed grow through Ishmelga's efforts, but also claims that while the opposing natures of mankind that brought forth Ishmelga, which in turn stimulates further strife, they still aim for for the possibility to reach new heights.[2] He even likens Ishmelga to a god-like entity that passed down blaze and wisdom to the people.[3]

Seeing that Rean had no intention to spare it, Ishmelga transformed into a sword and attempted to attack him, but Rean cleaved it in half in a single strike. Its death resulted in the curse dissipating for good.[2]

Ishmelga was somehow replicated through the Elysium singularity to show the result of what would have happened originally if Rean did not obtain Argres' blessing. After Rean flew into space with Valimar, Ishmelga constantly fought over Rean to obtain dominance over his body, but the two were put through a series of endless conflict before appearing in the current timeline as Ishmelga-Rean, a fusion of the two entities and the Awakener of the Great One.

During the raid on Reverse Babel, Rean cleaved his alternate self from the fusion, resulting in Ishmelga becoming berserk and corrupting the Great One. It fought against the raid party but was defeated. The fight allowed the other Rean to surface before they both dissipated.

Ishmelga was responsible for multiple events in Erebonia's history, including but not limited to: 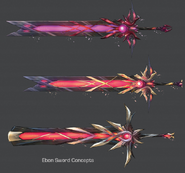