Jaegers (猟兵) are the elite among mercenaries in Zemuria and being acknowledged as one is a recognition of high skill and experience. They most often form groups known as a jaeger corps (猟兵団), of which many of exist, each with their own specialties, histories and sometimes rivalries. Many jaegers make use of specialized equipment and are among the most dangerous individuals on the continent.

Due to their willingness to take on morally grey contracts, jaegers are controversial and the legality of hiring them varies by country. Jaegers are rivals to the Bracer Guild whose humanitarianism and prioritization of civilian protection puts them at odds with jaegers. Thus some continents like Liberl outlaw jaegers within their borders and hiring them declared illegal.

Jaegers are known to fight with autonomous machinery resembling Archaisms and employ military monsters in battle. They are also commonly seen with S-rank weapons, characterised by their large size, multi-functional weaponry and destructive potential. The Black Workshop is known to have been one organisation that supplied jaeger corps with such weaponry around the continent.

All Western jaegers, and even former jaegers out of force of habit, respond with the German "Ja!" (ヤー) as their acknowledged/"wilco" word when given commands in the field. Jaegers from the East, like Khurga, use ウーラ instead. 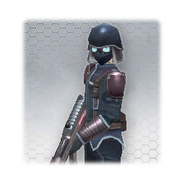