Kiseki Wiki
Register
Don't have an account?
Sign In
Advertisement
in: Characters, Bracer Guild, Trails in the Sky FC Characters,
and 2 more

Male
v · e
Jean  (ジャン)  is the main receptionist at the Ruan Branch of the Bracer Guild in Liberl, in Trails in the Sky FC, SC and the 3rd.

Jean is a bespectacled young man with hazel eyes and reddish-brown hair. He wears two baggy shirts on atop of each other: one khaki and one black turtle-neck, both long sleeved, with a blue waistcoat with a white trim on top. He wears dark green trousers, with a red sash around his waist and steel toe-capped boots in brown.

Jean is sensible and kind young man who has known Carna for a long time. He is kind and patient with everyone that he meets. Others describe Jean as a person who knows how to make others 'work to the bone'.

Jean is first seen after Estelle and Joshua arrive in Ruan, where he speaks with Kloe first and asks if she has another request for him. Jean initially assumes that Estelle and Joshua are civilians, but then notices the Bracer badges on their chests. Realizing who they are, Jean warmly greets Estelle and Joshua and introduces himself. He then tells them that he is expecting high things from them. After they fill in their forms, Jean informs them that the guild has been very busy because a member of the Royal Family is coming for an inspection. He also informs them about a unsavory group called the Ravens.

The next morning, as he is preparing their work, Jean is shocked to hear the Mercia Orphanage has burnt down. Jean asks the pair to investigate the incident.

After Clem is rescued from the Ravens, Estelle and co. return to the Bracer Guild and report their findings to Jean. Hearing Agate Crosner's name, Jean starts to explain Agate's past, but Agate himself walks in and stops him. After Agate takes over the case, Jean tells Estelle not to think badly on Agate. Kloe requests that Estelle and Joshua help out with her school's festival. Jean happily agrees to take her request since it will give Estelle and Joshua something to do.

Jean is next seen again after the events at Varenne Lighthouse. He listens on as Estelle and Joshua inform on everything that has happened and what they've discovered about Mayor Morris Dalmore. Jean expresses his disbelief that Mayor Dalmore is a villain. He then informs the two that the only way they can arrest him is if they catch him in the act. He then orders Estelle and Joshua to buy some time while he contacts and waits for the Royal Army by questioning the mayor. He the watches as Estelle and Joshua leave to confront the Mayor.

After the confrontation, Jean is seen receiving Estelle and Joshua's report. He admits his surprise at how quick the army was in arriving. When Estelle asks what will happen to Ruan, Jean informs her that the army will probably send someone in to serve as a temporary mayor until they vote a new one in. He also informs them that the rebuilding of the Orphanage has already begun.

When Estelle and Joshua ask about Agate, Jean informs them that Agate had managed to track them down, but they got away. He then informs the pair that Agate has picked up their trail again and is following them to Zeiss. Taking the opportunity, Jean explains a bit of Agate's past and that it was their father Cassius Bright who set Agate on the trail to becoming a Bracer.

After hearing mention about the Black Orbment, Jean asks Estelle and co. about it. Hearing about the note, Jean suggests that the pair go to Zeiss if they want answers about it. He then gives Estelle and Joshua their recommendations from the Ruan branch and permits them to go to Zeiss. He then congratulates the two and is next seen saying goodbye to them the next day.

Jean is first seen welcoming Estelle and Agate (or Scherazard) back to Ruan. He tells them how glad he is to see them, as work has piled up since Carna left. He then asks if they are ready to go, and Estelle laughs. Agate states that they were expecting a little board work, and then asks if anything critical has shown up. Jean replies that there is nothing crucial yet, since everyone is busy with the Mayoral Election and tourists are avoiding Ruan for the moment until its settled.

Estelle is shocked by Jean's statement and asks who is running. Jean replies that one is Mr. Norman of the tourism industry and the other is Mr. Portos who is for the revival of the harbor and shipping business. He then reminds Estelle that whoever becomes the mayor of Ruan is also the mayor for the entire region as well. Jean then starts gushing about the event and Estelle agrees, but laments that she can't vote in it. However, she does get excited because she was the one who caused this election to happen.

Jean suggests that she read the Liberl News then. Suddenly, Jean gets reminded of a job that they can investigate and tells them about the ghost sightings that have occurred around the province of Ruan for the past two weeks. Agate suggests that it might be real considering multiple people have seen it around the province and Jean reluctantly agrees. Jean then asks if Estelle and Agate could investigate it when they are free enough.

Estelle starts getting nervous and tries to get out of it, but Jean and Agate pick up the fact that she's afraid of ghosts. Estelle tries to deny it, but fails. Jean suggests that she doesn't have to do it, but Agate interrupts and declares that they'll do it. He then justifies his decision to Estelle by saying that the 'white shadow' might be linked to the society. He then says that it's alright for her to be scared, but she should face it not run from it.

Hearing this, Jean timidly suggests that Agate might be acting a little bit harsh on Estelle, but Estelle agrees with Agate. Estelle then tells Jean that they'll be investigating the ghost sightings. Glad by Estelle's response, Jean tells the pair about 3 possible ghost sighting locations and lets them get to work.

When former Raven Gang members Rais, Rocco and Deen enlist as bracers at the Ruan branch in hopes of working with Carna, Jean has other ideas and assigns them to be trained by their former leader Agate. 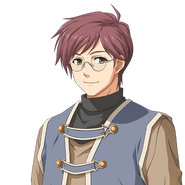 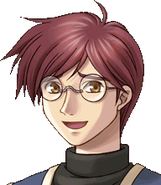 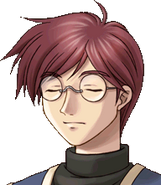 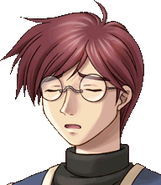 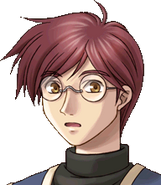 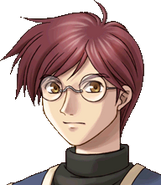 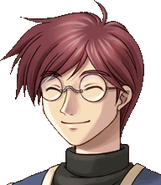 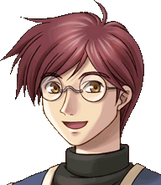