v · e
Judith Ranster (ジュディス・ランスター) is an actress introduced in Kuro no Kiseki.

Judith is a young woman with long pinkish blonde hair tied into a ponytail and turquoise eyes. There are gold accents at the tips of her ponytail and fringe. Judith wears a cream pinstripe coat with detached loose sleeves and a belt around her waist. She also wears a black midriff-baring top with a lace band, red shorts and black thigh high stockings with suspenders. A pair of sunglasses is hanging from her top. Judith wears turquoise high-heeled shoes and carries a barbed whip named Stellabute.

Judith is friendly but also highly professional when it comes to her work as an actress. She also has a strong will and sense of justice to stand up for the weak, no matter who she has to face up to and will not back down form a challenging foe. Judith often haphazardly reveals information about herself which can let others gain an advantage, and her refusal to admit obvious truths and ironic terribly lying ability often lead to situations where she isn't fooling anyone. Judith strives to maintain the legacy of her family.

As one of the top actresses of the orbal cinema industry, Judith has captured the hearts of many fans across Calvard with her appearance and talent. Although she appears as an actress to the media, working with the Lexcel Talent Agency, she also has a secret side job that she conducts in between her acting.

Grimcats, the Phantom Thief is a role she has inherited from her mother and grandmother before her, with each successive generation taking up the mantle. Judith is the third to wear the mask and don the title. During her time in the role, Judith encountered Rixia Mao who was active as Yin at the time and the pair developed a friendly rivalry.

Judith stars as the leading actress in the film Golden Blood, an action thriller directed by Salvatore Gotch. A R-17 version exists with raunchier scenes and the film is popular enough that Judith hopes to win the Best Actress award at the Tharbad Film Festival. Judith has worked with Gotch and VegasFilm‏‎ before, with the former taking advantage of Judith's sex appeal and athleticism as part of his driving tastes.

Judith is actively promoting the recent release of her latest feature film, Golden Blood, a film that is extremely popular, at the start of the game's events. She makes appearances at film theatres across the republic, including in Edith where Van first meets her. Judith is renting an apartment in the city and is simultaneously balancing her actress work with that of her uncover work as Grimcats. News of Grimcats is circulating in the Tyrell News and Van and the party encounter her in the subways, leading to a confrontation. After seeing Judith in the cinema, Van immediately makes a connection, but any doubts he had are removed completely after speaking her to her as it is obvious she can't hide the truth.

Judith is very worried for the safety of herself and fellow actress Nina Fenly in the events surrounding the Tharbad Film Festival. Nina is her junior as an actress and an up and coming rival. Both women received threatening letters to not take part, a credible threat considering the Messeldam Film Festival had been cancelled only very recently due to terrorism. Van accepts Nina's request to investigate, with Judith also pledging her support once the party arrive in Tharbad. Judith (as Grimcats) intercepts Van and Aaron Wei on a Night out for information, thinking they had adverse intentions towards Sarah.

Judith ultimately loses out on Best Actress to Nina but takes it in good grace and vows that she will have to up her game to match Nina's career. They move to the Al Jumeriah hotel when a large portion of festival goers become violent and under the control of the Genesis and Almata's drugs. Judith moves to protect the other actors and directors by donning the Grimcats persona, but she is pinned down by hotel security. Van and his party come to her and she teams up with them to expel Gerard Dantes and Melchior from the tower. She then rushes off and returns as Judith before the other civilians figure the truth out, however obvious.

Judith is later caught talking with Maxim Rogan in a car park by paparazzi photographers from Buzz Radar. A manufactured scandal is brewed up by the press thinking she is having a fling with him, and Judith is forced to lay low. She leaves the city and heads to Longlai where she hopes for some peace and to train. Van and the party meet her again here after they go looking for a missing person which turns out to be Judith herself. She had been undergoing waterfall training. A Nue Cryptid appears and Judith transforms into Grimcats to help the party fight it off. After the battle, she still refuses to admit her secret identity until her costume runs out of energy and she accidentally exposes her body to Van. After a tumultuous sequence of events, both parties agree to maintain confidentiality and Judith joins them for dinner after Yumé requests it.

Judith joins the party to search for the missing Yumé the next morning. They head into the mountains where they confront Mare who had taken over her body. Shizuna Rem Misurugi and the Ikaruga apprehend Mare/Yumé, but Shizuna also wants to fight. After an initial round, Shizuna prepares to go all out and Judith screams at everyone to stop, citing their childish behaviour and the ridiculousness of the situation. Arioch of Garden, acting on behalf of Almata then appears. Judith is shocked to hear of Arioch's age and unfamiliarity with modern entertainment, suggesting he see one of her films. After the encounter and the following return to Edith, Judith, unable to return to her apartment whilst the paparazzi are swarming her for more gossip, rents out an apartment above the Monmarte Bistro and take sup work with Van until the press dies down.

Judith joins the party in Oración but is shocked at the massive difference in culture. Favouring traditional mediums such as stage theatres and opera, many in the city have disapproving thoughts regarding orbal cinema and have even worse opinions of Judith as an actress seeing her as someone that just sells her body for attention. Judith once again has the chance to face Arioch, who admits that he went to see one of her films whilst in the city. Having been defeated, Judith never gets the chance to find out what he thought about it before he fades away, but recognizes the move Judith used on him as one from Golden Blood.

Judith is present in Edith when Pandemonium takes hold. She is one of the last party members to be reunited with van, having been captured and bound along with Maxim. Prince Sherid Asverl uses his jewel arts to help break the seal of the building so she can be rescued. She then joins the efforts to reach Genesis Tower. Within the tower, Judith finds out that a resurrected Arioch really did enjoy her films before he is defeated once again and fades for good. Judith is one of the few able to travel to the Endless Boundary where they retrieve Van.

Judith continues to rent a room at the bistro and therefore intends to stop by now and then to Van's chagrin. However, Judith starts work on a new film in the New Year and will be busy for a while. Over the holidays, Judith visits her mother and grandmother. 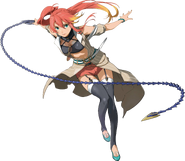 Young Judith with mother and grandmother