Juna is a young woman with pink pink hair and green eyes, bearing a strong familial resemblance to her mother and siblings in the Crawford Family. As a student of the branch campus, Juna wears the standard uniform of a blue blazer, waistcoat and skirt, with an accompanying white skit and red ribbon tie. She also wears knee high laced boots and red socks, with an ammunition pouch strapped around her thigh.

Juna is a straightforward, energetic girl and hard worker. She takes immense pride in her heritage and state, being a staunch and vocal supporter for Crossbell's independence. She eagerly takes on anything related to Crossbell and despises people who meddle in its affairs. She tends to get easily worked up about Erebonia's invasion and occupation of her homeland of Crossbell. Juna admires the Special Support Section, especially Lloyd Bannings, for the work that they do despite the immense challenges they face.

Despite her appearance, Juna admits that she appreciates being praised for her work and can be easily offended by people mocking her, intentional or not. She has also proven to be a capable leader when Rean is not around.

Juna was born and raised in Crossbell. She is the daughter of Matthew Crawford and Lina Crawford who work at the Planning and Sales Department of Hotel Delphinia in Mishelam. Her father often has to work late. Juna has two younger siblings, the twins Ken and Nana. They live in the Bellheim Apartments in Crossbell City's West Street.

Inspired by the Special Support Section's endeavors, Juna aspired to become a police agent with the Crossbell Police Department. Her dream, however, falls to pieces thanks to the Imperial occupation of Crossbell.

During Erebonia's invasion of Crossbell. Its other suzerain, Calvard, responded with a large-scale invasion of its Armored Aviation divisions. During the evacuation from Crossbell City to Armorica Village, the van Juna and her siblings were on encountered a Republican gunship that was free-falling after it attacked the van. Feeling powerless in front of the airship, Juna decided to shield her siblings from the inevitable crash when Rean, who was piloting Valimar, appeared and saved them.

Since her dream is no longer attainable, Juna decides to enroll at the Thors Branch Campus school following the recommendation of a certain someone. She decides to use this chance to investigate the country that invaded her home in S.1205.

During the first day at Thors Branch Campus, Juna finds out that she has been assigned to Class VII. Her instructor is Rean Schwarzer, who was involved in the occupation of Crossbell. One of her fellow classmates is Kurt Vander, son of the prestigious Erebonian military family. Initially, Juna finds herself trapped in a mindset of prejudice over all Erebonians. Over time, however, she reflects that she was wrong to tar all imperial citizens with the same brush.

Although she warmed up to Kurt rather quickly, she kept her instructor at a distance. Ultimately, she confesses that she has been trying to thank Rean for his actions during Erebonia's invasion of Crossbell.

Class VII's second field study takes them to Crossbell. Juna shows them around, emphasizing her pride as a Crossbellan. Her pride attitude is shortlived, however, when she finds out through a conversation between Prince Olivert Reise Arnor and Governor General Rufus Albarea that her heroes, members, and affiliates of the Special Support Section, have been locked away at Mishelam. She loudly begs her instructor to return her city, the one where everyone can freely dream, before breaking down into a depression.

As Rean goes out to carry out orders from the imperial government, Juna's classmates and other students from the Branch Campus lift up her spirits. She arrives at the realization that, starting with Rean, there are plenty of Erebonians that share the spirit of the Special Support Section. She decides that she wants to work toward a future where both Crossbell and Erebonia are happy.

Before leaving Crossbell to head back to the academy, she learns that Lloyd Bannings and the others have been let go.

Juna continues to support New Class VII throughout their following field studies in Lamarre and the capital, and joins the operation to hunt down Calvardian agents in the capital and the subsequent plan to defeat the reborn Zoro-Agruga. Juna joins Rean all the way down the Gral of Erebos to the final tier.

Two weeks following the Gral of Erebos events, Juna wakes up and finds herself in Eryn Village alongside Kurt and Altina, following Musse's departure to begin Mille Mirage. Walking around the village with her classmates, Juna learns that Osborne is Rean's actual father. Angered by this revelation, she gathers Original Class VII and convinces both them and her classmates to get Rean back, taking the role of temporary leader and the 'heart of Class VII'. Through their efforts, they eventually reunite with Ash, Musse and face Rufus Albarea in the Lake Elm Wetlands. They are able to locate the Black Workshop where they get through to a berserk Rean and he is successfully rescued.

Juna then accompanies Rean in their efforts around the empire, first retrieving comrades at various sites such as the mansion in Ordis, Dreknor Fortress and Einhel Keep at the Branch campus. They then attend the conference to discuss Operation Mille Mirage onboard the Pantagruel. Juna continues to lend her support to Rean afterwards, locating the shrines and special grounds for the Rivalries and overcoming the barriers that have been placed upon them.

Juna is present in the final operation to storm the Tuatha De Danann for the final rivalries and takes part in the battle. She questions Mariabell and Campanella when they try to escape about the nature of Ouroboros.

She later attends the Imperial wedding of Olivert Reise Arnor and Scherazard Harvey.

Juna is present at several events take that place before the main story, including the Branch Campus Academy Festival, the tasting of food for the Imperial wedding, aiding Tita Russell with the Orbal gear and the Erebonian Martial Arts Tournament. She also is involved in solving a mysterious case at St. Astraia Girls' School, going undercover and eventually foiling a devil's plot.

Juna temporarily travels to Crossbell to help with the ousting of the Imperial Defence Force, helping the SSS reach the upper levels of the Orchis Tower by crashing a stolen Zauber Soldat through the window. She escorts civilians down and out of the battle.

In her first main story appearance, Juna accompanies Rean with the rest of new Class VII to Ymir where Claire had invited them. There they are tested by Matteus Vander and Claire to see if they are strong enough for the important mission of finding the missing Prince. They successfully prove themselves after Altina works with Juna to get past Claire.

Juna joins Rean in Mishelam where they hunt for the Sonorous Seashell. The group encounters Mishinator, and locate the pieces of the 'Treasure of M' that grant them access to the Castle of Mirrors. Juna tries to get through to Mishinator about the true feelings of Mishy, and in the end he self detonates. Inside, Juna encounters a Simulacrum of herself and Ishmelga-Rean on the top floor.

Juna is present for the final battle against Elysium at Reverse Babel. 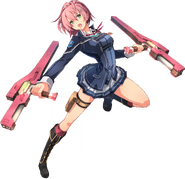 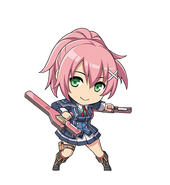 Yuna with the Special Support Section (not shown in-game). 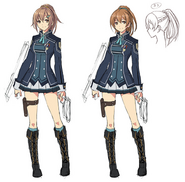 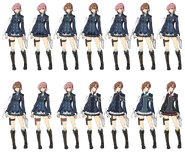 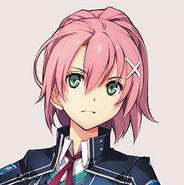 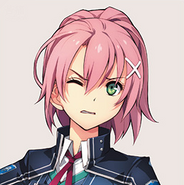 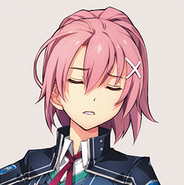 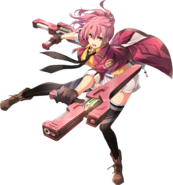 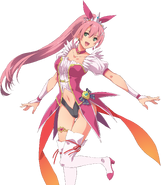 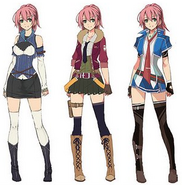 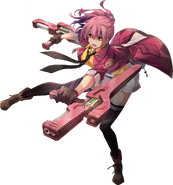 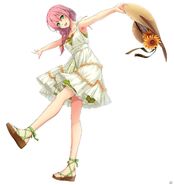 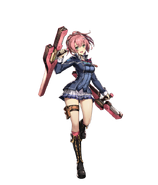 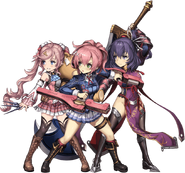