Knight Sword
v · e
Jusis Albarea (ユーシス・アルバレア) is introduced as the son of Duke Albarea, one of the Four Great Houses, and a member of Thors Military Academy's Class VII.

Jusis is a young man with icy blue eyes and blonde hair. As a student of Thors, Jusis wore the the crimson Class VII uniform. He preferred wearing it very casually, having the jacket completely unbuttoned with a sweater vest underneath, and paired with flannel pants and dress shoes.

During the October War, Jusis went for a formal white shirt with a black neck-scarf, navy blue waistcoat, black trousers, knee high leather boots and a long green coat. He wears two belts in opposite diagonal angles, one of burgundy and one of gold. He also wears black riding gloves.

In combat, he brandishes a one-handed sword and assumes a fencing style combat stance. Later, Jusis uses one of the holy swords of House Albarea, Ishnard, a silver dual edged blade with several spiky protrusions.

Jusis comes off as a composed and serious noble. He has a haughtiness that seems typical of nobles, but is mostly to keep up appearances rather than for ill-will. Jusis shows a strong belief in the proper role of nobility, and despises nobles who attempt to callously curry favour with him. He believes that nobles have a responsibility to do right by their people, and he takes it upon himself to do everything he can to act like a proper noble. He is sometimes unsure about what is right for a noble, but shows disdain at his father's harsh policies.

Much to his classmates' surprise, Jusis gets along well with children. He gives advice to two children from Bareahard, looking out for them as an older brother figure, and they show great excitement in return. This also extends to the overly-hyperactive Millium despite her affection towards him. While exasperated by Millium's childish behaviour towardsh im, he nonetheless sees her as a younger sister figure.

Jusis was born in S.1187 to his father, Duke Helmut Albarea, and a commoner woman whom the Duke had an affair with. After his mother died, Helmut adopted Jusis out of respect for her and to minimize the likelihood of a scandal. Jusis got along well with his cousin Rufus Albarea and had a brother relationship with him - he was not aware that Rufus was his cousin at the time, as Rufus was the son of Helmut's wife and his banished brother. Jusis trusted Rufus and was instructed in court fencing by him.

Jusis enrolled in Thors Military Academy in order to escape his suffocating family life. His first encounter with Machias Regnitz ended horrifically and managed to ruin his normally composed attitude. The fact that he sneers at the ridiculous nature of commoners obsessed with their hatred for nobility seems to add fuel to the fire.

Over the course of his first year at Thors, he frequently irritates commoners such as Machias and Paula, who genuinely believe that he thinks he is better than them. However, this disrespectful behavior is not due to any belief that his position as a high-ranking noble makes him superior to others.

After the field study at Celdic, Jusis apologizes to his classmates for the trouble his father caused them after it was revealed the provincial army was supporting bandits in vandalizing the city's market stalls.

During the field study at Bareahard, Jusis ends up in a squabble with Machias over their combat link after defeating a monster, which had enough strength to attack and injure Rean. Jusis knew that the situation was Machias' fault and not his, and silently waited for his response. The following night, Jusis explained to Rean that he had unusual life circumstances which Rean shared, causing the two to build a supportive relationship with each other. Machias, overhearing that Jusis was not a full noble, apologized to him in the morning, which he accepted. Helmut later had Jusis taken away while he had his men arrest Machias to blackmail his father, Carl. Jusis, having newfound respect for Machias after he admitted his mistakes, chose to help his classmates and free him.

When Millium enrolled in the class in 18 August S.1204, her overly affectionate attitude towards him left him completely exasperated.

At the start of the civil war, Jusis initially fights alongside his classmates, but after the group temporarily separates ways, he returns to Bareahard, working for the Noble Alliance due to his father and brother working with them. Upon hearing of his classmates' arrival in the area, he discreetly leads them to the airport and tries to persuade them to leave him, to no avail. Rean eventually manages to convince him to join after besting him in a duel, leading him to realize that he cannot accept his family's wrongdoings.

After hearing that his father had the town of Celdic razed for refusing to follow him, Jusis, along with his classmates, confronts his father. After several brief skirmishes on the way, he personally arrests him for his crimes against the people. As Rufus was still working with the Noble Alliance, Jusis served as an interim lord and ordered the region's provincial army to stand down.

Jusis ends up holding the position permanently after learning that Rufus was actually a member of the Ironbloods and was made governor-general of Crossbell Province. He is planning to reshape the Bareahard region. Behind closed doors, he has been staying in touch with the other Great Houses as they increase their pressure. He tasked the family butler Arnauld with overseeing the province as much as he could on his behalf.

During the Gral of Erebos incident, Jusis confronted Rufus and learned from him that they were actually cousins. He also learned of Millium's apparent death, which greatly saddened him. He was somehow able to obtain her hat before he was teleported to Eryn village. After New Class VII woke up, Jusis attempted to offer her hat to Altina, but she refused to accept it, so he kept it with him. While working with his former classmates and the new Class VII, Millium revealed that she was still alive in the sword, which comforted him.

During one of Rean's bonding events with him, Jusis returns to Bareahard to deal with accumulated documents that Aranauld had been unable to process. He also retrieved the Holy Sword of Elvars (聖剣エルヴァース), knowing that a confrontation with Rufus would be inevitable.

Before the World War started, Jusis spent some time with Millium at Mishelam Wonderland. Jusis later fought alongside Rean and Crow against Rufus and watched as his cousin lost the Rivalry against Rean and Valimar. Although he forgave Rufus, he condemned his earlier actions and knocked him out with a single blow.

When Millium's soul was transferred from the Sword of the End to a spare backup body, Jusis immediately hugged her alongside Altina, happy to have her back. He later attended Olivert and Scherazard's wedding.

In the aftermath of the World War, Jusis learned that Rufus had broken out of prison and forcefully seized Crossbell to begin a "Crossbell Unifed Nation", much to his surprise and disgust.

He went to Heimdallr with Millium in order to investigate mysterious companies that were buying bulk goods for no apparent reason. He met with Rean, learning from him that he had arrived to the city after a masked person was going to target the "sludge" underneath the city. The group then encountered the masked person's party and gave chase underneath the catacombs. During the pursuit, they discovered the bulk goods that Jusis had been trying to locate, along with rebels that attempted to instigate a new war. He was shocked to see that the masked person was actually his cousin and tried to question him to no avail.

Eventually he learned that the Rufus in Crossbell City was a fake and assisted his cousin in removing the imposter. When Rufus stepped aside to destroy Reverse Babel at the cost of his own life, Jusis accompanied Lloyd and Rufus' group to rescue his cousin. He was worried that Rufus would die from his injuries, but Rufus made a full recovery. Jusis was relieved to see his cousin well, albeit upset at how he worried him greatly. 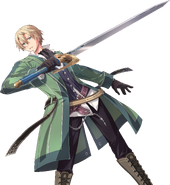 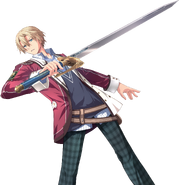 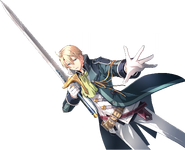 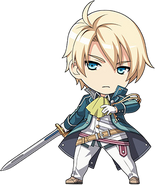 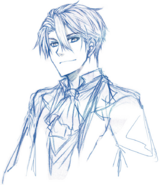 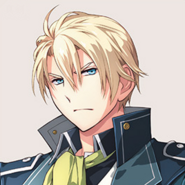 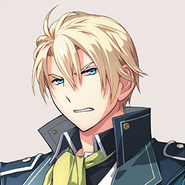 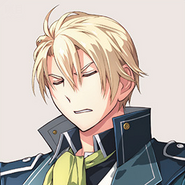 Promotional Screenshot of Jusis with Rean Schwarzer and Ash Carbide.