Kiseki Wiki
Register
Don't have an account?
Sign In
Advertisement
in: Characters, Deceased Characters, Trails in the Sky SC Characters,
and 2 more

Karin was a young woman with long black hair and amber eyes, sharing a strong familial resemblance to her brother, Joshua. Karin had two ties in her hair. She wore a long-sleeved white shirt with a ruffled collar and button line, a black skirt with a red pinafore apron and a brown shawl tied around her shoulders.

Karin was a gentle and caring figure for both Joshua and Leonhardt. She would always remain by their sides and support their dreams of becoming bracers, also vowing to protect her beloved younger brother as well as her lover. Karin had already dreamed of living her life out fully by loving Leonhardt and watching her brother grow up.

On the night of April 23, S.1192, Hamel was attacked by jaeger dropouts. The village was instantly in flames and residents were cut down one by one. Leonhardt told Karin to take Joshua and escape the village, promising to meet up with the siblings later after he helped fend off the attackers. Karin fled the fire-infested village, taking Joshua by the hand with Joshua's dog with them.

Their freedom was short-lived, however, as a jaeger tracked them. The jaeger tried attacking Karin, but Joshua protected her. During the struggle, Karin was stabbed multiple times and eventually collapsed, still holding Joshua in her arms. Joshua was both enraged and scared, and decided to shoot the jaeger with his own gun, ending the fight between the Astray siblings and the dropout.

Leonhardt arrived at the scene when Karin had only a little time left in the world, holding her close and begging her to not die. Karin smiled sweetly like she always did and handed her harmonica to Joshua, telling him to grow up strong. She then directed her attention to Loewe asking him to watch over Joshua. With her last breath, Karin thanked and told the two that she loved them.

The two buried Karin near a cliff overlooking the remains of Hamel Village. Her death caused a profound impact on both of them, as they joined Ouroboros and changed the heartwarming, passionate boys dreams as Georg Weissmann told the duo, "I can mend your broken heart."

Her death also made Joshua unable to cry at all, but this was changed ten years after her death after Estelle proclaimed her love for him.

Joshua was later able to accept Karin's death thanks to the help of his friends, using her sacrifice as strength to defeat Leonhardt in a one-on-one challenge on top of the Axis Pillar. Following the conclusion of the Orbal Shutdown Phenomenon, which resulted in Leonhardt's death, Joshua took his sword, the Kernviter, and brought it to Karin's grave as a memento. Estelle left behind flowers and introduced herself to Karin. Joshua stated that Karin would have liked Estelle, seeing the two as contrasts to each other. 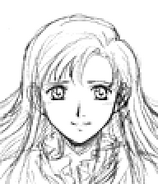