Male
v · e
Kenneth Lakelord (ケネス・レイクロード) is a professional angler, the second son of Lakelord II of the Lakelord Company and a student of Thors Military Academy's Class II.

Kenneth is a young man with green eyes and messy pink hair. He can always be seen wearing his flat cap and sporting some kind of fishing gear.

During his time at Thors, he wore the uniform for noble students, a white and purple blazer with a purple tie. After graduation, he wears a yellow buttoned shirt beneath a thick green waistcoat, khaki trousers and black wellington boots.

Unlike his brother, Lakelord III, Kenneth enjoys a relaxed attitude and loves to sit down and fish whenever he has the chance. He is a patient and enthusiastic individual who does not display the arrogance and self-conceitedness which is common is so many other members of the nobility. He is passionate about his hobby and shares it with whomever he meets.

Kenneth was born as the second son of Baron Lakelord II.

After enrolling at Thors Military Academy, he became the head of the Imperial Fishing Club. The fishing club was established by his brother, a former Thors student.

Kenneth's laid-back attitude makes it easy for him to befriend people, in particular with fellow fishing aficionados like Rean Schwarzer. He is also close to Annabelle, who was once betrothed to his brother. After Lakelord III admitted that marrying the daughter of a viscount weighed heavy on his shoulders. Secretly, Annabelle also wished to call of the marriage. Kenneth proposed they should settle the matter in first a fishing duel by their respective vice-captains, meaning Narses on behalf of Lakelord III and Rean on behalf of Kenneth, followed by a duel between both captains. Rean gives Kenneth a headstart by catching the giant swordtail.

During the battle, Annabelle realizes that Kenneth has been thinking about her's well-being and happiness all along. After Kenneth wins the fishing duel, Lakelord III apologizes for betraying Annabelle's trust and calls off their engagement.

After the marriage with his brother was cancelled, Kenneth and Annebelle continue to enjoy their time fishing together.

Kenneth and Annabelle continue their fishing journey across the country together. Kenneth is first encountered in Crossbell where he is staying at the fisherman's hack in the swamplands of Crossbell and he meets new Class VII. He gives Class VII the key to the marsh under Lughman's direction. He catches a huge fish for Celine whilst the others are talking.

Kenneth is present at the fishing competition between the Imperial Fishing club and the Fishermen's Guild outside of Heimdallr.

Kenneth goes missing following the start of the Great Twilight, and is one of a few individuals selected to help in secret onboard the Courageous II. After his return, he travels the country looking for fishing spots while relaying any information he finds back to the Courageous.

On the final night before the Great War, Kenneth and Annabelle are fishing together. Kenneth states he has to act as a graduate of Thors first and foremost to protect a world where they can fish together. It seems like Annabelle is able to make a declaration of love but she flusters at the last moment and diverts to fishing. It is implied Kenneth is aware of her feelings though. Kenneth is amongst the Thors Alumni brought to help resolve Alan's feelings.

Kenneth and Annabelle collaborate on a entry for the Prince's wedding reception. They cook grilled salmon salmora, a dish Wilhelm Ballad can immediately taste the quality of the dish and knows that the fish was one of the legendary Salmora children who take a special migration path. Ballard calls the other judges amateurs for not being able to discern this, after seeing their reactions to the ratio of fat. Annabelle states that the pair of them took extra special care with the seasoning and heat. When the validity of being bale to serve such rare fish is brought up, Kenneth states they have the full backing of the Imperial fishing Club and the Fisherman's Guild and finding any fish is not a problem. 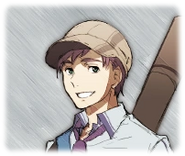