Klein is a tall young man with dark hair and brown eyes. He wears the standard uniform for Thors commoner students, consisting of a green and white blazer, brown trousers, a white shirt and a red tie. As the captain of the swimming club, Klein is also often seen in his black and red swimming trunks.

Klein has a mature presence. He’s also quite humble and often carrying a smile. He seems to be a man of action when the time comes to act, especially when it comes to knowing what to do on a battlefield.

He is devoted to his mother, who raised him and his siblings following his father's death. He works hard to make her proud and pay her back.

Klein is from the countryside, only entering Thors because he got a scholarship. He works hard for the sake of his mother who raised him when their father died, showing her around the campus at the festival with enthusiasm. When he heard the news she had collapsed, he rushed home to see her immediately.

Klein is the captain of the Thors Military Academy Swimming Club. he is often seen encouraging all of its members to excel and do their best. He is skilled both when it comes to athletics and academic studies. He requests Rean's help with tutoring a small child, Emile. Klein is also responsible for assigning Monica to Laura and later remarks that it was the right decision.

During the October War, after escaping Thor’s Academy with the other students, Klein & Heibel had been doing their best to stay up to date on how the war’s going. Before long, they contacted Rean and Class VII about an airliner that was hijacked by jaegars around the Eisengard Range. They used civilian hostages, nobles included. Klein and Heibel swapped info before Klein acquired an orbal rifle. While the two snuck in through one way, Class VII went in another way to rescue the hostages. During the confrontation, Klein and Heibel took care of the foes on the bridge to gain control of the airliner; Klein took out the lookouts while the Jaegers were busy fighting Class VII.

After properly restraining the mercenaries, the Thors Students secured the safety of the remaining hostages before setting the airliner in route to Roer Airport, where the heroes handed the culprits to the RMP and Nortia Provincial Army. Klein and Heibel gave much credit to Class VII for they played only support roles. With the mission done, Klein and Heibel decided to join Class VII aboard the Courageous then continuing to fly solo, and would help Rean’s party out in the future. Klein took up the post of navigation officer on board the courageous, and he and Caspar are determined to make their families proud

After graduation, he made plans to enlist in the army.

Klein graduated last-minute and joined the Imperial Army of Erebonia's Intelligence Division.[1] Klein states he is working with Beatrix during the Great War and is helping onboard the Ark Royal. He contacts Rean and Munk in a communications test.

Klein makes a small vocal appearance as a subordinate of Lechter in the Intelligence division, working to uncover agents of an unknown allegiance in Crossbell, who had apparently started in September. Lechter tells him not to let the target get away, and hangs up on him. 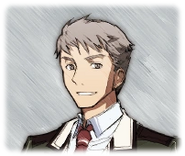