Large Shuriken
v · e
Kurogane (クロガネ) is a member of the Ikaruga jaeger group from the East, first appearing in Calvard in Kuro no Kiseki.

He is a massive, muscular man who covers his face with a mask and helmet that completely hide his facial appearance, leaving only two beady eyes. He seems to wear dark plate armor with baggy materials including two long violet scarves trailing behind him. He carries a long double-bladed Chakram with long protrusions on each cardinal direction. This weapon is capable of being split into two equal halves and thrown.

Kurogane is a stoic individual who is fiercely loyal to the captain of the Ikaruga, Shizuna Rem Misurugi. He has the Ikaruga's best interests at heart and will move to actively challenge anyone who might hinder their ambitions. Kurogane is not above making jokes, but his typical serious nature often means they are unexpected and people take him at his first word. He also has interest in Gotch movies.

Kurogane is a chunin of the Ikaruga samurai. While Ikaruga has many skilled masters of katanas and stealth, Kurogane’s superhuman body, martial arts, and polished Hazy Moon-style hidden weapon techniques make him as strong as the Enforcers of Ouroboros.[1] He is a practitioner of the Hazy Moon school. He wields two double-edged sabers in battle. The weapons are relics from the Dark Ages that require immense skill to use. Although his sabers are slightly shorter than the one Crow uses, Kurogane implemented a mechanism that allowed him to attach the two together to create a deadly, cross-bladed throwing sword. Kurogane is a servant to Shizuna Rem Misurugi, whom he calls 'Hime'.

When Rean Schwarzer arrived in mountains near Longlai, Calvard to search for his mater Yun Ka-fai, he crossed paths with four Ikaruga members, including two scouts, Kurogane and Hime. They stated that their "contract" were to have them observe anyone who came by the area, unless they were a "person of special interest".

Rean bested the two scouts before crossing blades with Kurogane. Kurogane proved much more powerful than his henchmen and managed to force Rean to activate his Lucid Spirit Unification, which allowed him to catch Kurogane off guard. Before he could land a counterattack, Rean's tachi was snapped and Kurogane saved thanks to the sudden appearance of Hime. Hime informed Rean he wouldn't find his master here as the ninjas departed.

Kurogane first appears when he reinforces Shizuna near Longlai following her battle with the Arkride Solutions Office and Grimcats. He comments that the party should not be rude to his princess but is interrupted. he then withdraws from the area.

The Ikaruga are then deployed in Oración, taking part in the operations against Almata but then caught up in the subsequent death game. Kurogane is keen to use the opportunity to spread the name and reputation of the Ikaruga throughout the underworld, challenging Van (should he chose to align himself with the Ikaruga) that partnering with another force will hinder that objective. he tests the party, asking Bergard Zeman to abstain. He jokes that the copies he makes are his brothers and proceeds to align himself with Van's group. After assisting in Oración, Kurogane makes preparations for the Ikaruga to withdraw.

Should Van align with any otehr party, Kurogane will instead act as an opponent in the waterways beneath the city, fighting the party alongside Shizuna. After the initial bout, he cautions Shizuna about going to far with her abilities and stating do so might call the contract into question. He also cannot stop her and apologises when she enters her enhanced state.

Kurogane spends time with Salvatore Gotch, Ashrad and Rion Balthazar in the Dark-Light District in Edith in the run-up to Revolution Day. He may assist Shizuna and the party in the final battle around Genesis Tower, helping to take out the Diabolos Pillars.

Appearance in Trails into Reverie 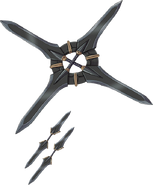