Aqua
v · e
Kyle Capua (キール・カプア), romanised in Japanese as Keer Capua, is a member of the Capua family.

Kyle is a young man with aqua colored hair and green eyes. He wears his hair in a ponytail tied with a red tie and keep goggles in his hair. He wears the uniform of the Capua Sky Bandits consisting of a green and brown fur lined flak jacket, shirt, trousers and armoured boots. Kyle wears long red gloves, orange shoulder guards and carries around several explosives, his weapon of choice.

Kyle is the laid-back and cool brother in the Capua family. He often acts as a voice of reason for his older brother Don and younger sister Josette, though he can get easily flustered at remarks from his siblings, Don and Josette, no matter what they throw at him. He also has an eye for catching important details and places, often pointing them out to others he feels that can make use of them.

The Capuas used to be Erebonian nobility until they lost it all (except their ship, the Bobcat, and themselves) to a corrupt deal. Kyle is the younger brother of Don, and the older brother of Josette Capua.

Kyle is first met at the end of the prologue, rescuing Josette with the Bobcat after she was defeated by bracers and almost arrested for stealing an Esmelas Crystal.

Kyle is next seen at Valleria Lakeshore at night where he meets up with Lorence Belgar and other Intelligence Division members to discuss the ransom for the Linde's passengers. After the meeting, they fly back to their hideout in Nebel Valley, with Estelle Bright and company stowing away. Upon arrival at their base, they talk to Don, who after hearing of the news decides that the hostages shall be killed once the hostage money is received. Kyle disagrees with Don's decision and as a result, Don attacks him. However, before the fight could progress any further, the bracers burst into the room and defeat the Capuas. By using a smoke bomb at the correct moment, the Capuas escaped, only to find themselves facing the Royal Army of Liberl and subsequently, arrested for piracy.

Following their arrest, the Capuas were imprisoned in Leiston Fortress. While breaking out Albert Russell, the party encounters them in their jail cell before leaving them as they were.

To serve as an "apology" for their actions, Dunan von Auslese made them compete in the Martial Arts Tournament. To do so, he changed the tournament structure from solo battles to team battles in order for the entire Capua family to be able to fight at once. In the first round, they manage to defeat a team from the Royal Army, however in the second round, despite managing to defeat 3 Intelligence Division members, they get single-handedly defeated with ease by Lorence Belgar afterwards. Kyle and the Capuas were not seen for the rest of the game however it is later revealed that after the end of this game, Joshua broke them out of prison in order to have helpers for accomplishing his goals.

Kyle is first seen checking out the ruins of Hamel alongside his family. He then converges with her family and proceed up a hill to where Joshua Bright is. Joshua coldly brushes them off while Kyle states that he doesn't understand Joshua's interest in this place. Afterwards, they head to Liberl. On the West Bose Highway, the Capuas and Joshua spend time taking out Archaisms disguised as men who are intended to be a distraction for the army while the 'Tea Party' is underway.

Kyle is later seen with Joshua and his family stealing the Bobcat from the new Nebel Base Training Facility located in the ancient ruins overlooking Nebel Valley. The group infiltrates the base and moves towards the Bobcat. As they are about to board, the group gets stopped by some soldiers. Joshua and co. then fight the soldiers and win the battle but then a man's voice interrupts them and Mueller Vander appears. Kyle gets the Bobcat started while Joshua and Josette keep him occupied. Popping out of the hatch, Kyle tells Josette and Joshua to hop aboard and they fly out of the base.

Some time after the dragon incident, late at night, the Bobcat is flying over the clouds. They identify a large red airship, the Glorious entering Liberl's airspace and Joshua makes plans to take one of the scout ships, using the Bobcat as part of a ruse to board one. Worrying for Joshua's safety, they trail the Glorious and later rescue Joshua and Estelle from the Society's airships.

A couple of days later, after the Liber Ark appears, the Bobcat is flying in the air spying at the ark from a distance. Calmly analyzing it, Kyle tells the others that its artificial and they make plans to raid it for loot. However, the engines soon stop working and they are forced to crash land on the city, where Kyle, his brother and the crew are taken prisoner and escorted to a brig on the Glorious, also in the city. Fortunately, the Arseille crashed a few days later onto the Ark and found Josette, who informed them of her brothers and fellow crew who were being held on the ship, and they were later freed by Estelle and the others.

While being held in the brig, Kyle mentioned to Estelle that he had heard some guards mention "Orpheus", which Estelle recognized as a passcode for the interfaces. Professor Russell provided him and Don instructions to help them repair their ship.

He accompanied the rest of the group after the Aureole disappeared and Georg Weissmann fled. After Joshua knocked Estelle out of the way of collapsing debris, Kyle recalled seeing an emergency evacuation route as another way off the Axis Pillar. The Capuas reached their ship and lifted off from the collapsing Ark. However, neither of them were able to reunite with the others, leading to Josette to order Kyle to turn around and find them. Kyle told her that he couldn't, as the Bobcat was barely flying and they would most likely die if they tried to search for them.

Following the events of the Orbal Shutdown Phenomenon, Kyle and his siblings were pardoned by Queen Alicia, paying off their debt with her own funds. The three decided to start the Capua Delivery Service, and they employed their former crewmen as workers.

Now running a successful delivery business, the Capuas are one day accosted by Gilbert Stein and his new G-Apache in the skies. They fight him and an army of airborne archaisms off.

A copy of Kyle is created on board the black Ark in Phantasma to act as a guardian for the area, but it is defeated and wishes the party good luck.

Kyle pilots one of three Bobcat class airships in the battle of Reverse Babel, two of which belong to the Capua delivery company and one to Neinvalli. He is not seen, but is mentioned as being present.

Kyle Capua as he appears in Sora no Kiseki FC Evo 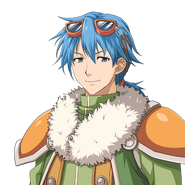 Bust shot of Kyle in Sora no Kiseki FC Evo 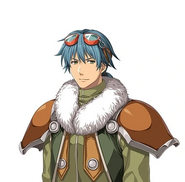 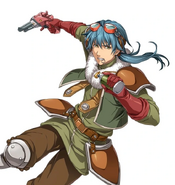 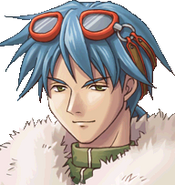 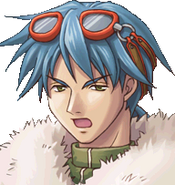 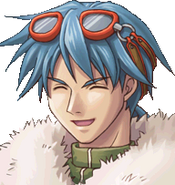 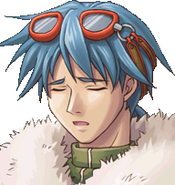 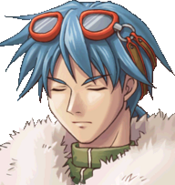 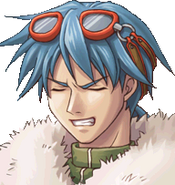 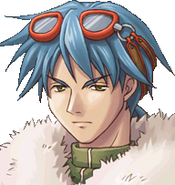 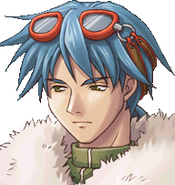