Lambert is a young man with brown eyes, thick eyebrows and swept back brown hair. He wears the standard nobles uniform of Thors Military Academy consisting of a white and purple blazer with gold trimmings, a white shirt and trousers and a purple tie.

While he is a noble, he shows to have a great passion and enjoyment when it comes horses. Enough that he cares for one black stallion by the name of Whitcomb, of whom the two share a deep bond as rider and steed. But never the less, Lambert shows himself with great pride and motivation when it comes to showing his fellow classmates both noble and commoner the ropes in horse riding. He and Jusis seem to show a good understanding when it comes to riding horses. He has a boastful spirit along with being ever optimistic.

He's shown to be an excellent horse rider, becoming Captain of the Riding Club at Thor's Academy. But he's also built well enough that he can even lift a two-handed sword and swing it effortlessly. When the Noble Alliance took over the academy, he was separated from his faithful steed, and went through a gruelling training over the next three months to strength himself along with obtaining an ARCUS Unit and using Combat Links, enough to challenge Class VII when they return to liberate the academy.

During the Great War, Lambert is one of the unseen Thors Graduates that helps on board the Ark Royal. He states he and his favourite horse will distract the enemy in their formation. 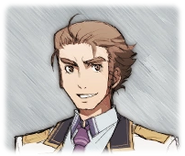 Add a photo to this gallery
Retrieved from "https://kiseki.fandom.com/wiki/Lambert_Mach?oldid=66184"
Community content is available under CC-BY-SA unless otherwise noted.