Laura is a young woman with amber eyes and long indigo hair, which is tied up a single high pony tail with one long bang in the front.

As a student of Thors, Laura wore the Class VII red uniform consisting of a red and white blazer with padded sleeves, a white collar shirt, a purple tie, and a green chequered skirt. Laura also wore knee-high heeled boots with laces all the way down, socks of equal length, and a black ribbon in her hair.

During the October War, Laura wears a white and yellow shirt attached to a green collar, with a blue skirt comprised of two layers, the back one longer than the front, and ending in a white frill. She wears leather boots without laces and a black ribbon around her collar.

Laura's post graduation outfit consists of a green collared shirt with a blue waist coat and yellow cravat. She wears a blue and white coat above this with a gold hem, blue belt worn open, and blue short shorts beneath. She now wears black thigh-high stockings topped with a lacy pattern and once again wears laced up knee high boots. She now has a silver hair ring.

Laura wields a colossal great sword in battle, with a blue patterned fuller, two edges that taper inward, and the symbol of the Arseid school in amber at the cross-guard.

Laura is known at the Academy for her pride, dignity and composure. She is not easily provoked, and tends to take everything in her stride, making it noteworthy when she is bothered by something.

She is single-mindedly determined to do everything in her power to become stronger. She views every new challenge and encounter as an opportunity for her to learn and become a better swordsman. She has a hard time accepting those she believes are not truly dedicated or trying hard enough. She values friends such as Rean, a fellow student of the sword, for the opportunity to grow as swordsmen together, and respects anyone who shows great strength.

Laura has a strong sense of duty as a noble, and a strong belief in the path of righteousness. She is often described by her classmates as like a "knight in shining armor". She can be a bit rigid in her beliefs, leading her to conflict with those who do not share her same ideals, such as Fie, who she has a hard time accepting due to her perception of Fie's past as immoral. However, she also shows an ability to move beyond her own prejudices, and has expressed shame in her own narrow-mindedness.

Due to her determination to become as strong as possible, and her upbringing as a noble, she can sometimes come across as overly formal and intimidating. However, this is not her intention, and she shows a willingness to teach and become friends with those weaker than her, such as Monica.

Laura was raised as the daughter of Victor S. Arseid, Viscount of Legram. Her mother is deceased. This information is confirmed in a brief conversation between Rean and Victor. She was taught in the Arseid school of swordsmanship, becoming proficient with a greatsword. She did not get to see her father often as he was busy running errands around Erebonia, but understood the responsibility of his duties.

Though Laura had the option of enrolling at St. Astraia Girls' School, she decided to enroll at Thors Military Academy at the age of 17 due to St. Astraia lacking martial arts classes. During the Thors entrance exam she was included as a candidate for Class VII and passed with flying colors.

Soon thereafter she discovered the truth in her father's words ('If you follow the path of the sword, it is only a matter of time before you encounter a follower of the Eight Leaves') by meeting classmate Rean Schwarzer, practitioner of the Eight Leaves One Blade school. During Class VII's first field trip together to Celdic, Laura pushed Rean to acknowledge his own path of the sword and to live his life with pride in himself. Laura hoped that one day Rean would become one of her regular sparring partners.

After escaping from Trista during the start of the Erebonian Civil War, Laura, Emma, Jusis and several other students managed to escape to Legram. Once she discovered that her father was absent from Legram, Laura decided to temporarily take over her father's responsibilities. Some time later, Jusis left to go back to Bareahard, leaving only her and Emma to try and gather intel about the whereabouts of their classmates.

After the civil war's conclusion, Laura went back to her studies and training at the academy. Once Rean returned from his military duties in Crossbell, Laura and the rest of Class VII were there to greet him and support him. Laura also acted as emotional support for Rean to help ease the burden of his new responsibilities and the weight of Crow's death.

In her final dialogue with Rean, Laura reaffirmed her desire to enter into the next stage of the Arseid school training to learn advanced techniques, and that she would be leaving Thors to do so. While she invited Rean to attend the session with her, Rean declined her offer and told her that the best thing for both of them would be to walk their own two paths and not to hold herself back on his behalf. Laura then departed Thors, preparing herself for the day that Class VII would reunite to save Erebonia from the eventual conflicts brought forth by Giliath Osborne.

Sometime after graduating from the academy, Laura polished her swordsmanship and became proficent enough to serve as an acting master and instructor. Instead of taking up the role of instructor, Laura opted to travel across Erebonia to visit the other schools to acquire new insights on the way of the sword, seeing them as mere checkpoints along the never-ending road.

In April S.1204, she learns through Olivert Reise Arnor about New Class VII's field study in Parm, where she serves as temporary instructor at the Vander Training Hall while waiting for Rean Schwarzer's arrival. After saving them from a perilous situation, she reunites with a warm embrance in front of his students. She meets Duvalie again for the first time in one year and a half with Ouroboros's attack on the Thors Branch Campus's training area. In response, the imperial government orders Rean to investigate Ouroboros' motives, to which Laura, alongside Fie and Elliot, agrees to assist. In July S.1204, Laura pays a visit to the branch campus. After watching a duel between her father and his former pupil, Aurelia Le Guin, Laura is granted a chance to battle the two veterans teamed up with Rean, Fie and Sara.

Following the reunion of Original Class VII in Heimdallr that same month, the graduates join New Class VII to infiltrate the Gral of Erebos in order to halt the Great Twilight the Gnomes and Ouroboros seek to realise. In the Gral, Laura fights alongside Rean, Gaius and Emma against Arianrhod and McBurn. As the battles in the Gral continues, her father aboard the Courageous comes to assist them, but the bombs implemented in the Courageous by Black Alberich cause the aircraft her father was on to explode in front of her eyes. However, immediately thereafter Rean completely loses himself as Laura yells at him to regain his consciousness, leaving her with no time to grieve her father.

Laura helped rescue Rean from the Black Workshop alongside her former classmates. In the aftermath of the attack on the Pantagruel, Laura learned that her father was still alive, but had been manipulated by the Erebonian Curse to help further the Rivalries. She resolved to surpass him, which she was able to prove by replicating his signature move during their fight at the Orchis Tower. This also freed him from the curse, and she was delighted to have her father back.

Laura is one of the classmates invited to help train Rean with his new Tyrfing S unit. She does so using her own Spiegel unit.

Laura arrives in Nord after the events with the autonomous tanks and mysterious white Divine Knight are over. She then participates in the group travelling to Mishelam to find the missing Sonorous Seashell and restore communications. There they encounter many robotic gargoyles and slay them, and meet Robot Mishy. Laura reveals she has spent the last months training, and that has included finding different versions of Mishy, of which she thinks the original one is the most brilliant, and used as a method of healing. She bonds well with Tio Plato, another connoisseur of Mishy. They all investigate the Castle of Mirrors and encounter Simulacrums of each other before fighting another Rean at the summit.

Laura is present in the final battle against Elysium in Reverse Babel. She identifies Ishmelga-Rean's blade as being a 'tachi of the end'. 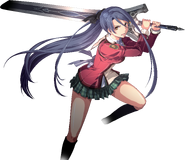 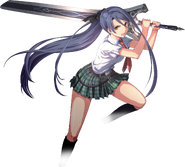 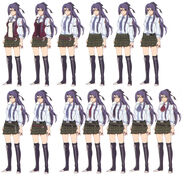 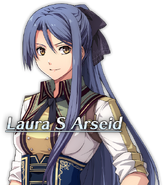 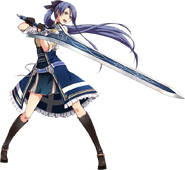 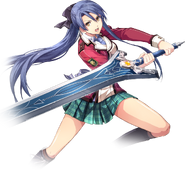 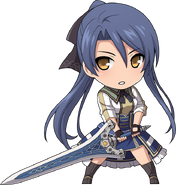 A screenshot of Laura alongside Elliot Craig and Rean Schwarzer from Trails of Cold Steel III.

A screenshot of Laura alongside Rean Schwarzer, Kurt Vander and Juna Crawford from Trails of Cold Steel III.

A screenshot featuring Laura alongside Michael and Fie Claussell from Trails of Cold Steel III.

Laura in the Gral of Erebos 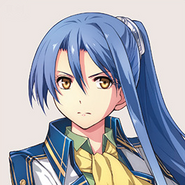 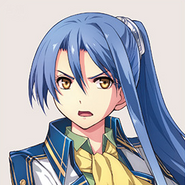 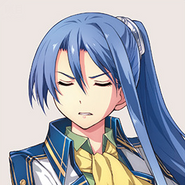 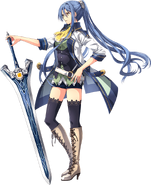 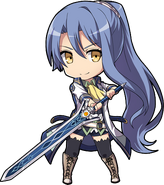 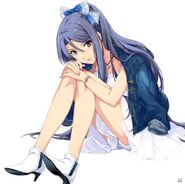