v · e
The Leiston Fortress (レイストン要塞) is the headquarters of the Royal Army of Liberl.

Leiston Fortress is located on the shore of Valleria Lake in the region of Zeiss, Liberl, approximately 337 selge north of the City of Zeiss, where it falls under supervision by Maximillian Cid.

Within a month after the outbreak of the Hundred Days War, the Imperial Army of Erebonia had occupied nearly all of Liberl's territory except for Leiston Fortress and the Grancel region, which remained in remained in opposition.

Unbeknownst to the Imperial army, three patrol ships were secretly being developed behind the walls of Leiston Fortress by professor Albert Russell. Upon completion, they were despatched by veteran commander General Morgan and directed under Cassius Bright's tactics to cut off the Imperial Army's supply routes and rendering them into smaller divisions. A large scale counterattack was launched and the outcome of the war was tipped in Liberl's favour.

Thanks to Leiston's opposition during the war, it is now largely considered to be an impregnable fortress.

Leiston was occupied by Colonel Alan Richard and his intelligence division's coup as part of their tightening grip on the Royal Army. With he and his family threatened, Major Cid was forced to relinquish command of the base to the Colonel and helplessly watch over a kidnapped Professor Russell imprisoned in the fortress' research wing.

Fortunately, Estelle and Joshua Bright, accompanied by Agate and Tita, infiltrate the fortress to resolve the situation. After finding their way into the research wing, they discover Professor Russell's kidnapper and also uncover the mastermind behind most of the events in Liberl so far. The group eventually frees the Professor and escapes with Major Cid's secret assistance.

After Richard's coup is thwarted, the army starts reorganizing under Cassius's command following his reinstatement to the army. Cassius would then spend most of his time operating from Leiston. Major Cid, for his loyalty and assistance in overcoming the coup, is promoted to lieutenant colonel.

The Capua Sky Bandits, Mayor Dalmore, Gilbert Stein, as well as members of the Royal Guard have been imprisoned here. Following the coup, Kanone Amalthea, Alan Richard and the disbanded intelligence division have also seen imprisonment.

A copy of Leiston fortress is created within Phantasma, named the "Impregnable Fortress" on the Sixth Plane. Copies of guardsmen and military monsters are created, as well as copies of some of Liberl's greatest warriors associated with the military acting as guardians including Kanone Amalthea, Maximillian Cid, General Morgan and the final guardian, Cassius Bright. 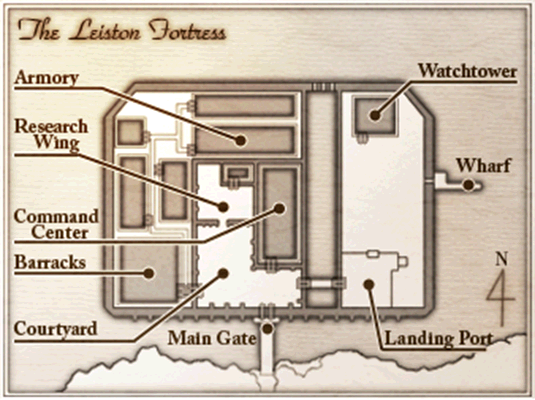 Add a photo to this gallery
Retrieved from "https://kiseki.fandom.com/wiki/Leiston_Fortress?oldid=52147"
Community content is available under CC-BY-SA unless otherwise noted.