Kiseki Wiki
Register
Don't have an account?
Sign In
Advertisement
in: Pages with broken file links, Characters, Zephyr,
and 6 more

Earth, Water
v · e
Leonidas (レオニダス), also known as the Behemoth (), is a regimental commander of Zephyr. He is usually seen with his companion Xeno.

Leonidas is a towering, bulky man with black, braided hair and wears spec glasses over his eyes. As with most members of Zephyr, Leonidas wears the standard uniform; a dark grey-violet coat with sleeves rolled up to the elbows; with silver lining designs, an emerald turtle-neck shirt underneath, tan bare baggy pants, dark black boots and hand to wrist cover fingerless black gloves with straps.

His expertise is in wielding a massive mechanized gauntlet that excels in close quarters combat, which was created by the Black Workshop. His huge size, along with the weapon he uses, has garnered him a reputation as the "Behemoth".

Leonidas is a bulky veteran jaeger who speaks with a deep tone. Like Xeno, Leonidas also cares for his comrades, especially Fie, serving as an over-protective father figure, but respects the decisions she makes, even if it means she has to cross blades with him. As a jaeger, Leonidas takes his duties seriously, but is significantly more collected than Xeno.

Leonidas was born in a family of warriors and raised in east-central Zemuria. His remote hometown was rich with septium, making it a target for bandits and armed merchants. Eventually, the merchants invaded with a military airship. Leonidas managed to repel their invasion thanks to Zephyr commanding officer Garcia Rossi, who happened to be in the vicinity at the time. Ever since Leonidas swore his lifelong loyalty to Zephyr's commander, Rutger Claussell, to return the favour of having his family saved from that fateful incident.[2]

Although first shown in Trails of Cold Steel, Leonidas is formally introduced alongside his companion Xeno in Trails of Cold Steel, Chapter 1: "Unconventional Studies". Serving the Noble Alliance during the Erebonian Civil War, they fight with Class VII at the ruins of Garrelia Fortress and soon thereafter in Ymir. After the Intermission: "Aboard the Pantagruel", Leonidas and Xeno continue their work in western Erebonia until they're called back by Duke Cayenne on December 30 to defend the second stratum of the Infernal Castle, where they faced off against Fie Claussell and the rest of Class VII once more. They revealed to Fie that other Zephyr members had split up on Rutger's orders and that they were working on bringing him back from the grave.[3]

Following Rutger's revival, their work throughout Erebonia leads them to several counters with Class VII, revealing that they only cooperated with the Noble Alliance at the request of their "true employer",[4] the Gnomes, in order to gather intelligence. He continues to work with Xeno, this time as members of Zephyr, to help Alberich and Giliath Osborne spur on the Great Twilight. After preparing the stage for the Rivalry between Rutger and Rean Schwarzer by fighting Class VII, he and Xeno side with them for the infiltration of the Salt Pales.

In the aftermath of the Great War, Leonidas continued to accompany Xeno in rebuilding Zephyr per their boss' final request.

Leonidas, alongside Xeno, would rejoin their former comrade Garcia in the forces deployed by Vita against Reverse Babel. 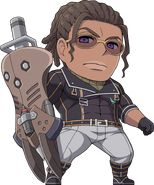