Rapier
v · e
Loggins (ロギンス) is a second year student at Thors Military Academy's commoner Class IV ('03-'05). He is in the fencing club.

Loggins is a tall young man with brown eyes and matching spiky brown hair. He wears the standard uniform for commoner students at Thors, consisting of a green and white blazer, shirt and chequered trousers. Loggin wears his uniform fairly neatly, with the exception of a loose tie and top button on his collared shirt. He has a golden cord hanging from the lapel of his blazer. Loggins uses a simple sabre in combat.

Loggins has a very short temper, actively getting angry and irritated, mostly at Patrick T. Hyarms who is a first year noble of the fencing club. He is quite protective of Alan whom is always put down by Patrick due to his skills not being as high a Patrick's.

He is good friends with the captain of the club, Friedel, a noblewoman as well as the strongest second year in the academy. Loggins and Friedel make sure the first year club members are kind to each other. Friedel seems to be the only one who can make Loggins flustered. She always brings up his first time at the fencing club when he talks badly about Patrick, making him stutter and look away.

Loggins joins Thors as he hasn't got much clue what he wants to do in life. he is quite bulky and tough, so he thought a career in the military could be the best choice.

Loggins is a member of the Thors fencing club, where he trains frequently with his rival Friedel. The new academic years brings some new students to the club, including Alan and Patrick. Loggins is protective of Alan to a certain degree, as the latter is not as confident or skilled as the arrogant Patrick. Loggins is not a fan of Patrick, thinking him arrogant. He compares Alan's drive to his own feelings about his rivalry with Friedel, using that they could become good friends, as he has. Overtime, he sees Patrick grow kinder and more aware, after which Loggins realizes he's not so bad after all.

He goes around the festival with Freidel, who is conquering all of the attractions one by one. Loggins mentions it took him several tries to beat the Gate of Avalon, citing Sharon as a particular obstacle.

During the October War, Loggins and Alan are acting as a resistance force, and are planning to retake Trista on their own accord before linking up with Reana and the other students. Loggins figures the best way he can help is by setting up some training using Combat Shells on board the Courageous. He speculates that Friedel will be amongst the Order of the Lion defending Trista.

After graduation, Loggins defers joining the military, and instead travels with Friedel.

During the Great War, Loggins is one of the unseen Thors Graduates that helps on board the Ark Royal. He is going to be helping Friedel take care of any disturbances on the surface sand would like to show off the skills which they have learned in two years of training. 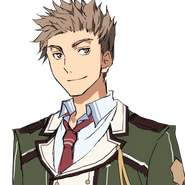 Add a photo to this gallery
Retrieved from "https://kiseki.fandom.com/wiki/Loggins?oldid=65184"
Community content is available under CC-BY-SA unless otherwise noted.