Lost Arts (ロストアーツ) are a set of spells cast through particular quartz created during the Dark Ages that consist of multiple septium gemstones. Their enormous power combines the power of three different elements together. Thanks to similarities in orbal wavelengths, the Lost Arts can be cast inserting the corresponding quartz in the ARCUS. It can only be inserted in a element-locked slot that corresponds with one of the three elements of the quartz. While the Arts themselves, are powerful, simply equipping the quartz grants large stat boosts.

In Trails of Cold Steel II, Lost Arts can be found in the second half of the game by defeating Cryptids. Each Art can be used only once per battle and will consume 100% of its user's total EP. They return in Trails of Cold Steel IV and Trails into Reverie additionally granting large stat buffs. In Reverie's extra chapter, the lost arts can be upgraded to give larger stat boosts.

Lost Arts have an extremely long cast time. As such, it is considered advantageous to use them during Zero Arts turns, which also has the benefit of eliminating their enormous EP costs, or equipping the character with Cast quartz or using the Brave Order system to reduce casting time. 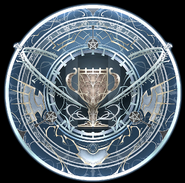