Luciola is a woman with striking cerise eyes and bright blue hair, long enough to reach her calves. She wears a long black and cerise dress of eastern style that gathers at the floor and consists of multiple layers. The top half of the dress, styled after several black strips, covers very little, exposing most of her chest and navel. She wears two long detached sleeves that also reach the floor. the sleeve, and the cloth on her dress feature red eastern symbols as well as the emblem for Ouroboros. Around her neck, Luciola wears several amulets and necklaces, and she has a silver pin in her hair, tied up in a long tail.

Luciola has a very mysterious personality. She tends not to reveal her true self and hides her emotions behind a veil. Despite this, she does care about people and hates the idea of a country being destroyed by the Glorious. She also suffers from guilt over killing the man she loved.

During her time in the circus, Luciola developed a sisterly bond with Scherazard Harvey. Even after becoming an Ouroboros agent, Luciola still cares for her. According to Scherazard, Luciola would never perform a trick that she would not be able to return from.

Luciola was originally born to a family of ancient magical illusion practitioners. However, for reasons unknown, Luciola either abandoned or was abandoned by her family. It was then that Luciola met Mr. Harvey who recruited her for his circus as a dancer. Some time after Luciola joined the circus, Mr. Harvey and Luciola came across a young Scherazard Harvey who was living as a street orphan at that time.

The pair then adopted Scherazard into the circus soon after with Luciola teaching Scherazard all of the tricks and trades of being a circus performer. Over the course of Schera's training, Luciola develops a sisterly bond with Scherazard with Luciola being the older one.

In S.1190, Luciola becomes acquainted with a young Estelle Bright who had snuck backstage in order to meet the performers and they later become friends, often playing together whenever the circus visited Rolent. It was also during this period that Luciola began to fall in love with Mr. Harvey.

However, in S.1194, tragedy happened when Luciola murdered Mr, Harvey by pushing him off a cliff after he had rejected her confession of love. Luciola then covered up the murder as an accident and watched as the aftermath of the incident unfolded. When the circus later disbanded that same year, Luciola left on a private journey, leaving a distraught Scherazard behind.

After the disbandment of the Harvey Circus in S.1194, Luciola roamed the land for a bit before she was recruited by Ouroboros. During her time at Ouroboros, Luciola completed many missions and due to her illusion skills, she quickly rose to the ranks of Enforcer.

In S.1202, Luciola is assigned to the Gospel Project where she reunites with her fellow Enforcers and is assigned by Georg Weissmann with overseeing the Gospel experiments in Rolent. During these experiments, Luciola heads to Rolent and goes to Mistwald where she places one of the Gospels into the Great Servais Tree. She then used the mist generated by the Gospel to place people into a dream like state.

At some point during this, Luciola became aware that Estelle, Scherazard and the others were tracking her and lured them to Mistwald, where she traps them in a fog maze and sets mist monsters upon them. After escaping, Luciola 'rewards' them by activating the Gospel and placing everyone barring Scherazard into a dream-like sleep.

After Estelle and co. wake up, Scherazard calls out for Luciola to show herself, which she does. After a reminder, Estelle remembers that Luciola was 'Miss Luci.' and that she had seen her at the troupe performances. Shocked, Estelle asks how this could've happened and Luciola tells Estelle to ask Schera because she knows. Schera replies that its an illusion spell using bells which is Luci's specialty. Schera then angrily asks if the fog is an illusion too, and Luciola replies that's its not. Luciola then further informs the group that the fog was a Gospel Phenomenon that interferes with dreams. Shocked, Schera asks if a Gospel can affect the human mind and Luciola informs her that it apparently can and that her bell was ultimately a guiding tool for it. Luciola also informs them that when the bell and fog is combined with the Gospel, it can create realistic illusions too.

After warning the group about Ouroboros' increasing strength, Luciola then takes the Gospel and fades away promising to meet again soon. Schera runs up to the tree, but Luciola had already disappeared.

After the incident, Luciola arrives on the at the top of Saphirrl Tower. Looking at the device, she notices how spot on the professor's research was as an airship passes by. The airship then flies near the roof and Luciola greets Walter and Campanella who come out to see her. Estelle's group reach the tower of the tower and they face off against Luciola for the first time, however she once again uses her illusions to retreat. Luciola is present onboard the Glorious when the Liber Ark is unsealed.

Luciola takes part in the enforcer raid on Grancel, making short work on the army, royal guardsmen and taking the queen and princess hostage. They retreat after more reinforcements arrive.

Luciola is the third Enforcer that Estelle and company fight on their way up the Axis Pillar. Guarding the third terminal, Scherazard confronts Luciola over Mr. Harvey's death, asking her why he murdered the person who cared for them so much. Luciola stated that although Mr. Harvey cared for them, he would never resort to dirty means, which resulted in him using his personal funds before accruing massive debt. He intended to repay his debts, but would give the troupe to an old acquaintance of his. She tried to convince him to stay, but he refused, so she ended up killing him, before battling the group.

Despite the use of her magic, Luciola is eventually defeated. She then reveals that she was hiding several facts about Mr. Harvey's death; the first part of the story was true, but Luciola admitted that she also had romantic feelings for Mr. Harvey. However, Mr. Harvey did not return her feelings, and at that point, she realized that he would only treat her as a daughter. This caused her to snap and kill him; when she came to, she realized her mistake and wished to atone for it, as it was not something she wanted to subject Scherazard to.

Luciola then walked off the edge of the platform, but was caught by Scherazard, who used her whip to stop her from falling. Although Scherazard wanted to pull her up, Luciola refused and wanted to have a few more words with her. She admitted that she did not regret killing Mr. Harvey, but leaving her behind was the worst decision she ever made. However, upon seeing how mature Scherazard had become, she was proud of her and said farewell as she cut the whip, falling to her apparent death.

A copy of Luciola is fought alongside Walter and Bleublanc in Phantasma's sixth plane, on board the Black Ark.

Luciola's death was revealed as simply a ruse as Luciola had teleported away to safety. She was listed as missing by Ouroboros, but had taken up residence in Mishelam Wonderland as a fortune-teller. During this time, she lends Campanella some of her mist monsters as he greets the Special Support Section.

While her identity is not directly revealed, attempting to have your fortune told with two particular characters will reveal bits about her background, the first being that she used to hone her skills in a circus, while the second being that she once knew a bracer who came from poverty, but after meeting her and subsequently an exceptional person who provided guidance, that woman became an excellent bracer.

Campanella suggests that if the Second Anguis were to return to Ouroboros, Luciola might as well.

Although Luciola does not appear in-game, Luciola eventually learned of Scherazard's marriage to Olivert. Still in touch with Bleublanc, she wrote to Scherazard, congratulating her on her marriage. She stated in the message that she was also fine and urged that Scherazard put her happiness first without a second thought. 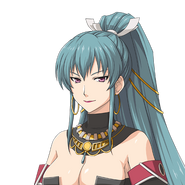 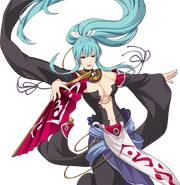 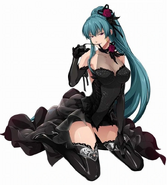 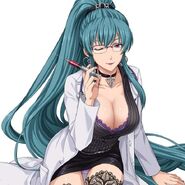