Lucrezia is a tall woman with long flowing blonde hair. She dresses in a dark and elegant gothic style with a lacy dark violet dress with a skirt that opens up towards the front, revealing a thinner pencil skirt underneath, suspenders and thigh-high stockings. She wears violet high-heeled boots and elbow length opera gloves. Around her waist, she wears a lacy belt with a black sash and two purple roses as an attachment. Her outfit is embroidered with a butterfly pattern, likely referring to her namesake. Lucrezia also wears a large brimmed black hat with more purple roses and a dark veil which obscures her eyes.

She wields a grotesquely large butter-knife shaped weapon called the “Dusk Glaive,” which she uses to unleash fierce attacks that erase space itself. This weapon has explicitly been granted to her by the Grandmaster, just like McBurn's Angbar and Loewe's Kernviter, and, like them, may be Divergent in nature.

Lucrezia is a woman with a unique air about her, who always covers her face with a veil so her expressions are never visible, and is characterized by her gentle and elegant speech, which masks her true intentions. She is not the type of person who sentimentalises over past acquaintances.

Lucrezia was originally a member of the Order of the Moonlight Horse, an assassination organization. She joined Ouroboros alongside fellow Order members Ellroy Harwood and Kreuger, after the Order was destroyed by Ouroboros in S.1194.<ref.name="Sen3-060520" /> She recounts that as the society was an 'exclusive club' the pair of them had trouble fitting in. At some point, the Grandmaster gave her the Dusk Glaive, a weapon capable of distorting space.

Sharon recounts her time before entering the Reinford Family and mentions Lucrezia's existence. When she later encounters F. Novartis and the subject of the Golden Butterfly and Oathbreaker are brought up and regret Sharon's departure, she remarks that they both know that those two are not that kind of person.

Lucrezia appears in Calvard accompanied by fellow Enforcer Walter Kron, and Harwood (who became the Fourth Anguis). She is first seen in Tharbad, attending a bar in a night club with Harwood, but not revealing herself. She also appears for a short stay in Longlai, where she is dressed in a yukata and shows her face, again not revealing her identity. She tempts Van with spending time with her but he declines. She gives the party information when Yumé goes missing, before catching a train.

Lucrezia accompanies Harwood when he pays a visit to the Arkride Solutions Office, introducing herself as Enforcer III. She comments on the difficulty of opponents from Almata and Garden and states that they plan to be indiscriminate when taking them out in Oración. Lucrezia provides details on the fall of the Order and the formation of Garden. As she departs she wishes the party well. She and the other Ouroboros members establish a foothold in Oración and she comments that Gerard Dantes might be as bad as Harwood.

Reuniting with Renne whilst in the city shopping for perfume, she comments on how much she has grown. She can be found in the basement floor of the hotel where she states that Walter and herself are not as scary as Harwood and that Renne must have been telling stories about them. She continues to drink alone when the other two are out, musing the Society always makes things interesting.

If Van sides with Ouroboros in the death game, Harwood has the party fight Lucrezia, "one of the best the Society has to offer" as a test to prove their worthiness. She unleashes the Dusk Glaive and the condition: Survive her is given for their success. The party does so and Lucrezia and Walter join forces with Van. When Harwood drops out due to Van deducing his plot with chemical weapons, Lucrezia says that she would prefer to do it via combat anyway, and although losing Harwood is not ideal, her ultimate loyalty is to the Grandmaster. She taunts Walter and about his similarity to Celis Ortesia. When reaching the Vashtar Palace Ruins, she and Melchior exchange pleasantries and briefly talk about the past. After the game, she and Ouroboros depart.

Should Van choose any other path, he will encounter Lucrezia, Walter and Harwood in the waterways as one of the final opponents.She congratulates the party for getting so far, but withdraws when Harwood states he doesn't want to kill off someone he hired with his own Mira. Van deduces that Ellroy is using chemical weapons and calls him back, where she and Walter engage the party in battle. After the battle, Harwood concedes and hands over the access keys, withdrawing from the game, and taking Lucrezia with him.

On Revolution Day, Lucrezia visits Edith and finds herself in the Dark-Light District's fighting arena. She does not wish to be partnered with Walter again so soon, so they rearrange the random teams. Walter refuses to side with Zin Vathek so once again they switch and Zin ends up fighting with Lucrezia. It is in the Dark-Light District that Van encounters her again when Pandemonium envelops the city. She joins the information exchange and she becomes intersted in Salvatore Gotch's banned books. Lucrezia muses that the other Anguis cannot interfere in Edith but perhaps the Grandmaster or McBurn could break in if they wanted. She may come to assist the party destroy the Diabolos Pillars in the battle to breach Genesis Tower.

Lucrezia depicted as a shadow looming over Sharon Kreuger 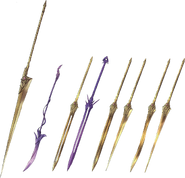