Lucy is a tall young woman with lilac eyes and long shining blonde hair. She is regarded as an extremely attractive individual.

During her time as a student at Jenis Royal Academy, Lucy wore the standard female uniform consisting of a navy and red waistcoat with a golden trim, a white blouse with black belts on the arms, a white cravat and a green brooch.She also wore a white pleated skirt, black knee high socks and brown shoes.

Later, during her role as a secretary, Lucy wears a white skirt suit with golden hem and patterns, mint frills and a mint blouse. She wears a pink bow on her neck, black tights and mint blue heeled shoes.

Lucy is a patient and kind hearted individual to all, with the possible exception of Lechter Arundel, whom she has less patience for and can be aggravated by.

Lucy was born in Remiferia. Growing up, she was a close friend of Lif.

She enrolled at the prestigious Jenis Royal Academy in Liberl, where she volunteered as the vice president of the Student Council. Admired by classmates and juniors alike for her beauty, Lucy can get rather aggressive when it came to Student Council president Lechter Arundel avoiding meetings and his responsibilities.

When Lechter submitted his notice to leave the academy without saying a word to the rest of the Student Council, Lucy smiled bitterly and said 'This is just like him' with tears in her eyes.

After graduating she moved back to Remiferia where she started working as a researcher at he her family's company, Seiland Company. There she actually ran into Lechter once again during one of his business trips to the principality. Instead of hitting him like he expected she actually ran up and to hug and cry in his arms, realizing the dangerous line of work he was in. The details of this meeting were relayed to Kloe by Lechter during the West Zemuria Trade Conference.

Lucy informs Chloe Barnett and Nacht Weiss about a series of bio-terrorist attacks that plagued Remiferia five years prior.

Lucy covertly enters Erebonia in a time of great political uneasiness and turbulence, gathering information for surrounding nations and meeting in secret with the Weissland Army to discuss Operation Mille Mirage. She encounters Juna Crawford and Class VII who deduce that she is from remiferia and someone significant judging by her travel choices. She states it is business but she and Kaela, who she is travelling with, get sussed fairly easily.

Lucy attends the conference as the aid to Albert von Bartholomeus, who is representing Remiferia at the tri-lateral summit onboard the Pantagruel. She enjoys some tea with Jusis, Elliot and Elise in a ceremony from Remiferia called 'Fika'. They discuss the significance of the name 'Seiland' in Remiferia and the small country's need for allies. Lucy also cautions Grace Lynn about being too ambitious for a good scoop. She then catches up with Kloe, Estelle and Alfin where they discuss the memory of Olivert Reise Arnor and Lechter. When Lechter arrives as part of the forces attacking the Pantagruel, Lucy doesn't press him too hard for answers, but extracts a promise from him to have a proper reunion after the war.

Lucy and Kaela are invited to the last night gathering at Mishelam where Lucy is also invited to take part in a drinking contest. She bows out before the final round however after failing to match Edel. Lucy is present at St. Ursula Medical College to check in on the Emperor and her Aunt Professor Seiland.

Lucy and Kloe greet a later Lechter at the Karel Imperial Villa for the reunion. Lechter claims to have been held up by a scuffle with a certain country's intelligence division. Lucy states she will forgive him this time but threatens him should it happen again. She states she has been busy with post-war clean up but has arranged with the embassy to have some time off. Lechter mentions Lucy has been juggling two or three jobs at the same time surprising Lucy who thought that this was confidential information. Lechter then gets a call to work and the reunion is post-poned.

Later after his mission, Lucy and Kloe find Lechter again and she becomes quite flustered with him, stating how much he means to them. They suggest a meeting in Liberl with Hans, Jill and Leo, and drag Lechter with them to the airport.

Lucy is seen onboard the bridge of the Arseille II when it arrives during the battle around Reverse Babel. 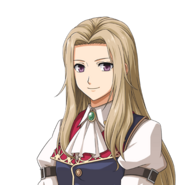 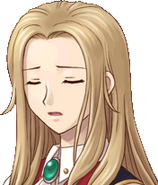 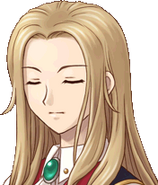 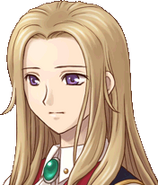 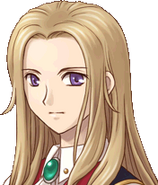 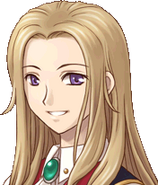 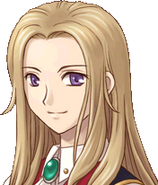 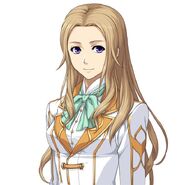