Kiseki Wiki
Register
Don't have an account?
Sign In
Advertisement
in: Characters, Bracer Guild, Trails in the Sky FC Characters,
and 2 more

Male
v · e
Lugran (ルグラン), romanised by Falcom as Legrand, is the main receptionist at the Bose Branch of the Bracer Guild.

Lugran is an elderly man with olive green eyes and medium length grey hair and a moustache. He wears a simple long-sleeved tunic with brown trousers and loafers with suspenders worn loose. Lugran also has a blue short cape fastened with yellow cord on the front and a blue and olive cap.

Lugran is a kind, elderly gentleman. He has a relaxed approach to people and can easily befriend them if he wishes.

Lugran is the main receptionist at Bose's Bracer Guild. He is friends with Mayor Maybelle and has known Cassius Bright and Scherazard Harvey for a long time.

During the Hundred Days War, he once worked for the Grancel branch, but transferred to Bose after it.

Lugran is introduced when Estelle, Joshua and Scherazard enter the Bracer Guild - Bose Branch. He introduces himself and after talking a bit with Schera, he informs Estelle and Joshua everything that he knows about the missing Linde and informs them that the military is still searching and that they have restricted information for the time being. He also informs them that since General Morgan has taken over the investigation, Bracers have been forbidden from entering areas where the army is investigating, making getting jobs done hard.

Estelle starts complaining, but Lugran offers an alternative in the form of Mayor Maybelle's request. He explains that Mayor Maybelle has officially asked the guild to investigate this matter. Before the group leaves, Lugran informs Estelle and Joshua about Junior Bracer procedures when entering a new region. He explains that Junior Bracers have to be registered with the Branch and after making them fill out some papers, he officially registers Estelle and Joshua at the Bose Branch.

After Estelle and co. visit General Morgan, Estelle and the rest inform Lugran on what they heard from the General about the Capua Family. Lugran informs them that despite General Morgan's attitude towards Bracer, Bracers and the army normally share a good relationship.

When Estelle and co. get arrested and are released by Mayor Maybelle, Lugran is seen again. He states that it's unprecedented for a Bracer to be arrested, but is relieved that they were released.

After Estelle and co. rescue the hostages and the Capua family gets arrested, Lugran is seen once again. Lugran proclaims that he is glad that the matter was settled quickly, he then pays Estelle for completing the request and gives both Estelle and Joshua recommendations from the Guild for a job well done. Lugran then starts thinking about Cassius and what he could be up to.

Suddenly, a postal worker arrives from the Linde and delivers a package from Cassius to his children. Lugran is then seen a final time, when Estelle and Joshua arrive to say goodbye before heading to the Ruan region.

Lugran plays a small role in the story, continuing his job as the Bose bracer guild receptionist. He welcomes Estelle and her group to Bose, giving them information about the monster extermination requests.

Lugran later liaises between Estelle and the army for the Operation Dragon Capture, as well as making sure she is prepared for various trips and missions, including the cold climate of the Nebel Valley. Lugran starts to recall something significant about the name Hamel but can't put his finger on it, saying the group did the right thing by letting Leonhardt go by the grave in Ravennue Village. After the operation, Lugran relays the message about Estelle being granted a 3 days at the Lakeshore Inn.

Lugran is later grateful to Estelle's group for delivering the Orbal devices around the country, allowing for the telephones to be restored.

Lugran chastises Anelace Elfead for eating too much ice-cream at the expense of her missions, but states that she has earned some time off when a request for her to train with Cassius is received. He remembers the past and the fame of Yun Ka-fai, expressing surprise that Anelace is his granddaughter. He gives her a leave to go to the fortress and train, wishing her luck and stating the monsters around the area would be no match for her now. 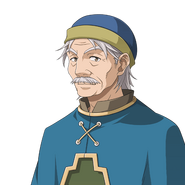 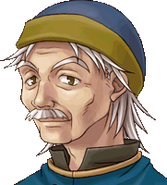 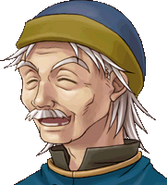 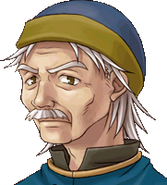 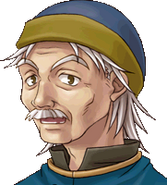 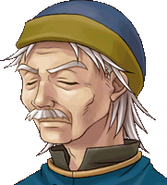