During his time at the Academy, Machias maintains a formal appearance with his standard-issue Class VII uniform. His red jacket is buttoned up at all times while wearing a black undershirt and black trousers. He also wears a belgrade blue tie, an ammunition pouch on his belt and duck blue loafers.

Machias's outfit during the October War is very similar in style to the Thors uniform, consisting of a light blue jacket in place of his red Class VII jacket. On his new jacket is a red Thors Military Academy armband on his right sleeve. He wears a pinstripe turtle neck but otherwise his outfit remains unchanged.

After graduation, and subsequent employment in the Inspectorate, machias wears their uniform consisting of a smart jacket with a black and white section on the front. His ammunition pouch is now larger and is worn on the other side. he wears a white shirt and red tie.

Machias is armed with an orbal shotgun. It has a wooden stock and pump, and features inlaid white engravings.

A hard worker and prodigy student, Machias is an overachiever who holds himself to strict standards, and expects much of the same from his classmates. He regrets losing the top score on the Thors Military Academy entrance exam to Emma Millstein, which further fuels his drive to succeed and leads to a friendly rivalry with her.

A well-known trait about Machias is his critical hostility towards the nobles and aristocrats for their unchanging traditions due to his family past. As such, he wouldn't hesitate to loudly open up his opinion with a negative manner towards the other noble students. Because of this, he directs most of his negativity towards other nobles, especially Jusis Albarea, his own classmate. Despite his behavior against nobility, he eventually develops an understanding that not all nobles are arrogant, and that inner character matters. As the series progresses and during his time in Class VII, he grows very close to his other noble classmates: Rean, Laura, and even Jusis. He eventually comes to the humble realization that he can trust them regardless of their social class or upbringing.

Machias is very studious, and is a person who takes his studies very seriously. Even during the Erebonian Civil War, he carries on with his studies as if there were no interruptions, fearing that he may fall behind otherwise. Similarly to his father, Machias enjoys coffee after a hectic day.

Machias is often quick to anger, frequently getting into verbal confrontations with certain classmates over political, academic, and social issues.

Machias was born in Heimdallr in S.1187, to Carl Regnitz and an unnamed mother.

Machias had a cousin named Elsa, of whom he was very close too, regarding her as a sister. At the time, Elsa had been dating Arthur, Carl's subordinate, and the two started a relationship, which Arthur's family did not approve of. As a result, she faced harassment and death threats from Arthur's family, and the relationship soon fell apart. Overwhelmed by grief, she committed suicide. The affair enraged both Machias and his father.

While Machias continued to rage at the incident, Carl decided to take matter into his own hands, eventually becoming the first commoner governor of Heimdallr, albeit his view of nobility had since mellowed. Machias eventually ended up enrolling at Thors Military Academy; rather then being placed into Classes III, IV or V (the commoner classes), he was placed into the special Class VII, a mix of commoners and nobles.

Machias makes his deep-seated hatred towards nobility known soon upon arrival, expressing his beliefs immediately following his assignment to Class VII after the Entrance Ceremony. Because of this, he instantly antagonizes his noble classmates, especially Jusis Albarea, a fellow member of Class VII. He gets along well with his commoner classmates, initially including Rean, but soon cuts off ties with him after learning that he kept his noble status hidden from him.

His feud with Jusis reaches a boiling point during a field study in Bareahard, where he begins arguing with Jusis over a failed combat link, only for the monster they defeated to injure Rean. Overwhelmed with guilt, Machias uses the experience to re-evaluate his beliefs and tries to make amends with everyone, especially Jusis after overhearing that his mother was a commoner. The following morning, he apologizes to Jusis, before he is inexplicably arrested by the provincial army with no cause. It is later revealed that Helmut had ordered his arrest in an attempt to blackmail Carl, who was Osborne's political right-hand man. Machias' classmates later free him from the provincial army's custody.

Following the Bareahard field study, he begins to see his classmates not only as colleagues, but also as close friends. Despite his early prejudices against nobility, his time with Class VII has greatly broadened his views, accepting the fact that there are good-natured nobles in the world.

During the Erebonian Civil War, Machias escapes from the Academy along with Elliot Craig and Fie Claussell, and goes into hiding with them in Celdic. After reuniting with Rean Schwarzer, he rejoins Class VII to aid in the war effort.

Following the conclusion of the Erebonian Civil War and graduating from Thors Military Academy, Machias decides to enter into a career in politics, enrolling at the political academy at Heimdallr. He graduated in only a year, meaning he could assume office as investigator for the Government Accountability Inspectorate at the age of 19.

Machias is amongst the members of the inspectorate sent to Crossbell ahead of the Royal Inspection visit, where he reunites with Rean and the new Class VII in the Orchis Tower. He remarks that it is hard for his force to do their work due to the current political climate, bureaucracy and political interference. Machias mentions that he would like to grabs some drinks with Rean at some point when they are less busy and catchup, stating that he has done so with work colleagues.

Machias joins Rean in hunting down the location of McBurn, Campanella and the Aion Type-β II who launched an assault on the Orchis Tower. Together they climb the Stargazer's Tower and confront the pair at the top, pushing them back enough that they are forced to retreat. Machias remains in Crossbell to finish his inspection work but resolves to join Rean at the reunion in Heimdallr soon.

he does indeed reappear at the reunion, where Class VII pledge to do all they can to support Rean and the direction the country should be heading in. Machias takes part in the operation to find Calvardian agents, and infiltrate the realm of the Dark Dragon where they fight and slay the reborn Zoro-Agruga.

Machias joins Class VII in protecting civilians against the manifestation of Magic Knights and Cryptids in the capital after the truth of the Empire and the Great Twilight is revealed. They travel to the Gral of Erebos where Machias assists in the battle against the Ironbloods, supporting Jusis as he duels his brother Rufus.

Machias, along with the rest of original Class VII recover more quickly than the newer members and advance the plan to find Rean by locating spiritual hotspots around the eastern side of the Empire. They had to complete some training before they were deemed strong enough in the Saint-Gral Labyrinth. Machias consoles Jusis about the loss of Millium. Machias is part of the boys' group in the attack on the Black Workshop to rescue Rean.

Throughout the rest of their operations leading up the Great War, Machias is present in the group and supports Rean and the class, taking his turn to watch over their leader. Machias eventually discovers the original events with his cousin were a result of the Erebonian Curse and manages to find some closure with the noble that was the root of his issues with the nobility for all these years.

As part of his job in the inspectorate, Machias investigates Wilhelm Ballad for corruption and misuse of funds, apologising but stating that it is his job. Machias expresses his concern over the amount of sugary treats Ballad has been ordering, and advises the man to watch his blood sugar levels. after inspecting his self-help books and concluding there was no clandestine operation going on, Machias leaves and apologises for the trouble, stating the purachase of the ship had spurred it on in the first place.

After inspecting the resulting damage to Orchis Tower during the liberation movement by the SSS, Machias and Alex Dudley later team up in Crossbell to put an end to a collaborative, criminal scheme between the Calvardian counterfeit goods lady and infamous con artist Minneth, who had been disrupting coffee supplies to Crossbell. Between the two officers of the law, they crack down on the two criminals in Crosbell City's harbour district and restore coffee distribution, allowing them both to once again enjoy their morning blends.

Machias is once again active in Crossbell and is assisting with preparations for the upcoming independence signing ceremony. He is within the state when Supreme Leader Rufus Albarea declares himself the ruler of Crossbell and afterwards joins the resistance efforts against him, along with Towa Herschel.

Machias joins Lloyd Bannings in the operation to help relieve Sonya Baelz at the Moon Temple. In the time before, he had been helping Randy Orlando in the Mainz region. He had been supplying their forces with assistance from Harold Hayworth.

Machias joins the final battle against Elysium and Reverse Babel. He is also amongst the number helping to progress through the Infinity Corridor. 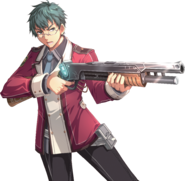 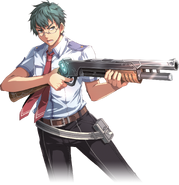 Concept art of the Regnitz family 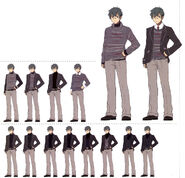 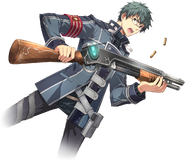 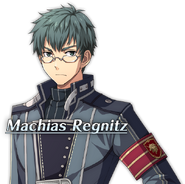 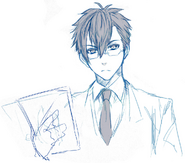 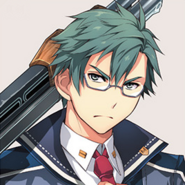 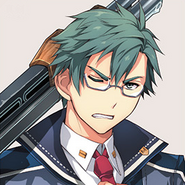 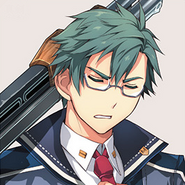 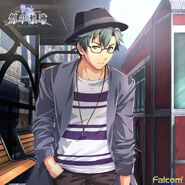