Magic Knights are golems of frightful magic, created during the Dark Ages by the Mages of Erebonia[1] as a means to oppose the Deus-Excellion.[2] They are capable of moving completely autonomously and can be regarded as subdimensional armaments.[2] The mages were given the technology to create them by Black Alberich.[3]

Multiple types of Magic Knights have been constructed based on the prototype Ol-Gadia:[1] Ortheim, a type that wields swords in each of its four arms[Note 1]; Direwolf, a powerful type with swollen arms; Heavy Ruby, a heavy type wielding a giant battleaxe; Sigurheim, a type wielding a greatsword[Note 2]; Dyna Golem, wielding iron balls[Note 3]; and Izra-Lucier, a centaur-like type.[Note 4]

Unlike the Deus-Excellion, which require a pilot, a Magic Knight could be simply purchased with mira, making them invaluable to infuential families.[1] Its fundamental design flaw of being capable of movement only when the septium veins were being stimulated worked in its favour as opponents of the Deus-Excellion, whose manifestation were enough stimulate the septium veins.[1]

Magic Knights were taller than the Golems created by the Crossbellan alchemists and approximately the same size as Deus-Excellion.[Note 5] 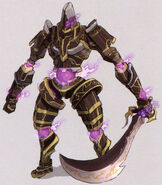 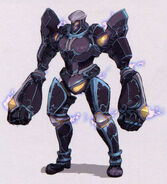 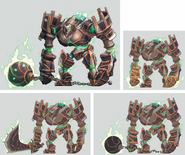 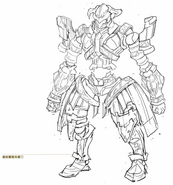