View source
watch 02:17
New Pokemon Games - The Loop
Do you like this video?
Play Sound

Mao is an elderly lady with warm brown eyes and greying hair tied back into a bun with a green pin. She wears a brown turtle-neck sweater, white pinafore and orange skirt with strapped brown shoes and a blue shawl draped across her shoulders. She wears a green amulet around her neck.

Mrs. Mao is a warm and friendly old lady with a grandmotherly disposition. Having known Professor Russell for most of his life, she treats Tita Russell like a granddaughter, though she also frequently reminds her that there's more to life than work and research and encourages her to remind her grandfather of the same. While Mrs. Mao is generally friendly, she's also very strong-willed and isn't afraid to deliver a scolding to whoever she thinks deserves it, be it Estelle, Russell or one of her co-workers.

She's the owner of the Maple Leaf Inn, a hot spring hotel that is the village's main tourist attraction, and she's the closest thing Elmo has to a village elder. She was born in a country to the east, but she and her family moved to Liberl when she was very young and she presumably met Professor Russell soon afterwards, as Mrs. Mao mentions she and Russell have been friends since they were "knee-high to a grasshopper".

When Russell returned from his time as Professor Epstein's apprentice, bringing his knowledge about orbal technology along to Liberl, he began the long process of getting his fellow countrymen to warm up to orbal-powered machinery. One of the first inventions he introduced in an attempt to show people how much orbal technology could improve their lives was an orbal-powered pump that could transport hot water from the springs in the nearby mountains to the village well and baths. The pump is forty years old by the time the game takes place, but since Russell still performs yearly maintenance on it, it's still running. Its age is starting to catch up with it though, and when it breaks down, Mrs. Mao contacts Central Factory in the hopes that Russell will be able to fix it up until it can be replaced entirely. Since Professor Russell is too busy investigating the Black Orbment at the time, Tita offers to go in his place with Estelle and Joshua providing escort to the village.

After Tita has gotten started on fixing the pump, Estelle and Joshua return to the inn only for Ed, the chef, to come rushing in to tell that one of the inn's guests wandered out of the village and into the monster-infested fields. Upon hearing that Ed didn't stop her, Mrs. Mao gives her chef a harsh scolding. Since the hotel guest didn't leave the village too long ago, Estelle and Joshua decide to go after her and Mrs. Mao, though reluctant to impose upon the bracers, requests that they bring her guest back safely.

Estelle and Joshua manage to retrieve the guest, who turns out to be Dorothy Hyatt, and Mrs. Mao offers the bracers and Tita to stay the night at the Maple Leaf Inn for free as compensation for their trouble, assuring them that the professor won't miss them since he contacted her earlier to let her know he'll be busy for the rest of the day. Estelle, Joshua and Tita gratefully accept her offer and head upstairs to drop off their luggage before heading to the inn's baths.

Some time after the trio headed for the hot springs, Mrs. Mao is suddenly startled by an ear-piercing shriek coming from the outdoor bath. Hurrying to the outdoor bath, she's dismayed to find out that Estelle merely screamed because she unexpectedly came face-to-face with Joshua. After scolding Estelle for causing a ruckus without proper reason, she tells her that a woman's skin becomes prettier by showing it off, which Estelle loudly dismisses. Reminding her that eastern bathing is considered a family activity, she encourages Estelle and Joshua to settle their spat and walks back to the inn.

Like all inhabitants of Elmo, Mrs. Mao hears about the attack on Central Factory, but remains unaware that her friend Russell was kidnapped in the process. Deciding not to worry the old lady, Estelle and Joshua decide not to tell her about the professor's kidnapping and subsequent rescue mission and merely smile and nod at her request to remind Russell not to overwork Tita.

Mao greets Estelle and her party when they arrive at the Elmo hot springs, having just been about to call the bracer guild anyway. Rather than the problem being the the frequent earthquakes, it is something unusual with the hot springs themselves that concerns her and she suspects something has happened at the source. She gives use of the hot springs over to the party. Estelle and the party help Mao solve a case involving a peeping Tom who turns out to be set of Creepy Sheep. They also help out with the pump.

Later, she greets Joshua and importunately states the hot springs are out of action due to the Orbal Shutdown Phenomenon.

Mrs. Mao is a childhood friend of Professor Russell and a grandmother figure to Tita.

She's also the employer of Addy, Cyril and Ed. 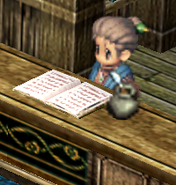 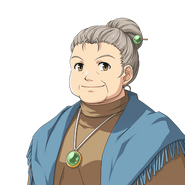 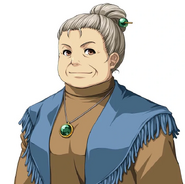 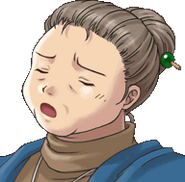 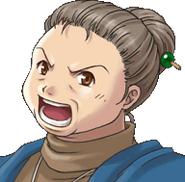 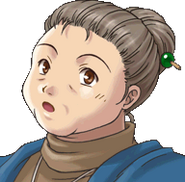 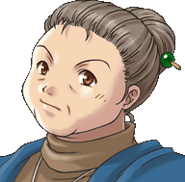 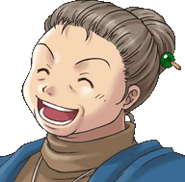 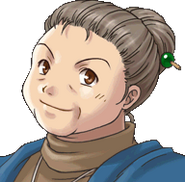