Margarita is a young woman with blue eyes and long blonde hair arranged in ringlets. She is primarily distinguished by her portly physique and pronounced lips. Margarita is shown to have a slimmer form in the later appearance, and can change between the two depending on her calorie intake.

As a student of Thors, Margarita wears the standard noble uniform consisting of a white blazer with a purple trim, purple bow, skirt and tights. Upon graduation, she wears a pink and white dress comprised on many layers and decorated with floral patterns and hemmed with frills. She wears elbow length opera gloves and has a pink bow in her hair. She wears pink flats and is often seen carrying a pink parasol.

Margarita is armed with an orbal cannon, which she uses with two hands.

Margarita is passionate about her goals in life, seeking to settle down with a suitable man, and once setting her eyes on someone- she is unrelenting in her goal to succeed in romance. Margarita has shown she is willing to go to extreme lengths to achieve what she wants, with remarkable perseverance. Margarita lacks the common arrogant view nobles often show to commoners, and is actually very helpful, considerate and loyal to her fellow students, willing to come to their aid.

Margarita is also quite vain, believing herself to have a beautiful figure that cannot be touched by any of the vast quantities of foods she eats.

Margarita was born as the daughter of Baron Dresden. She grew up in a family specialised in the cultivation of roses, which are even supplied to the House of Arnor.

After enrolling at Thors Military Academy in S.1204 to look for a future husband and become a better wife, her eye fell on Vincent Florald and offered him a grand rose, grown by her family, which symbolises passionate romance. Vincent clearly indicated that her love was not reciprocated, but she refused to give up.

Margarita is part of the cooking club. She joined out of a self-explained desire to become a better housewife, but does find she enjoys it.

During the October War, Margarita is one of the students that stays the academy, at leats at first. Her family did send someone to pick her up, but she later fled to keep up her pursuit of Vincent. She was distraught at losing her Vincent, but Millium convinced her to pull through and join their cause. Millium, who had been teaching Margarita different recipes, has Margarita make a promise to create a recipe that no-one had ever tasted before. Margarita's primary motivation for joining the cause is that by helping to liberate the Academy, she will be one step closer to Vincent, who is still there.

She expresses shock that a noble could set fire to their own lands. She says her father can be heavy handed, but would never do something like that.

A slimmer, almost-unrecognisable Margarita is encountered by Class VII at the canteen in the Titus Gate in the south of Sutherland. She had slimmed down in the hopes of becoming more appealing to Vincent. When Class VII and Anton are eyed suspiciously by the military forces in the area, Margarita lends her assistance by claiming they are escorting her while she take as gift from Liberl to Erebonia, and gets them out, leaving only Anton behind.

Margarita explains that she is part of a network of Thors graduates searching for those who went missing at the start of the Great Twilight. she had been exchanging information with Tatiana and is looking for clues. She is a bit upset that she could not keep her promise to Millium. She once again says she will sample all the rare dishes the party creates.

Vincent and Margarita are later found in Ordis, trying to find a way to stop Court Riveria from being shut down by finding a licence. They find it in the Kleist mall and Margarita pledges to support Vincent in their new shop. Margarita later comes to the aid of Class VII in the subterranean waterworks of Ordis, where she and Vincent engage the Imperial Defense Force whilst Class VII proceed to the Cayenne mansion.

Her efforts paid off after graduation. At the final night in Mishelam, Vincent and Margarita are officially dating- he wonders if he can really love her despite her appearances, but appears to be coming round. Professionally, Margarita decided to help out her family.

Margarita is amongst one of the contestants hoping to create a dish served at the royal wedding reception. The judges note the uniqueness of her dishes and she hopes to create more 'stamina gelato' for Vincent later. Freddy seeks her advice on his own dishes.

Margarita is present on Vesta Street where she is discussing the implications of Supreme Leader Rufus Albarea's takeover in Crossbell, stating that it amounts to declaring war on the Empire. She reveals that her investigation found many people dissatisfied with the results of the War but gets distracted at the thought of eating 30 portions of tomato curry. 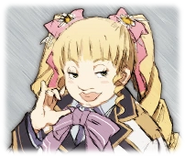 Retrieved from "https://kiseki.fandom.com/wiki/Margarita_Dresden?oldid=52046"
Community content is available under CC-BY-SA unless otherwise noted.