Kiseki Wiki
Register
Don't have an account?
Sign In
Advertisement
in: Characters, Anguis, Zero no Kiseki Characters,
and 7 more

Mariabell is a young woman with red eyes and golden-blonde hair - a trait she shares with her father, Dieter Crois. She wears her hair in twin tails arranged into ringlets which fall to her waist.

In her original appearance, Mariabell wears a red blazer with a dark brown cuff and hem, and a brown and white lapel. beneath, she wears a white wrinkled cocktail dress with a angled opening in the center. She wears white heeled shoes and a green pendant around her neck.

Her alchemist outfit is extremely gaudy, composed on mostly skintight black material opening up to reveal most of her bosom. Red linier patterns adorn most her outfit. A black metal collar encapsulates her neck. On her neck and hands she wears a lilac material embroidered with red beads and several green gemstones. The outfit incudes two extremely large pointed shoulder guards attached to her flared collar, also featuring purple guards. A similar protruding piece forms her skit. She also wears a headband with several protrusions.

Mariabell's anguis outfit is much more subdued. She features a suit blazer in dark violet with a violet lining and the Ouroboros emblem on the lapel. She has a matching skirt and ruffled pink top beneath, once again open at the bust. She wears tall stiletto heels and black tights along with outfit. Two purple feather like ornaments are in her hair.

Mariabell carries a large alchemists staff with the appearance of two spirals entwined ending in a large pointed array of spikes and red gems.

Mariabell's character and personality takes shape as a flashy rich executive with a sadistic side. Mariabell seeks to fulfil her family's ambition and unafraid of throwing friendships, family and others aside in the pursuit of this goal. She openly seeks to toy with others, taunting them freely and making light of their situations. Campanella likens her personality to Georg Weissmann, another twisted individual. Because Elie was her first true friend, Mariabell is overly protective with her, threatening to attack any man that makes a romantic advance towards her, although she is not exempt from being toyed with.

Mariabelle is an avid fan of the Rosenberg Dolls, possessing a large collection and utilising them as battle aids.

As the executive director of the IBC under her father, Mariabell had been entrusted with a number of enterprises and capable of serving as Dieter's stand-in. One of the significant tasks she was charged with was the development of Mishelam.

Despite betraying her family and friends, she is not entirely without care for them, as she hopes her father would not be sentenced to death because he is still valuable for Crossbell in the future, and her hometown regains independence.

Mariabell belongs to the Crois family of alchemists that have lived in Crossbell since the Great collapse. She is Dieter's only child and has had a close friendship with Elie MacDowell since she was young.

In the shadows, she committed herself alongside her father to finish the centuries-long plan to re-create Demiourgos, the Sept-Terrion of Mirage. Beginning in S.700, the Crois family secretly invested in ancient alchemy magic and the D∴G Cult to further this goal using their banking finances to replace the Sept-Terrion that had been lost.

Mariabell appears as Elie's best friend and extroverted personality figure working for the IBC. During the Cult incident, Mariabell and her father use their bulletproof car to rescue the SSS from the Gnosis controlled Crossbell Guardian Force and grant them shelter in the fortified IBC building.

Behind the scenes, secretly, using her influence as project leader of Mishelam's development, she manipulated Hartmann into organising the Black Auction so she could have the core of the new Sept-Terrion awaken on Mishelam. Mariabell had Arios MacLaine replace one of the auction's items, a Doll Studio doll suitcase, with a suitcase that held the sleeping KeA so that KeA could awaken safely under her supervision without raising suspicion.

Mariabell is purportedly primed to take over the day to day management of the IBC whilst her father runs for and successfully obtains the office of mayor. Unbeknownst to almost everyone in the city, the Crois family plans are nearing their fruition however.

She hired Bleublanc to setup a missing dolls sidequest for the Special Support Section. During a private conversation, it is reveal that she receives an invitation to join Ouroboros.

The Crois family had been working on the re-creation of Demiourgos for a thousand years together. However, in the final act, Mariabell abandons her father Dieter and his political ambition of using KeA and her powers to defend and expand Crossbell's control, replacing it with her desire to rewrite history itself.

She reveals this master-stroke as her father is defeated and apprehended at the top of Orchis Tower. Mariabell communicates using a magic circle and soon the Azure Tree manifests, where Mariabell and the others in the plot make their stand. Mariabell stands at the core of the tree with Ian Grimwood and KeA, confronting the SSS when they come to save KeA. She reveals her plans and attacks ian when he decides to stand down. She fights and loses to the SSS, and is left to watch as they confront the Azure Demiourgos.

Due to the heroic interference of the Special Support Section and their allies, the plan to alter history failed. KeA abandoned her powers and lost all value to Mariabell. Despite this setback, she had been invited by the Grandmaster to fill in the position of third Anguis that had been vacant for almost two years. Mariabell accepted and occupied the vacant position of the Third Angius, under the alias, The Wellspring Alchemist (根源の錬金術師).

Mariabell is only active behind the scenes in the lead up to the Great Twilight. She votes in favour of abandoning the Phantasmal Blaze Plan in favour of the Great Twilight plan, she proposes that the Red Constellation and Zephyr work together to achieve their goals, and she takes part in an attack on Arteria along with the Thousand Oathbreaker.

She takes the stage in Crossbell and Erebonia once again after the Great Twilight has started. Activating the Mystic Core of the Orchis Tower once again, She confronts Estelle, Joshua, Lloyd, Elie and Renne when they come seeking an answer to what had happened in Erebonia. She and Black Alberich have slight antagonistic moment towards each other when they remark that their families have been stealing technology from one another for centuries.

Mariabell arrives too late to take part in the battle at the Black Workshop, arriving on an airship just as the heroes are departing.

Using her disguised alias, Lady Rimabella, she asks the Bracer Guild to find her missing dolls – after Phantom Thief B stole them, though the Bracer Guild have Class VII take the case instead (which Mariabell knew would happen). She refers to them as the fake names Iris, Shana, and Canon though after Class VII find the dolls – the last one in Saint-Gral Labyrinth – they notice the names do not match what they were given after which, they suddenly attack the group. After they defeat the dolls, Musse Egret figures out that Rimabella is actually Mariabell (the name Rimabell being an anagram) who reveals herself and introduces herself to Class VII. She reveals the entire set of events were just a prank on Juna Crawford (with Mariabell impersonating Phantom Thief B), having wanted to see what Elie MacDowell saw in her, though Mariabell is disappointed in the fact that Juna is just a 'regular girl'. Roselia and the real Phantom Thief B arrive, and she agrees she owes him a favor for using his name without permission. Mariabell then teleports away, with Roselia unable to figure out where she went.

Mariabell leads Ouroboros' forces when the Glorious arrives to attack the multi-nation conference to plan Mille Mirage on the Pantagruel. She teleports onboard, and uses her staff to guide the Aion Type-γ II towards them. She confronts the girls' team along with Campanella and Shirley Orlando. After the battle, she teleports away and the Glorious withdraws.

Mariabell is next seen tending the barrier generator on top of Orchis Tower, preventing access to the Stella Sanctuary. The Mystic Core of the tower is now fully active and McBurn and another cursed individual are sent to guard it. Upon reaching the top however, Mariabell states she is really invested in the Rivalries and has no intention to stand in the party's way, teleporting both herself and the large shield generator away as she considered them worthy of continuing the rivalries after seeing them defeat McBurn and the cursed individual. She is later espied watching the closing moments of the diversion performance at Arc en Ciel theatre before teleporting once again. She does not attend Arianrhod's memorial, citing a lack of a close relationship and not feeling like she was suitable to attend.

Mariabell and Campanella contribute one last time to the rivalries by helping to stir conflict in the Tuatha De Danann. They admittedly do not fight with their full strength, stating they only intend to do the bare minimum but are motivated when their objective and operations are questioned and a promise to deliver some information is put on the line. they are defeated and try to withdraw, but they are pursued and made to reveal that their goal involves observing the ultimate fates of the Sept-Terrion in humanity's hands. before they are pressured to reveal more, the Aion Type-α II arrives and teleports them away.

Mariabell is later seen in the Celestial Globe where the Grandmaster declares the start of the Eternal Recurrence Plan.

Mariabell plays a small role, observing Cedric Reise Arnor onboard the Glorious and discussing with F. Novartis whether or not he is fit to be an enforcer.

A revenant hollow of Mariabell is encountered on two separate occasions within the Infinity Corridor. 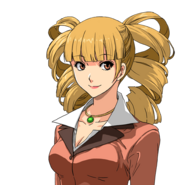 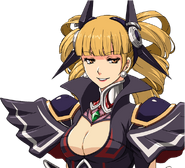 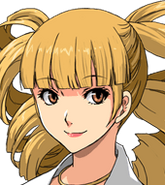 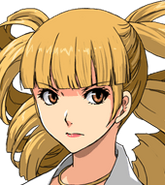 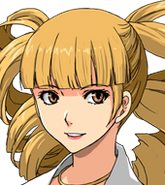 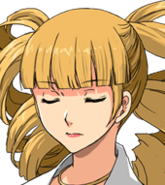 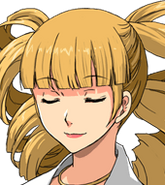 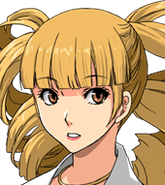 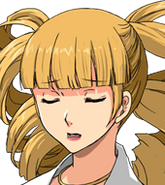 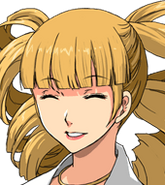 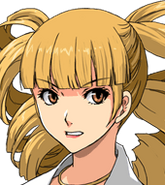 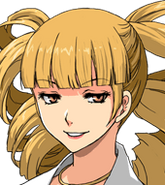 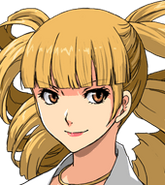 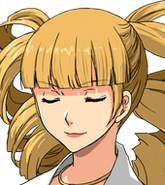 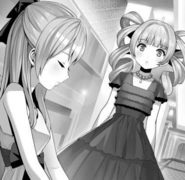 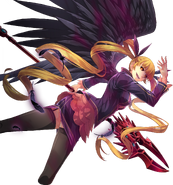