Kiseki Wiki
Register
Don't have an account?
Sign In
Advertisement
in: Characters, Vander school, Imperial Army of Erebonia,
and 2 more

v · e
Matteus Vander (マテウス・ヴァンダール), also known as the Thunder God (雷神), is the head of the Vander school and supreme instructor of martial arts for the Imperial Army of Erebonia at Garrelia Fortress.

Matteus is a large middle-aged man with dark brown hair, with a silver streak, and brown eyes. He wears a double breasted gray trench coat with a black strip down the center and a series of white lines across the button holes. He also wears thick leather boots and a series of belts. Around his shoulder sis a collared red cloak with silver trimming and black patterns, connected with a golden cord. Matteus is armed with a large great sword with a golden edge and red decorated fuller. The cross guard extend downwards to protect his hands on both sides.

Matteus is a strong silent individual who speaks only when needed. He will take any measure to test his opponents and will not hold back, even against family. He always wears a stern expression and is known for being strict, making him misunderstood by those around him. However, those who actually know him are deeply attached to him.

Matteus Vander is the current head of the Vander school. he has two sons, Mueller by his first wife (now deceased) and Kurt by his current wife Aurier Vander. Matteus is considered one of the five great commanders of the Imperial Army of Erebonia, the others being his brother Zechs Vander, Victor S. Arseid, Aurelia Le Guin and Wallace Bardias.

Prior to his transfer to the Garrelia Fortress, Matteus was stationed in the Valflame Palace as emperor Eugent Reise Arnor III's bodyguard. Such is his power and strong ties to the royal family, that the Emperor often entrusts secret tasks to him.

Days before the signing ceremony for Crossbell's re-independence, he started to behave oddly, contacting Claire Rieveldt of the Railway Military Police and providing his students with instructions. He travels to Ymir where he awaits Rean Schwarzer, his son Kurt Vander and the rest of New Class VII at the top of a mountain in the Ymir Range. Matteus and Claire then turn on the Class, wishing to test their strength. Matteus engages Kurt and Rean in battle and only stops when he is satisfied of their strength. The condition given was 'defeat him by 3pm or be disqualified'. During the fight, they enter the Eisenguard range and matteus throws Kurt off the cliff, citing that he will never make it back before the deadline, leaving Rean. All of Class VII make it to fight him together however and he is ultimately satisfied.

On the way back to Ymir, fearing a Magic Knight attack on the town, they discover Matteus has already slain them all. After some talk, Matteus provides information about the Prince Olivert Reise Arnor and his new wife Scherazard Harvey's disappearance and gives them the mission to find them. He also thanks Rean for his part in Helping Kurt through everything that happened leading up to the end of the Great Twilight. Matteus had thought it best to stay away from kurt, but now has second thoughts about that decision. he and his pupils had already searched the Ymir region for signs of the missing Courageous II. Afterwards, he helps take control of the Military situation following Supreme leader Rufus Albarea's coup in Crossbell.

Matteus returns in the final battle, having been teleported onto the Arseille II along with four of Erebonia's strongest warriors. His sword is enchanted and together they repulse a blast from Keraunos, the weapon of Reverse Babel.

Matteus and Aurier in the background 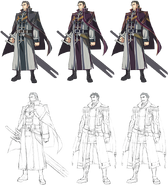 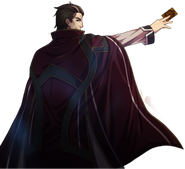