Turquoise
v · e
Maybelle (メイベル) is the mayor of City of Bose and the owner of the local Anterose Restaurant.

Maybelle is a young woman with bright blue eyes and long wavy straw blonde hair which is tied back with a red ribbon. She wears an ash and red dress made up of two layers, with long purple frills and an opening at the bust. The dress has a collar which is fastened by a golden brooch with a dark blue gemstone. A matching set of pins connects a golden cord in the front of her dress. She also wears small brown flat shoes with silver toe caps.

Mayor Maybelle is a pleasant and easy-going person who doesn't brag about her vast wealth and who's still trying to prove herself worthy of her father's heritage. While she's usually polite and proper, she can be spontaneous and unrestrained as well, as shown when she was the only mayor at the banquet to openly voice her misgivings about the duke's ascension to the throne and the way the announcement was handled.

Maybelle's election was rather controversial at the time due to her age, seeing that she's leading Liberl's commercial hub while still being in her twenties, but her critics changed their minds when she proved her competence as a leader. Despite her upper-class appearance, Maybelle isn't one to rule the city from an ivory tower. She frequently checks up on the affairs in town and makes an effort to inspect the market whenever she can and even whenever she can't, like during her church visits. She tends to play hooky from mass while having Lila and Sarah pray in her stead. This is also the case when Estelle, Joshua and Scherazard first meet her; rather than attending church she's busy scolding two merchants in the market for bad business practices.

Aside from her mayoral duties, she's still a very savvy businesswoman and while she leaves the daily management of the Anterose up to the restaurant manager, Maybelle likes to eat at other restaurants whenever she's away from Bose and if the food impresses her, offer the ones responsible for the food jobs at the Anterose. As a result, the staff at the Anterose is composed of people from all over the country and even beyond.

While Maybelle tends to leave the Anterose to Manager Lechter and the praying to her maids, she's still an extremely busy person who's usually swamped with work. While this frustrates her, she's also the type of person who thrives on having a hectic schedule. She's apparently like her late father in this way.

Even before being elected mayor, Maybelle was already one of the most influential people in the city due to her father, Windolman, being both the previous mayor and a wealthy businessman who owned several of Bose's most famous landmarks and also being on good terms with the influential Trino family. When he died, Maybelle inherited the business foundation, giving her ownership of the Bose Market and Anterose restaurant at the age of 21. While working to maintain and expand her family's business venues, she also managed to get elected to the office of mayor.

When the airliner Linde is hijacked by the sky bandits, the resulting ban by the Royal Army on any air traffic hits the city pretty hard due to goods no longer being flown in and out. In addition, the father of her friend Mirano was on the plane as well. Not content to just sit and wait for things to resolve themselves and not fully trusting the army to handle a job that's mostly about investigating, Maybelle put in a request with the Bracer Guild for an independent investigation. The request was taken on by Estelle, Joshua and Scherazard, who just arrived in Bose at the time.

Upon hearing that General Morgan was withholding all information regarding the airliner from the Bracer Guild, Maybelle mentioned to the bracers that her father had been a long-time friend of the general and as such she was a passing acquaintance of him. Deciding to take advantage of her connection with Morgan, Maybelle wrote a letter requesting information that she had the bracers deliver.

When the bracers are arrested by General Morgan for being at the wrong place at the wrong time, Maybelle drops by Haken Gate to smooth things over and she's able to secure their release. She also gets Olivier out of jail, who was imprisoned for drinking an extremely expensive bottle of wine (that Maybelle herself bid on) while working at the Anterose, and requests that he help the bracers with their investigation.

Eventually the bracers manage to track down the sky bandits, infiltrate their hideout and save the hostages, finally allowing Maybelle to get a decent night's sleep now that the hostages are back and the burglaries plaguing the town have stopped.

Estelle and Joshua later run into Maybelle and Lila again while attending the school festival at Jenis Royal Academy. Maybelle, having graduated from Jenis, still attends the festival every year. Though she usually finds school plays rather tiresome, she attends Estelle's and Joshua's performance anyway, taking a great deal of amusement from it.

Several months later, Estelle and Joshua run into Mayor Maybelle again after the martial arts competition in Grancel. Being a member of the Royal Assembly, Maybelle was somewhat forcibly invited to attend a dinner at the castle where Duke Dunan announced that he'd be succeeding Queen Alicia as ruler of Liberl. Like all mayors, Maybelle was quite shocked at the news. and was quite relieved when the coup that Dunan's announcement was part of was thwarted.

Maybelle returns as the mayor of Bose. When the city is attacked by an enraged Ragnard under the control of Leonhardt the Bladelord, Maybelle is devastated by the damage caused to the city and its buildings. She quickly tries to get a grasp on the situation and restore the markets to full operation as swiftly as possible to bring a sense of normalcy. Maybelle is increasingly concerned at the injuries Lila sustained during the attack and hopes the medicine she is taking has an effect soon. Maybelle works hard to prevent an uprising of scared an angry merchants.

When she is given the large chunk of Goldia, Maybelle pledges to use it well to restore the city's prosperity. When Lila's backstory is revealed, Maybelle professes that she has known and that Lila is very important to her. Maybelle seeks Lila and shows her the photograph, stating that she owes her a great debt.she urges Lila to 'reclaim her life' but is taken aback by her maid's feelings. They go to meet Corna together, with Maybelle stating she is the one accompanying Lila this time.

Artwork of Maybelle from Sora no Kiseki FC Evo 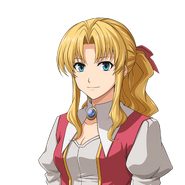 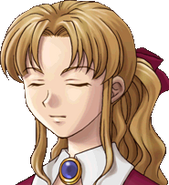 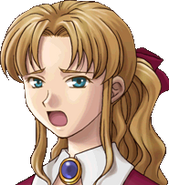 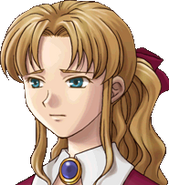 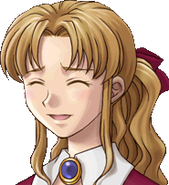 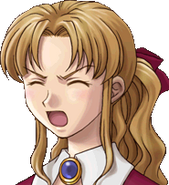 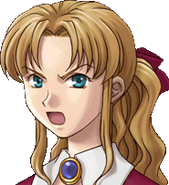 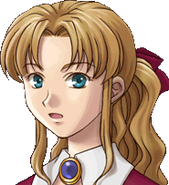 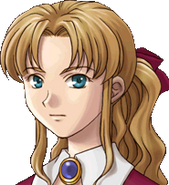 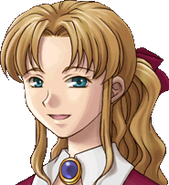 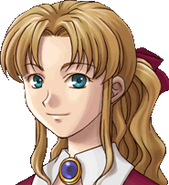 Retrieved from "https://kiseki.fandom.com/wiki/Maybelle?oldid=52034"
Community content is available under CC-BY-SA unless otherwise noted.