Demon sword Angbar
v · e
McBurn (マクバーン), also known as the Almighty Conflagration ()[Note 1] and the Blazing Demon (), is Enforcer No. I of Ouroboros, and its strongest member.

McBurn appears as a fairly young man with pale red eyes and blue hair with pink highlights, wearing half-moon glasses. Compared to Rean, who is "mixed" in his chest, McBurn is mixed throughout his entire body. He wears a long red shirt with strips of it flying loosely below his waist and nearly touching the floor, along with a loosely tied white and navy undershirt.

In his partial demon form, his hair turns white, glowing with a slight golden hue and his eyes become yellow. Glowing red tattoo-like markings appear on his skin.

In his true form, McBurn's hair and eyes remain the same color but he has sprouted some horns and a third, red eye appears on his forehead. His hair lengthens and red streams of energy flows from his body.

He wields the sword Angbar (アングバール),[Note 2], one of the weapons forged through Divergent Laws and handed to him by Ouroboros' Grandmaster. It is a large curved blade of black and red color, sporting severla spiked protrusions. When McBurn channels more power into it, it emits black flames with a purple glow around the eye.

Being one of the strongest Enforcers in Ouroboros, McBurn enjoys the thrills of combat and his primary motivation is to search for opponents that can force him to bring out his full power. As such, he will abandon missions that doesn't bring out the fire in him. He respects those that can give him a worthy fight, dislikes dishonorable tactics and mourns the loss of powerful fighters.

Originally Mera Cu Baldugh Ruang (メア＝ク＝バルウド＝ルアウング), Overlord of The Beyond (の) McBurn ended up in his current form after he collided with an ordinary human upon his visit to Zemuria in around S.1156.[1][Note 3] He would live without memories of his previous life for the next five decades.

It is unknown why or exactly when he joined Ouroboros. He joined it in or before S.1194, as he was involved in Ouroboros's raid on a rival organization in that year. He was one of the organization's three most powerful operatives; alongside the Seventh Anguis, Arianrhod the Steel Maiden, and Enforcer No. II, Loewe, whom he was well-acquainted with prior to his death due to his strength.

McBurn was one of the four Ouroboros members (along with Vita Clotilde, Duvalie and Bleublanc) who works alongside the Noble Alliance during the Erebonian civil war, in the society's efforts to advance their Phantasmal Blaze Plan (which McBurn isn't interested in as he only desires to fight a strong opponent). He first crossed paths with Class VII outside of Bareahard and fought them alongside Duvalie, fighting restrained at first, and then immediately overpowering his opponents after Duvalie was knocked down by them. During the game's intermission, aboard the Pantagruel, McBurn has a conversation with Rean wherein he reveals that Rean is "mixed" in a similar way to him (referring to Rean's ogre power that activates when he is enraged/passionate). However, Rean is only mixed in his chest, whereas McBurn is mixed in his full body.

He is last seen fighting Class VII in the third stratum of the Infernal Castle. There, they manage to force him to bring out his more powerful form as the Blazing Demon, wherein his hair turns gold and his powers are amplified. Just as Rean is about to summon Valimar, Victor S. Arseid jumps in to duel McBurn and allow Class VII to progress. McBurn summons the Angbar and then begins to fight Erebonia's strongest swordsman.

Although the match appeared to be a draw, McBurn's black flames caused Victor to suffer from respiratory problems and began his decline as a swordsman, which contributed to him being defeated by his student later on.

Alongside Arianrhod, Campanella and the Stahlritter, McBurn works to reclaim the Phantasmal Blaze Plan from Giliath Osborne, who stole it from underneath Ouroboros at the end of the civil war. He is first seen in Crossbell, looking to find Vita Clotilde who had since disappeared from the society. There, he fights and overpowers Class VII at Orchis Tower and later at Stargazer's Tower, working alongside Campanella both times. He participates in an experiment with the Aions in the area. He also appeared during the events of the game's third chapter in Lamarre Province, sparring with Wallace Bardias who is able to hold back his flames, and taking an interest in Gaius Worzel due to him having became a Dominion.

At the end of the game, he teams up with Arianrhod to guard the first roadblock inside the Gral of Erebos. As he summons Angbar, Gaius, Laura S. Arseid and Emma Millstein (carrying Vita's staff) decide to take over the fight to let the rest of Class VII continue inwards. When McBurn observed the apparent death of Victor when the Courageous exploded, he regressed to his normal form, regretful at never having got the chance to fight him again.

McBurn was impressed at the sight of the Ebon Knight, remarking that it might be capable of utterly overpowering him.

McBurn first combats the party at the Black Workshop where he fights alongside Ines and Ennea against Crow Armbrust, an enraged Rean Schwarzer and a turncoat Duvalie. Seeing Rean in an enraged state prompts McBurn to fight.

He did not participate in the attack on the Pantagruel, but appeared in a long-range communication, where he introduced Victor to the group.

McBurn is later deployed Orchis Tower, working with Victor to defend the Magical Barrier Generator from Class VII. He explained to Sharon that he was only interested in finding a worthy battle. Laura later broke the curse's grip on Victor after successfully replicating the Arseid school's signature move. As a result of losing Victor, Alberich sent a Leviathan-type Zauber Soldat to assist McBurn, but this simply enraged the Enforcer, who attacked the Leviathan. He was surprised that it possessed anti-magic armor, but before he could destroy it, the Vander family arrived and disabled it. McBurn then decided to withdraw out of respect for Laura and Victor. Seeing that the group could be potentially worthy opponents, he showed them a glimpse of his true form before he teleported away.

McBurn is then met as the final opponent in Tuatha De Danann that Class VII has to fight before reaching Osborne. Before the fight, he explains how he came to Zemuria 50 years ago from a world Beyond it, and how his normal body is that of a human from Zemuria. He also comments on how both the Salt Pale and the Gnosis drug used by the cult in Crossbell are tied to the Beyond just like him. McBurn knew that in order to regain his memories, he had to return to his "true form", and the transmutations the world underwent due to the Great Twilight and the ensuing Great War provided a perfect opportunity for him to do so without twisting reality and space, the way the Salt Pale did.

McBurn then fought the party in his true form as a demon lord, even withstanding an attack from the Originator Zero sword by Valimar. Afterwards, McBurn returned to his human form and confirmed having reacquired half of his memories. He withdrew his hostilities from Class VII, but was not willing to work with them to defeat Osborne due to his new goal of confronting Campanella, Vita, Mariabell Crois and the Grandmaster. He seemed upset with Ouroboros and Campanella, suggesting he realized he was manipulated by them. Before teleporting away, McBurn gave Rean a single-use power that he could use during his final Rivalry with Osborne and Ishmelga.

McBurn does not appear in the game's main story, however, a simulacrum of him that couldn't replicate his true form was briefly used experimentally by F. Novartis.

The actual McBurn briefly appears in the Postgame episode, arriving at the Celestial Globe. It is revealed that he received the Angbar 10 year ago from the Grandmaster, alongside Leonhardt who obtained the Kernviter. He expressed his suspicion on the Grandmaster’s true identity, but worried that he would not be able to maintain his human form once he knew who she truly is. He accepted his role as the “Guiding Flame” because he is beginning to like this world. McBurn expressed his displeasure against Novartis for creating a copy of him, without his permission. He expressed surprise at seeing the latest president of the Calvard Republic, Roy Gramheart, and his proposal that both sides do not interfere in the other’s plans.

He was somehow summoned to the Infinity Corridor, where he called a truce with the party and agreed to work with them. A copy of his true form is also encountered as a boss on one of the levels. 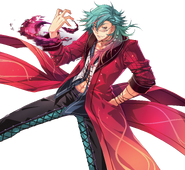 Memories - McBurn and the Infernal Castle

Introduction as the Blazing Demon

McBurn with Arianrhod at the Gral of Erebos

McBurn with Arianrhod at the Gral of Erebos 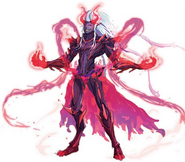 Concept art of his true form 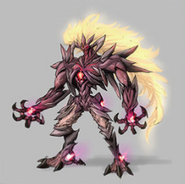