Kiseki Wiki
Register
Don't have an account?
Sign In
Advertisement
in: Characters, Kuro no Kiseki Characters, Almata,
and 4 more

v · e
Melchior (メルキオル) is the second-in-command of Almata who serves as the secondary antagonist of Kuro no Kiseki.

Melchior is a young man with red eyes and bright turquoise hair. He often stands and moves with a slumped posture. He wears a white shirt with a blue cross pattern and large hoop zippers, along with gray trousers with several belts. Melchior wears a long sleeveless black shirt over this. He wields a small red knife with a curved shape resembling something between a dagger and a boomerang.

Melchior is devoted his his boss's ambitions and ideology of bringing fear to the republic. He is quite jovial and manipulative whilst also displaying savagery. Melchior holds very little consideration for morals or compassion, willingly manipulating people based upon their insecurities and aiming to hurt people in the most acute way he can. He gets angry when his attempts to play with others' lives are foiled and uses murder as a first resort.

He is skilled in the use of large knives and bombs with different effects, as well as vicious combat techniques that crush his opponent’s body and mind. He seems to be taking on erratic missions, including manipulation, assassination, and sabotage, all in the name of fulfilling the boss’ wish of bringing 'fear' to the Republic.[1]

As a child, Melchior was originally a member of the assassination organization, the Order of the Moonlight Horse. It is speculated in Dingo Brad's diary that Melchior was trained by fellow Order member, Ellroy Harwood. When Melchior was 7 in S.1194, the Order was destroyed by Ouroboros. Per the whims of Harwood who had migrated to Ouroboros, the other remnants of the Order (including Melchior) merged with the remnants of the D∴G cult to form a new organization; the Garden. As one of the top members of Garden, Melchior was the Warden of the Garden of Thorns. Like all of the Garden's Wardens, Melchior wielded Artifacts in combat; in his case, bombs that can be created endlessly, and his dagger.

At sometime prior to the events of Kuro, Melchior joined Almata and acted as the right-hand man of its leader, Gerard Dantes, to whom Melchior swore loyalty. he woudl eventually bring the remaining wardens, Arioch and Olympia into the fold as well.

Melchior first appears in Creil, having recently murdered all of Eisen Schild's forces led by Aida, with help from Arioch and Olympia. He meets Van and the Arkride Solutions Office for the first time, who are actively investigating the disappearance of Aida. Melchior states he is a wanderer going from place to place for personal reasons, and points them in the direction of the Stone pillars as a site of interest. The party consider him strange, but move on. They later encounter Walter Kron who appears to be hunting Melchior. Aida reveals Melchior is a leader of Almata and one of the ones who attacked them. Melchior admits it and identifies himself, as well as the Oct-Genesis he is investigating that somehow brought Aida and the corps back to life as ghouls. He snaps the cords restraining Aida's men so he can watch the fight but flees when Walter arrives and begins to attack him.

Melchior makes a brief appearance in Langport, having given Walter the slip and deciding to check on how Viola and Alexandre were doing. He states he is only there to observe but cannot resist trying to kill the party and Maxim Rogan. Elaine Auclair keeps him occupied whilst the party moves on. later, melchior gets away and talks with the other overseers, stating how he found the perfect site for the boss to use later- Creil.

He next appears in Tharbad, directly assisting Gerard. He murders Gaspar Dillon for outliving his usefulness and paints a taunting message about the film festival in his blood. After a manhunt for melchior, he next appears at the side of Gerard in the Aljumeriah hotel, having unleashed madness on the city and taken the prince Sherid Asverl and Naje Berca captive. By drugging the pairs' drinks, he forces the party to fight them. After the party defeats Verethragnar, Almata reinforcements arrive by airship, cutting through the windows. Viola 'accidentally' strafes the bullets towards Melchior, which he dodges irritably. They escape via the airship.

In Basel, Melchior continues to pester the party, having been manipulating David Callaghan by playing on his insecurities and weaknesses. They use Callaghan to research and develop a reactor weapon. Tracking him down to the Aurora super terminal, Melchior lures Quatre Salision in only to reveal he planted explosives all over it. Risette Twinings takes the blast, receiving critical injuries and Melchior gets away by hanging onto Ishtanti, Olympia's Doll Artifact. They track him down to where Callaghan, now an AI, is finalising the calculations for the reactor weapon structure. Renne appears to keep him busy after an initial battle. When Callaghan loses and begins to lose integrity, Melchior ignores his pleas for help and cuts him loose and then leaves.

Melchior takes a backseat role in the death game in Oración, simply acting as a commentator and conveyor of the rules. He sits at the lap of Gerard within the Vashtar Palace Ruins whilst this transpires. A hologram of Melchior greets the participants as they clear each phase of the death game. When a Hercules unit breaches the rules, Melchior personally contacts the teams to scare them but eventually reveals that the Genesis presidingover the rules didn't think it qualified as a violation. He gets visibly irritated when Agnes Claudel finds a way to get the children out of the city via Sherid's Haurvatat. Elaine confronts Melchior and makes a deal with him to become the 20th team and enhance the game, in exchange for information regarding their sponsors- in this case her father, Edmond Auclair. Melchior agrees because the information is of no more use to him and he is planning on cutting Edmond loose anyway. He and Arioch teleport in to kill Edmond and depending on Van's choices, may inflict a grievous wound. Melchior blows up the office as he escapes with Arioch. Melchior witnesses the death of Gerard and laments his passing briefly before throwing bombs at his corpse and destroying the palace. he now remains the last member of Almata's leadership still active.

On Revolution Day, Melchior calls Van and summons Genesis Tower using the Seventh Genesis, freezing time, unleashing pandemonium and resurrecting or transporting the members of Almata. Melchior taunts the party as they progress through the city, but isn't confronted until the penultimate floor of the Genesis Tower. Melchior stabs himself to turn into an immortal, gaining markings and becoming The Madness of Avici, Demon Melchior (無間の狂気魔人メルキオル). He loses the fight, but in one last act of provocation, refuses to tell the party who 'C' might be before he vanishes into ether. 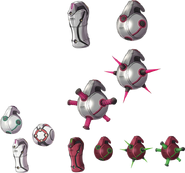