A man within his 30s, Gideon had curled blue-grey hair and violet eyes along with glasses. He wore a grey-turquoise military jacket with some light brown and white linings on the edges, attached by a tan brown short shoulder cloth with a gold pin and line attach seen across the front. Underneath, he wore a dark purple/blue uniform vest stretching down pass his waist, tan bare pants, and brown boots with protective cloth. He had a tan light-blue belt wrapped around his jacket, and also an arm cloth band with the insignia of the ILF.

Michael Gideon was an intelligent individual. He possessed an cold tactical mindset, however, he could be a bit melodramatic and often had others do his work for him. He was capable of holding his own in battle though and considered himself a patriot.

Michael was very vocal about his beliefs, to the extent that he could be described as a radical. He was very much devoted to Imperial Liberation Front's cause of eliminating Giliath Osborne, and was willing to do anything to fulfill that cause, even if it meant harming youths or going on potentially dangerous missions.

His main flaw though was that he was highly obsessive over his hatred of Osborne.

Gideon was a commoner by birth. Before he joined the Front, he used to be an assistant professor at the Imperial Academy in Heimdallr. Since he was focused on political philosophy, he was in the position to heavily criticise many of Giliath Osborne's polices and reforms, as they stepped on Erebonian traditions and beliefs.

By S.1201, Michael Gideon had begun a campaign of political activism against Giliath's policies and reforms by handing out flyers and publicly speaking about his disapproval of them. As a result of this behavior, Michael was dismissed from the university.

During his time at the academy, Michael authored a text titled Marching Towards Dystopia in which he criticised Osborne's actions. He was mentored by a fellow professor at the academy, Professor Carton, who thought his manifesto was absurd, never imagining that the scenario presented within it would come true.

Michael Gideon was first introduced as the shadowy operator behind the thefts that were plaguing Celdic. Gideon summoned Grunoja with his Demonic Flute artifact and coerced it into attacking Class VII. After Grunoja was defeated, Gideon left the party alone to avoid being detected by the Railway Military Police who had shown up to help Class VII. He was then later seen watching Class VII head home by train and meeting up with his leader, 'C'.

“The tyrant must yet face the merciless hammer of judgement.”
— Michael Gideon, Trails of Cold Steel, Chapter 1.

Michael Gideon shows up again during the terrorist attacks on the Calvard and Zender Gate Watchtower. During this period, Michael had masterminded both terrorist attacks, however he had used jaeger corp dropouts to do most of his work for him. He introduces himsefl while Class VII explore the Nord Highlands' Ancient Quarry. In his conversation with the dropouts, the dropouts were harassing him for the money that was owed to them. Gideon threatened to terminate their contract if they didn't comply with it. Gideon was unswayed by Class VII's arrival and calmly assessed the situation, pulling out his gun and attacking Class VII with the jaegers backing him up. After the battle, Gideon used his flute to summon the giant spider monster known as "Ginosha-Zanak" and ordered it to exterminate all witnesses as he escaped using his grappling hook. 'C' later complimented Gideon in his mission after checking up on him.

On July 26 S.1204, Gideon participated in an operation to attack the Imperial Royal Family and kidnap Princess Alfin Reise Arnor. After stealthily sneaking into the city unseen, Michael greeted his comrades in the Harbor and stirred them up with a rousing speech. He then waited until 2:24 pm, where he used his flute to summon crocodile monsters from the nearby river to attack certain pre-determined locations where each of the royals were. Bursting in through a hole in the floor, Gideon captured Alfin and Elise Schwarzer, holding them at gunpoint while firing at Carl Regnitz who had tried to stop him, while making his getaway through the hole with his hostages.

At the halfway point, Class VII demanded the release of the princess and Elise. Gideon pretended to surrender and stated that he would return the girls, if they managed to defeat the awakened the skeletal remains of Zoro-Agruga, animated by his flute. After the battle was over, Gideon exclaimed his shock when Class VII defeated the beast. Laura S. Arseid and Fie Claussell then took the opportunity to destroy Gideon's flute. Seeing that he was at a disadvantage, Gideon pulled out a knife and placed it over Alfin. He then declared that he was fully prepared to do whatever was necessary for the mission - even if it meant harming a Imperial. Gideon is then relieved to see his companions , C, Scarlet and Vulcan dropping down from above. Gideon agreed with C's request to release the prisoners and then escaped with his cohorts by causing a tiny cave-in.

A month later, after the attack on the Summer Festival, Gideon met up with his comrades again one last time in the Lunaria Nature Park.Gideon greeted Scarlet and Vulcan when they arrived and asked if they have completed their preparations. The two of them said that they did and Scarlet commented that Gideon should be worrying about himself, while Vulcan stated that he should have been the one going to Crossbell, not Gideon. He disagreed with his comrades' views, arguing that he had lost his flute, losing all value in the organization. C arrives and asked if he was sure about going through with it, and Gideon stated that he was. Gideon then reaffirmed his loyalty and his resolution to the ILF's ideals and goals. After a toast, Gideon then left.

Michael Gideon's death and what happens during the conference can actually be seen first-hand during the events at the Orchis Tower.

While he isn't actually shown at first, Gideon is first seen arriving in an airship alongside with a second airship from the Anti-Immigrant Order of Calvard approaching Orchis Tower. The two groups then start shooting up the windows, whose emergency shutters are compromised along with the other security systems by Campanella who hacks the Orbal Network. However, since the windows are made out of reinforced bullet-proof glass, the airships' guns are unable to pierce them. Once everyone had gathered at the back of room, a unknown male voice (implied to be Gideon) resounds, and he introduces himself and his comrades as the Imperial Liberation Front and their alliance with the Anti-Immigrant Order.

Gideon then proceeds to notify them of their intentions to take down their "sworn enemy," Osborne, while the Anti-Immigrant Order shouts out at President Rocksmith about how they will kill him. As the representatives are trying to figure out what to do, the ILF and the Anti-Immigrant Order land their aircraft on the roof. All of them then proceed to exit the aircraft after putting on their masks and head straight for the representatives.

As Alex Dudley is trying to figure out their next move, a shaking occurs and all of the shutters come down effectively sealing off the staircases. Outside the building, all of the reporters and army officers are trying to figure out what happened. Gideon and the other assailants are then seen engaging in battle with Dudley. Arios then shows up and helps the representatives to even the odds, and later Julia and Mueller join the fight as well.

The tide then slowly began to turn against the terrorists and both groups proceed to retreat underground into the the various Geofronts, with the Special Support Section pursuing the ILF down to Geofront Block D. Once there however, they find the Imperial Liberation Front has been ambushed and massacred by the Red Constellation who were employed and granted power of attorney by the Erebonian government. Gideon died along with them. 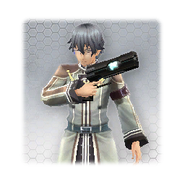 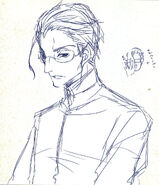