Michael is a tall man with lavender eyes and short blonde hair. He wears a variation of the RMP officer's uniform, consisting of their colour scheme but with a large grey and green overcoat over a black shirt and red tie. He wears white trousers and blue shoes as well as a grey-green beret. Michael uses an orbal pistol in combat, but occasionally can be seen with a four-barrelled rocket launcher.

Michael is a straight-laced devoted soldier. He is considered both professional and loyal. Despite his cold and hard exterior and dutifulness however, he does have a moral compass and sense of the right course of action when it counts.

Michael Rieveldt is a son of the Vice-President of the Rieveldt Company. They were always very close to the other Rieveldt family until the accident that took the lives of Claire's father, mother and little brother. After that Claire was taken in to their family and Michael was a reliable older brother to Claire.

Claire soon discovered and exposed her uncle's scheme in which Michael's father was selling low-quality Rieveldt products as premium ones, which Claire's father had tried to stop. Following the scandal, his mother decided to drop "Rieveldt" in favor of "Irving", with Michael following suit.

Michael joined the Railway Military Police around the same time as Claire Rieveldt, whom he considers a rival at heart. Michael is very strict with Claire and that is his slightly awkward way of being concerned about his adoptive sister.

During the Erebonian Civil War, Michael lent his support to the Imperial Army and fought alongside Olivert Reise Arnor when the military was overpowered.

The real purpose behind Michael's transfer to Thors Branch Campus is twofold. First, he is to monitor the principal and former provincial army commander Aurelia Le Guin. Second, he is responsible for using the classes of the school as counter-measures against the possible actions of Ouroboros and the Jaegers, of which he possesses special intelligence.

Michael is initially very straight faced and restrictive of the Academy's activities, imposing strict discipline and making sure things are done by the book, but over the course of the story he is whittled own by the eccentric methods of his co-workers and gradually softens up. His past with Claire is gradually revealed, with Michael constantly reminding her of her duty when she drops by and her treatment of Rean as if he were a replacement for Emil. When a music box that requires all of the siblings' birthdates to open is found at the Heimdallr Rieveldt headquarters, Michael cooperates with Rean to get it open, but in the process alerting Claire who works out what they are doing. Michael decides to spend a little longer with the Rieveldt company afterwards, and seems to have changed his perspective slightly.

Michael joins the battle at the Gral of Erebos supporting the Branch Campus as they distract the opposing forces including the Main Campus, red Constellation, Stahlritter and others.

After the Great Twilight, Michael decided to remain with the Railway Military Police and accompanied Thors Military Academy students and instructors to occupy Thors Branch Campus following the Great Twilight. Tracking down the fugitive Class VII to their meeting with Musse at the Osgiliath Basin, He had deployed railway guns to ensure that Class VII would not be able to escape. When the Pantagruel appeared, Michael quickly realized they were outnumbered and persuaded Cedric, who was leading the operation, to retreat.

Michael led Class I against Class VII at Einhel Keep, only to be defeated. He then continued to support the students rather than return to his duties. He is present at the Overture in Mishelam, where he talks with Toval Randonneur about how Aurelia Le Guin keeps forcing glass after glass on him when he prefers to take his time and enjoy the drink. On the day of the Great War and Operation: Shining Steel, Michael is present on the Courageous II and helps on the bridge.

Michael is planning on returning to the RMP full time after they are dangerously short staffed, but it allowed to continue as head instructor until the end of the term when a new instructor will take his place. Ash Carbide visits him in his office, where Michael comments on his growth. Michael attends the farewell for all the instructors that are leaving, including Towa and Randy.

Michael calls his sister Isara Irving about a particular matter when she is abducted whilst on the phone. Michael calls Claire urgently to help find her, which she does with help from Sharon and Sara, who track down Isara to the catacombs where she has been taken by a cloaked Emperor. Michael thanks them for bringing her to safety. Isara states she is going to take up the position of head instructor from Michael as per their conversations.

Michael and Isara accompany the Main and Branch Campuses onboard the Derfflinger and Ark Royal to the final battle against Reverse Babel. He gives the orders for the Soldats to launch. 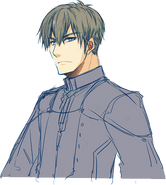 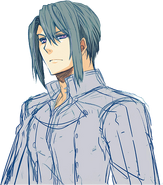 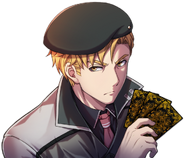