None
v · e
Mishy (みっしぃ) is a grey and white cat and the mascot of Nihon Falcom. Mishy was introduced in the series as the mascot character of Mishelam Wonderland in Trails from/to Zero and Azure. Mishy has also cameoed as a real cat in a number of Falcom games since such as their Ys series and Nayuta no Kiseki and is referenced in Tokyo Xanadu.

Mishy has a sister named Mishette and also a rival in the form of a mechanized version of himself called Mecha Mishy, who is later revealed to actually be his long lost brother, Mischneider. He additionally has an evil counterpart known as Evil Mishy.

Mishy is a tall gray and white bipedal cat with a large head. He used to have slanted eyebrows but the modern version has small friendlier ones. Mishy has a long gray busy tail with a white tip.

Ever optimistic, Mishy is a champion of justice and friendship to all. Children (and many who are older) love him and his antics. He can sometime be rather bumbling, as opposed to his more level-headed sister, Mishette.

During the Thors Academy Festival, Class V hosts a game called Mishy Panic. The prize is a Mishy plush and the objective is to use a large mallet to smash the Evil Mishy character popping out of holes, while avoiding smashing either the normal Mishy or Mishette, which results in a point deduction.

Laura S. Arseid notes that despite the character having originated in Crossbell, she sees him quite a bit in the Empire and admits a certain fondness for him herself.

A new show is held during the Summer Festival in Heimdallr, during which Mishy is unexpectedly challenged by an individual named Mecha Mishy who declares himself to be the real Mishy. He knocks Mishy to the ground, but Mishy is able to get back up thanks to the audience's cheers. He then tells Mecha Mishy that it doesn't matter which of them is real, and the two of the sing and dance together, chanting the catchphrase "Let's dance and make a wishy... with Mishy."

In Vantage Masters, if the player lands Mishy during the initial coin toss, they play first. If however, Evil Mishy appears, their opponent plays first instead.

On the eventide of Operation Jormungandr, the joint forces of Mille Mirage and Operation Shining Steel are given exclusive access for an evening of fun inside the park. During the event, a new show is presented. The show was originally not scheduled to begin until the next month, but brought forward for the event. In it, Mecha Mishy reveals that that he is actually Mishy's long-lost brother, Mischneider, much to the delight of both Jingo and Tio Plato, who are both great fans of Mishy.

Campanella and Mariabell Crois use magic to project an image of Evil Mishy onto the door leading to them inside Tuatha De Danann.

The Legend of Nayuta: Boundless Trails

Mishy is a rare creature, rarely seen by anyone. Mishy appears as a grey fur-coloured cat. It is marked by its cries of "mishishi". The innards of its ears are a soft red, just like a regular cat-based creature, and the ends of its tail in white. Mishy stands in the form of a human and never crawls on its paws.

Mishy is found in a number of colour-coded varieties and is used as material for the growth of your characters in the Training or Awakening menus. They each have different effects and there is a set Mira fee for using each of them. 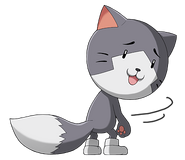 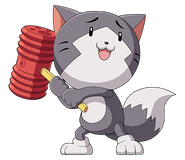 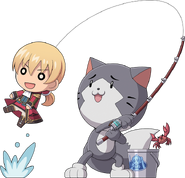 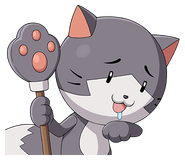 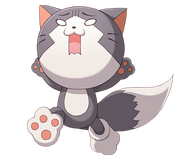 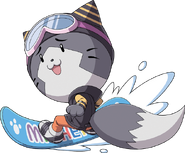