Monica is a young woman with medium-length red hair and pale green eyes. She wears the standard commoners' uniform for students at Thors Military Academy, consisting of a green and white blazer with padded shoulders, a brown pleated skirt with a chequered pattern and a red neck-tie.

Monica is initially a very shy individual and lacking in self confidence. At first, she seems like a quiet girl, who wants to work hard in her time at Thors. When she became friends with Laura, she started to help out in both the Swimming Club and other matters and gradually her confidence grew.

Monica enrols at Thors Military Academy and begins as a very shy student who keeps to herself. After admiring Laura S. Arseid at a distance, she eventually musters the courage to join the swimming club, wherein she builds a strong mentor-mentee relationship with Laura and gradually builds her own confidence and self esteem.

She was taken in by the 4th division at the outset of the October War. After learning that Laura was safe and sound, she joined in the efforts as part of the Third Way, delivering food to those taking part in operations until it was time to retake the Academy. Monica becomes a proficient swimmer by the time of graduation, making 50 arge independently and remains friends with Laura after they move on from the academy.

After graduating, Monica started working for a welfare organisation in North Ambria.[1] During the Great War, Monica is one of the unseen Thors Graduates that helps on board the Ark Royal. She says to leave the surface to them and as fellow graduates and colleagues, she'll support everyone with everything she has. 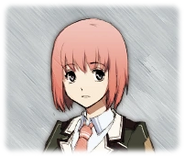 Retrieved from "https://kiseki.fandom.com/wiki/Monica?oldid=65191"
Community content is available under CC-BY-SA unless otherwise noted.