Defense
v · e
Morgan (モルガン), also known as the God of War (), is the former, long-serving Chief of Staff of the Royal Army of Liberl.

General Morgan is a elder man with grey hair and a full beard and moustache. He wears the standard uniform of the Royal Army of Liberl, which consists of a green and white top with padded sleeves, matching boots and navy trousers. General Morgan also wears a red shawl over his left shoulder and several belts crossing over. General Morgan uses a great axe in battle.

General Morgan is a stubborn and obstinate man, yet full of a warrior's pride and honour. He bore a grudge for many years against the Bracer Guild following Cassius Bright's departure from the military.

Morgan is best known and praised for stopping the invasion of the Imperial Army of Erebonia in S.1192. As a General, he was responsible for executing the counter-attack devised by his subordinate, Colonel Cassius Bright. In an attempt to repel Liberl's counter-attack, Erebonia bombarded the City of Rolent.

Colonel Bright's wife, Lena, was caught in the rubble in to protect their daughter. This caused Colonel Bright to retire from the army and join the Bracer Guild. Morgan never managed to accept his departure and continued his line of duty with a grudge toward the Bracer Guild for over ten years.

He also organized a defensive line near Ravennue Village. Although the line was meant to protect the village, it only caused the fighting to spread there. Numerous villagers were killed, including Agate's sister, Mischa. A memorial for the victims was erected sometime after the battle. Regretful for getting the villagers involved, Morgan would annually head to the village to leave behind flowers and pay respects to the deceased.

After the end of the war, Morgan and his wife Katrina took in one of the children, Dalia, that was orphaned during the war. They live in the North Block of the City of Grancel, next to the Grancel Cathedral.

General Morgan is introduced at haken gate as the leader of Liberl's military forces. Estelle and Joshua Bright , aware of his animosity towards bracers, keep thier affiliation hidden when they try to extract information about the the Capua Family from him, but are found out, earning his ire.

Morgan's change of heart started during the Intelligence Division's attempt at a coup d'etat in S.1202. Reluctant to give in to their demands, Morgan was imprisoned at the Haken Gate and his granddaughter, Rianne, taken hostage.

He is saved from imprisonment by his former subordinate Cassius, now a bracer. He also learns that his granddaughter was rescued by Estelle Bright, Joshua Bright and Zin Vathek, also bracers. Morgan later thanks them.

Morgan is then tasked on behalf of the Royal Assembly with the reorganisation of the Royal Army, assisted by Brigadier General Bright, who decided to join the army once again.

Following the awakening of Ragnard, who attacked Bose and Ravennue Village, Morgan sortied the Liberlian Air Force to track the dragon down, albeit with little success. He arrived after encountering Estelle and the others in the mining pit, where he orders his ship to attack Ragnard, causing Loewe to retreat with it.

Upon landing, Morgan informs Estelle to let the "professionals" handle the dragon despite her and Kloe's objections. Agate, recognizing Morgan as the man at Ravennue ten years ago, confronts him and in the ensuing tirade, blames him for the suffering he had caused. Estelle, then asks Morgan what Agate meant. Morgan brought the group back to Ravennue Village, where he told them about his disastrous defensive line to protect the village that resulted in Mischa's death. He also accepted a joint army-bracer operation seeing that the bracers could reach areas the army would be slow in.

He later allows the bracers to go after Ragnard after an operation to subdue it failed and caused it to retreat into the deepest parts of Nebel Valley, but warned them that the air force would be on standby should they take too long or fail. The bracers were able to free Ragnard from the Gospel, upon which it encountered the air force. Morgan learned about the incident from Estelle and the others.

A week after Ragnard was freed, Morgan visited the memorial to pay respects and leave behind flowers. Agate and Tita arrived while he was paying his respects. Morgan noted that Agate was much calmer than before. Loewe arrived soon after the pair. Morgan asked why someone like him was working with the society, but Loewe soon reminded him about his forced silence about the Hamel Tragedy which shocked Morgan. Agate asked Morgan what Loewe meant by that, but Morgan refused to tell him, citing international security.

Following the dragon incident, Morgan announces his resignation as the Chief of Staff in favour of newly-promoted General Bright. Morgan temporarily reassumed duties however following the Orbal Shutdown Phenomenon, where Cassius "shoved the details" to him to find Ragnard, which allowed Cassius to save his children from the collapsing Liber Ark.

A copy of Morgan is created within Phantasma's Sixth plane, the Impregnable fortress. This copy is incredibly annoyed at being a puppet and forced to fight, but is powerless to do anything about it until Kevin's party successfully defeat him and he vanishes. The copy wields an axe that he states hasn't been used since the martial arts tournament two years ago.

His alias is "God of War", while Baldur Orlando's title is "War God", making it the only duplicate alias in the series. They have different kanji in Japanese. 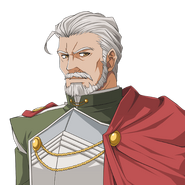 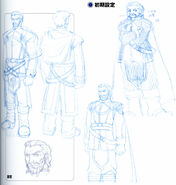 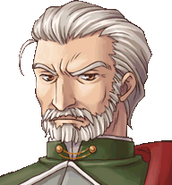 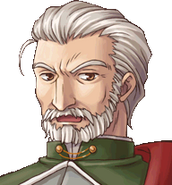 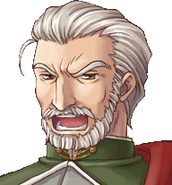 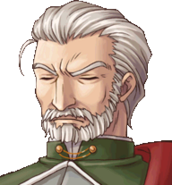 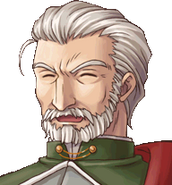 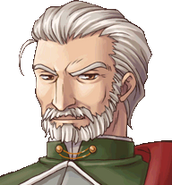 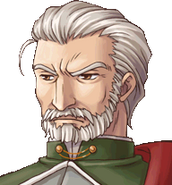